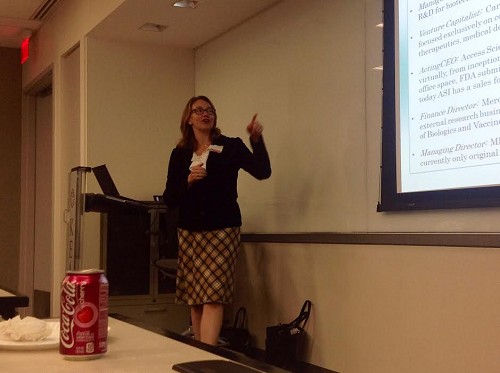 Rarely are entrepreneurs given the levels of insight that were offered at the Launch NJ: Life Sciences Hub meetup on Oct. 6 at Kean University, “Principles of Fundraising: Venture Capital.”

Janelle Anderson, Ph.D., managing director of  MRL Ventures, a Merck Corporate Venture Capital Group, started the meeting with a detailed look at the steps venture capital (VC) groups must take when deciding what companies to invest in.

Clark Smith, a venture officer in the Technology & Life Sciences Division of the New Jersey Economic Development Authority (EDA), rounded out the presentation with advice on how to approach potential investors.

Anderson, who received her Ph.D. in chemistry from Harvard, started her career as an academic inventor in Harvard’s Whitesides Research Group before turning her attention to the VC world,  becoming the acting CEO of a portfolio company.

MRL Ventures, she said, is unlike traditional VC groups. With all the in-house expertise at Merck, she can call on any subject-area expert she needs to help her make decisions. She doesn’t have to go outside the organization.

The fund also has a $250 million dollar war chest. As a result, venture officers don’t have to spend time raising funds; instead, they can just focus on finding truly “breakthrough” science, she noted.

The two groups may perform similar activities and share information about them, but the MRL Venture Fund deliberately looks beyond Merck GHI’s current areas of research and development, focusing instead on up-and-coming areas that might be a little more risky, but offer real breakthroughs if they succeed, she explained.

It is breakthrough research, rather than incremental learning, that’s at the core of the fund’s investment strategy, Anderson continued. This philosophy guides the review process, starting with the initial interest, and proceeding through prioritization, scientific review, business review, recommendations and, finally, the execution of the deal. The vast majority of potential deals fall by the wayside.

As a result of its higher risk tolerance, the fund deliberately acts as a sort of hedge against Merck GHI’s current research and development biases. Unlike traditional VC groups, which prioritize the acquisition of a seat on the board, so that they can influence the investment and take as large a stake in the company as possible,  MRL Ventures may not take a board seat, and often limits its investment to less than 20 percent, so as not to exert undue influence on the company.

Anderson explained that the fund’s sweet spot is the Series A investment. VCs typically look at companies that already have $1 million to $10 million invested in them.

During his presentation, Smith agreed with Anderson. In the life sciences area, the typical VC investment occurs after at least $1 million to $3 million has been invested, he said. The very first VC investments that an entrepreneur accepts should be a strategic investment from someone who offers more than just money, Smith noted.

This is because “venture money is a passive investment,” Smith explained. Unlike an early angel investor, who may be willing to help guide an entrepreneur, VC investors are only interested in knowing that you’re on the right path. They want to just throw money at a company, and then be able to sell it soon afterward. This is why most VC investors often demand a seat on the board and a want a controlling interest in the company.

According to Smith, for many VCs, the fact that an entrepreneur has failed in the past and learned from those mistakes is important because it makes that entrepreneur less of a risk. VC groups don’t want an entrepreneur to get educated on their dime. Instead, they want people who know how to execute their ideas and who will make them a lot of money.

One of the most important things Smith wanted the audience to understand was that “raising money is hard work,” and he encouraged them to “do your homework.” Entrepreneurs seeking a VC investment should know as much as possible about the investor they’ll be speaking with, including that investor’s own priorities. Every entrepreneur should also be ready with a professionally prepared and well-rehearsed presentation.

Also, the reality is that 98 percent of VC deals come through referrals (called “inbound deals”) from people the investor trusts. For this reason, an important focus for any entrepreneur should be on building relationships, so that the entrepreneur’s own company is the one that’s trusted and referred.

Previous: Interview: Montclair State Grad Matt Cartagena Discusses His Startup Accelerator Book
Next: Opinion: A Lot for NJ Tech Industry to Like in Kean Collection of Bills to “Foster Innovation”