Home » News » What Does a Trump Presidency Mean for Innovation and Entrepreneurship? Panelists Don’t Know 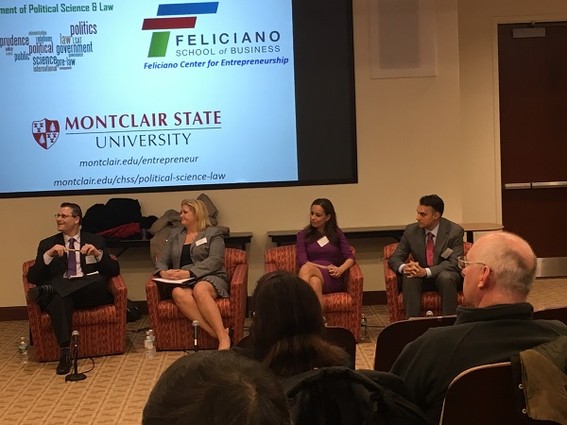 No one really knows what President Donald Trump’s policies will be towards startups and innovation.

That was the underlying message of the Montclair Entrepreneurs meetup on January 31, entitled “Trump’s First 100 Days: What It Might Mean for Innovation and Entrepreneurship.” The meetup was hosted by the Feliciano Center for Entrepreneurship, part of Montclair State University’s School of Business.

The Feliciano Center pulled together a lineup of experienced panelists moderated by David Postolski, a patent and intellectual property attorney and partner at Gearhart Law, in Summit. The panelists included two political strategists/consultants, Democrat Julie Roginsky and Republican Michael DuHaime, as well as  Brigid Callahan Harrison, professor of political science and law at Montclair State.

Introducing the panel, Dennis Bone, director of the Feliciano Center, said that he didn’t know how specific the panel discussion would get, but “the folks on the panel have the ability to interpret [Trump’s] policies and help us along a little bit.”

“We know that Donald Trump is probably a master entrepreneur, and he is a master brand strategist … he had a show on TV teaching people how to be the next entrepreneur,” Postolski said. He can also be seen as a master disruptor. Postolski asked the panel how those qualities relate to how he’ll affect innovation and entrepreneurship in America.

Harrison said, “I’ll tell you right off: Anyone who tells you what the impact of the Trump administration will be on any specific field is lying to you. No one knows.” She added that she believed Trump would have some positive consequences for some people who’ve been disrupted by the new economy.

“He is a traditionalist when we look at his personal business dealings. … He has talked a lot about industrial economies,” and his base of supporters includes “individuals who are in traditional industries. He also has a Congress that is looking out for the industrial sector.”

Roginsky agreed that no one really knows what Trump’s impact on startups and entrepreneurs will be. “There are no ‘knowables.’ How that impacts investors and entrepreneurs and people who are investing not just time, but money, is something that I think is unknown and unprecedented [in my lifetime].”

“I agree with Julia, that the ideologies of the last two administrations were fairly clear,” DuHaime noted. “I think, from a business point of view, at the end of the day you have a pragmatic, 70-year-old, New York man who ideologically for most of his life was seen as fairly centrist, especially when it came to business ideas, who does respect entrepreneurs and who sees his peer group as CEOs. I think business leaders will have a great deal of influence with him. He does not see senators, governors or members of Congress as his peer group.” Peter Thiel, for example, has a great deal of influence, DuHaime said.

Later on, when he needs votes in Congress, which he doesn’t need now because he is using executive orders, you will see Trump’s more pragmatic side, he predicted.

What’s probably most troubling for people in business is the new administration’s lack of a business philosophy. If there were a philosophy that businesses knew would be there for the next four years, businesses could adjust, she said.

During the campaign, Harrison added, Trump didn’t talk a lot about technology or champion innovation. In New Jersey, Trump was involved in traditional economic development, such as golf courses and hotels.

As a disruptor, Trump could have a negative effect on business, she indicated. “Many businesses thrive in an atmosphere of predictability, and predictability means increased assets for investments in startups, and small businesses and entrepreneurial endeavors. To the extent of which the economy itself is disrupted … in my view some people, not all, may pull their assets in and behave more conservatively.”

Asking a question about the Trump administration’s immigration policy, Postolski noted that New Jersey has the highest percentage of startups created by foreign nationals.

DuHaime prefaced his immigration remarks by saying that, in the first weeks of the administration, some of the things Trump has been doing point to deregulation and more emphasis on infrastructure investment. “I think a lot of Republican business folks like that.” A lot of CEOs are waiting to see what he plans to do with the Affordable Care Act and Dodd-Frank [Act], as they see these developments as “government getting off their backs a little bit.”

“When it comes to immigration, it starts to obscure” those plusses, he said. “I think it’s problematic. The overall messaging that comes out of that isn’t overall helpful in terms of us being a welcoming country in terms of people who want to make America better and invest their lives and funds here. My hope is that we can strike a balance because a lot of people thought the first few days were good in terms of deregulation.”

Later, DuHaime noted that he believes the Trump administration will target companies that have transferred American tech jobs overseas. But, “what shape that takes and how that impacts legislatively, I don’t know,” he said.