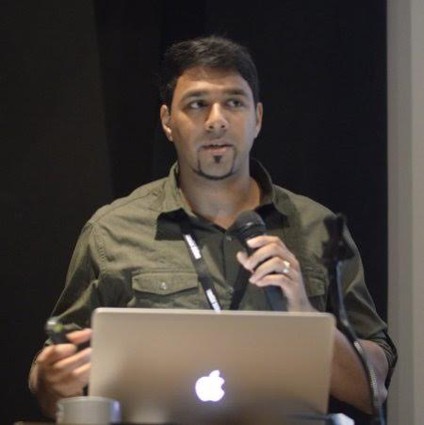 [From time to time, NJTechWeekly will be reposting stories written by Tom Morford for Cowerks, the Asbury Park coworking space. This post, an interview with Carponents founder Robin Bhattacharyya originally appeared in the online Cowerks Makers & Shakers magazine.]

When talking with Robin Bhattacharyya, we whimsically asked ‘how many tennis balls can you fit into a limousine?’

As Founder of Carponents.com, a social site for car enthusiasts and one of the biggest automotive databases on the internet, Robin knows his cars.

“I would see how many I could fit in one seat’s worth of cubic volume, then I would go into my own database and figure out the answer for the remaining space. Is the trunk included…,” Robin said in between laughs.

(His final answer was 3200 in case you were wondering).

Before Carponents, Robin was a developer and software engineer at a lot of startups. “You have to wear a lot of different hats – not just programming, but sales calls, trade shows, networking,” Robin said.

“I learned a lot but always wanted to do something on my own – and cars always really interested me,” Robin admitted.

Carponents has taken off in recent years but didn’t always drive on smooth roads. The trail was rather bumpy at first. “We tried launching a place on our site where users could buy and sell parts. But it totally failed,” Robin said. “We didn’t have the follower base to sustain the feature on the site yet.”

At one point Carponents was a member only site, but the exclusivity didn’t have traction. Car enthusiasts are a part of a free-flowing community that is really inclusive. Carponents has since evolved into a place that allows people to come and read information, but in order to leave comments you need an account.

“Constantly getting user feedback has been really important,” Robin claims. “We’ve learned to focus on what works and get rid of what doesn’t. A lot of our ideas come from talking to our users.”

Listening to wants of the car enthusiasts led to many successes. Robin and his team recently rolled out something called a Modscan Decal (it goes on your bumper) with an embedded QR code, allowing people to pull up all sorts of information on any given car.

“We’ve compiled one of the biggest automotive databases on the internet and have a few databases that feed into our own. Licensing it out to people who need it adds a revenue stream that we didn’t originally think about,” Robin said. “We could create API [Application Programming Interface] so people can utilize the data to its fullest potential.”

So many possibilities, so little time. Carponents has a following now – and with a group of such devout car enthusiasts, Robin can work on expanding his ideas.

One of the problems Robin faced early on was space. With 5 coworkers on his team, it was hard to communicate and hash out ideas while working remotely. They needed a place to meet.

“So I started out having people come in and use the conference room space and then it transitioned into a great office for myself instead of home,” Robin explained. “Cowerks is a great place to sit at my desk, focus in and code for hours.”

Functionality turned into fun when Robin started new side projects within the coworking space.

“I started teaching for Sprockets (a coding for kids program run by many of the developers housed in Cowerks), too, and enjoy the whole experience.”

For Robin, Cowerks is more than just desk space to get his work done.

“Cowerks has helped in so many ways – it’s a hub of business and entrepreneurial minds,” Robin said. “I’ve always had someone to bounce my ideas off of.”

“It comes down to speed,” Robin admitted. “We [the Carponents team] want to get what we do to the clients as fast as possible.”

Robin is always working on new ideas for Carponents, whether they are suggested by enthusiasts or generated within the team.

“The biggest thing for 2016 will be the launch of our app,” Robin said. “Everyone is asking us for iOS and Android apps – so we’re going to give them what they need.”

Robin loves his work, he wants to put the time in and make his company the biggest in the space.

“Even though it’s 10 times more work than I used to do at any startup, it feels good to build something that’s making a difference. You’re building your baby,” Robin said.

Robin works hard to see his dreams come to fruition, but he isn’t a workaholic either.

“When I’m not working, I run on the boardwalk. And drink beer. Sometimes both at the same time.” Robin then told us about these things called Hash runs – they sound awesome.

What better place to run and place to drink beer?
Carponents will start hosting their own car meets starting in early October. However, Robin might run to the events – not drive.