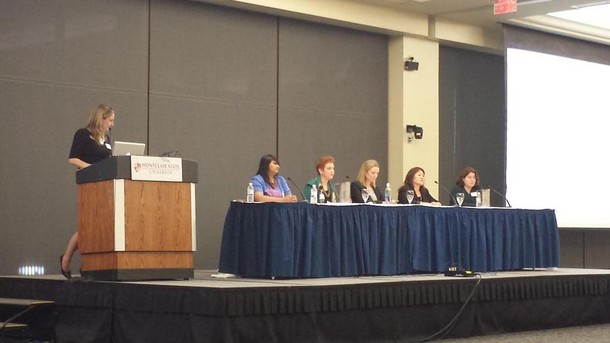 Jinisha Patel, a student at the New Jersey Institute of Technology and an organizer of the International Women’s Hackathon, says that getting more girls interested in science, technology, engineering and math (aka “STEM”) begins at home.

“It has to start with how we are raising our children,” she told an audience of about 150 men, women and children on Oct. 16, at the Montclair State University “Big Dreams in STEM” panel discussion, a part of the school’s Women Entrepreneurship Week.

“I see that if something is broken in the house, parents go to the boy,” said Patel. “If you keep saying ‘no’ to a woman, she gives up.”

Patel’s comments followed a screening of clips from the documentary Big Dream, which tells the stories of seven young women who are overcoming challenges to follow their passions in STEM fields, which continue to have a paucity of women.

The film is part of Microsoft’s Big Dream Movement, which brings organizations, academia, and resources to girls around the world, to help them pursue a future in STEM fields.

Montclair State’s Meiyin Wu, Ph.D., a professor of biology and molecular biology, and director of the Passaic River Institute, said passion needs to be harnessed to overcome society’s usual expectations of girls.

“I grew up in a traditional Chinese style,” she said. “My parents encouraged me to be a nurse, not a doctor, to be a teacher, not a professor.

“You have to love what you do,” she continued. “Only when you have the fire in the belly will that push you forward and make you successful. You have got to have something that really interests you. If you want to make it happen and enjoy what you are doing, you will be successful.”

Asked by moderator Nicole Bryan, Ph.D., a professor at MSU’s School of Business, how to encourage new pathways for girls into STEM, Patel replied that girls require our support.

“We need women to be programmers, and it is sad to see that girls don’t think they are good enough to do that,” she said.

Mentorship — specifically, the right kind of mentorship — is a key to bringing about change,  some panelists noted.

“With mentorship, women have very different needs than men,” said Katherine Herbert, Ph.D., associate professor of computer science at MSU. “A woman in the field needs to feel that she is a part of something, no matter what, even if it is an exercise class. If you feel like an outsider, you won’t do it again.”

Herbert shared her own feelings of not being a part of the “group,” and how it had almost derailed her career.

“When I did my Ph.D., it was 98 men and me,” she said.  “That first year, I considered giving up. But I found a wonderful mentor who helped me focus. A mentor doesn’t need to be a woman, it is anybody who cares.”

A good mentor, Herbert said, will “let you know you are not alone.”

When an audience member asked what can be introduced to girls to get them excited, Wu noted that, girl or boy, getting in touch with one’s passion is essential.

“It doesn’t matter what age, what gender,” she said. Letting them “try it on is the key. I do that with all my children and all my students. I say, ‘Try them all, try every single project, and you tell me what you like. Tell me what direction you want.'”

“I think technology is viewed differently by men and women,” she said. “When you think about computer science, men are usually interested in the computer itself, making something more efficient, for example. Women may ask, ‘How can I use this capability to achieve something?’”

For example, she said, two women in Big Dream were developing an application to help children with dyslexia. “I think men and women are approaching technology from different perspectives,” she said.

It’s also important to realize that men and women have unconscious biases that need to be acknowledged and discussed, said Lauren Gula, manager of social sustainability and women’s empowerment, United Nations Global Compact.

“We work with 800 CEOs, and we get those companies together to discuss what are the barriers,” she said. “Unconscious barriers are the most dangerous in some ways. Everybody has biases, we come from different backgrounds.” Acknowledging the bias, she said, is an important first step toward change.

Previous: Looking Back on Hurricane Sandy and the Tech Community
Next: Successful NJ Angel John Ason Tells All at NJEN September Meeting