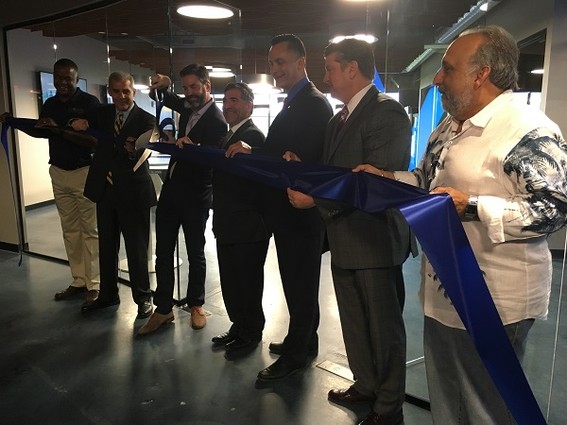 WorkWave cut the ribbon on its new headquarters at Bell Works in Holmdel on May 17, and marked the occasion with speeches by public officials and others who helped make the day possible.

When WorkWave signed on to move to Bell Works, the announcement was hailed by the New Jersey tech community as a sign that this revitalized Bell Labs building could become a suburban tech hub.

Since then, several tech and telecom companies have committed to leases for space in the building, including iCIMS, which will bring more than 550 employees to Bell Works and is growing quickly.

WorkWave moved 180 employees to Bell Works and plans to hire 250 additional workers over the next three to five years.

Chris Sullens, president and CEO of WorkWave, recalled his first impressions of Bell Works. “It was a long way from reality. It was just pictures on a wall and “it felt far too far in the future.” The company evaluated options like taking more space in its current building or moving to a building in Fort Monmouth.

“Over time, we circled back to Bell Works.” The company needed 70,000 square feet in an open floor plan “because that’s the way we work, collaboratively,” and there were very few buildings that fit that bill.

“The vision that Ralph [Zucker] laid out resonated with us.” The location was great, he added, only 10 miles from the company’s previous headquarters. The deal with Bell Works gives the company access to 70,000 square feet of additional space if needed in the future.

There still was another issue, he noted. Retail stores didn’t want to come in until most of Bell Works was filled. A hotel wanted to come in, but not until there were more tenants. “Someone had to go first and we took the leap. We looked at the future. Our goal was to set ourselves up for the next eight to 10 years. There are now four anchor tenants, and a lot of the building is full. Retail is starting to come in.”

Speaking to the assembled group, Zucker, who is president of Somerset Development (Holmdel) and the visionary behind the redevelopment of the historic building, said, “When we first set out to transform Bell Labs into Bell Works, it was challenging in many ways, beyond comprehension actually. The most challenging aspect was not figuring out what we could do, it was convincing other people, bringing other people into our vision.” That vision was to develop a “metroburb, a metropolis in suburbia with a dynamic urban vibe in a great suburban location.”

He said that it took guts for Sullens to invest in the Bell Works vision, especially when the building was huge, vacant and abandoned.

“WorkWave was exploring several options, and they probably would have been easier and less expensive. But Chris didn’t take the easy way out. He chose Bell Works and the ecosystem of creation and innovation. They wanted more than just four walls and an office. They wanted to be part of a vibrant and growing ecosystem that provides a daily dose of culture, entertainment, collaboration and so much more.”

Timothy J. Lizura, president and CEO of the New Jersey Economic Development Authority (EDA), talked about the role of the EDA in transforming Bell Labs, under the state’s “Grow NJ”    incentive program. WorkWave received a $15.7 million incentive from the program to relocate its headquarters in Bell Works and grow jobs there.

“We’ve approved three companies for Bell Works, iCIMS, WorkWave and MetTel, with over 1,500 jobs” so that they can “seed the foundation for what will be a technology hub here in Monmouth County again. I think that’s a terrific start,” he said.

Addressing the group, Senator Joseph M. Kyrillos Jr. (R) supported the Grow NJ program, saying, “It’s easy to criticize the EDA, that we are giving away the store, that it’s corporate welfare. This is what it amounts to. None of these companies would be here today without this great Grow New Jersey incentive program. This is testimony to the essential nature of this program. It’s essential [to provide incentives] when you live in a high-tax, big-regulation, high-land-cost, high-insurance-cost place” like New Jersey. “We have to find a way to compensate [companies] and make a deal.”

The mayor of Holmdel, Gregory Buontempo, received thanks from Sullens for helping to make the final details of the move easier for WorkWave, ensuring that inspections and approvals were done in a timely way.

“WorkWave didn’t have to come to Holmdel. It chose to come here,” said Buontempo, who praised Holmdel as a great town. He also lauded the rebirth of technology innovation in the state. “New Jersey technology actually changed the world. I call what is happening here a renaissance. … I think we are in the next stage of great companies coming in here and continuing” the legacy of developing technologies “that will change the way we work, live and play.”

Previous: AI and Robotics Will Disrupt Future Jobs, but How to Prepare is Still a Question
Next: Push for Emergency Responders to Report Data in New Statewide System