Home » News » 2016 to be the Year of the NJ Tech Startup Ecosystem, Phone.com’s Rabban Predicts 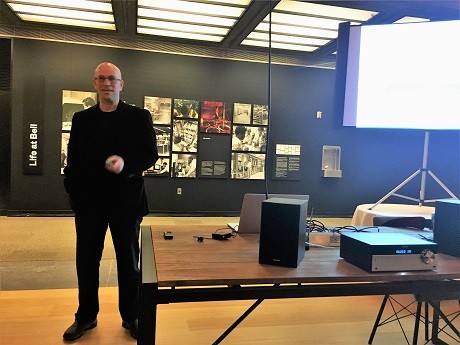 “You don’t have to wait for a tech ecosystem to develop in New Jersey. We have one now,” Ari Rabban, cofounder and CEO of Phone.com told entrepreneurs at the NJ Strategic Design + Tech meetup on February 3.

Rabban spoke on the topic “Why Now is a Great Time Have a Startup in NJ” to an audience of about 40 people at Vi coworking space, at Bell Works (Holmdel).

Rabban said that a grass roots effort has really changed things for the New Jersey tech community. “You can’t help but be enthusiastic when you see what is happening,” he told the group.

After the telecom bust that saw New Jersey’s tech workforce shrink dramatically, Rabban was on a high-level committee that included professors from Rutgers and officials from the state government, including former Governor Jon Corzine. Rabban said that most of the people on the committee were trying to figure out ways to make Verizon and AT&T hire again.

“I was thinking, ‘this is so wrong.’ It just can’t happen this way anymore,” he said. A new way of developing jobs —  through entrepreneurship — needed to be encouraged.

Entrepreneurs in the state began doing something different about five years ago, Rabban observed. The grassroots movement began with the tech startups and included the NJ Tech Meetup in Hoboken, which was a pioneer in New Jersey. He urged members of the audience to go there.

“The atmosphere is amazing, and it gets national write-ups because of the community that has been built.” But getting national press publicity for New Jersey’s cool technology companies remains a problem, Rabban noted.

At tech meetups, be generous and share your ideas with others, he advised. “Nobody is going to steal them. The worst thing is that they will listen and move on, and in the best case they’ll say that they know someone you can talk to, or they’ll become your partner and you’ll have a real business.”

Rabban used an example from his own experience to illustrate how the tech ecosystem in N.J. works. “I met the guy [Aaron Price] who runs the NJ Tech Meetup at a New Jersey Tech Council event at NJIT,” Rabban said. Through him I also met David Sorin,” his lawyer, the founding partner of the SorinRand law firm, now part of McCarter & English.

Price introduced him to someone from the New Jersey Economic Development Authority (EDA) who was attending a meetup, and things progressed from there. He described the EDA as a quasi-government agency that has a huge fund for tech startups, “and not every state has this.” If you are “vetted by a VC firm and get some money, they will match it up to a point,” he said.

All of this happened because Rabban became involved with the fledgling New Jersey tech startup ecosystem.

He noted that the New Jersey Tech Council took a big hit as telecom jobs moved out of the state because the council had been catering to the old model of doing business. But the NJTC is getting interesting again, he said. It’s now more capable of working with smaller companies. He added that Maxine Ballen, the organization’s founder and 18-year CEO, had noticed that the old NJTC model needed to be updated, and she stepped in to change it. Now the torch has been passed to CEO James Barrood, who is continuing to transform the organization.

Many entrepreneurs look to the state to help them, but he pointed out that you can’t build an ecosystem from the top down. He called this the myth of “if you build it, they will come.” What is needed is entrepreneurs who can build cool startups that will draw the attention of VCs who would then open offices near the innovators. Rabban, who comes from Israel, said that there “isn’t a major VC that doesn’t have an office in that tiny country,” which is creating and building cool companies.

He noted that, in addition to what’s happening in the state, it’s now easier to start a business than ever before. For a tech business, all you really need is a laptop and an idea, he said. And coworking spaces are inexpensive places to get started.

Coworking spaces make sense for startups; and if a startup’s idea doesn’t pan out, the founders  can often find other startups to work for at these places. “Go work for a startup business,” Rabban urged. Don’t look for “real companies.” With the volatility in the market, “there is no such thing.”

He advised startups to look to online services for their needs, including such sites as LegalZoom and his own company, Phone.com. Surveys online are cheap to do, and for a few hundred dollars you can do quality assurance testing, he said.

Don’t wait for VC money, he implored. “When people meet me and they know I have a VC, all they want is an introduction. The chance that any VC will look at you is a very low percentage. Not everybody needs it. If you have some revenue, move on. Maybe the money will come later for growth.”

During the event, Rabban noted that his own journey as a startup founder wasn’t typical. He had a shortcut to success, he said. He was able to partner with the owner of the domain name “Phone.com” to cofound the business.

Discussing the importance of finding a trusted partner, Rabban said that after he found his CTO, who came onboard as an “almost” cofounder, he was able to move the business along much faster than he would’ve been able to as a solo entrepreneur. “You have someone to share ideas with and frustrations,” he said.

“As soon as I started working with him …  all of a sudden a big weight fell off of me. I had someone I could trust and someone I could talk to, and within a few months he joined the business” as the number-two employee.

Previous: The Most Optimistic Person You’ll Ever Meet (Four Lessons From a Career in Startups)
Next: Company Roundup: SHI, Synchronoss, Wayside Technology