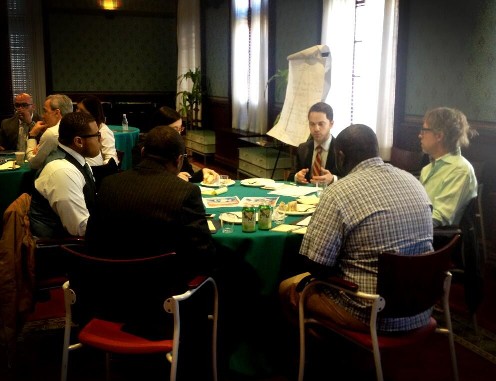 Mayor Cory Booker is demonstrating that he wants more modern, participatory government in Newark. With the help of Audible (Newark), he has initiated a competition to completely redesign the city’s website as part of National Day of Civic Hacking, June 1, 2013.

The prize: a $30,000 one-year implementation and maintenance contract. The contest will open virtually on June 1, 2013 and end on June 9, 2013, with a daylong event at Audible headquarters, at which celebrity judges will evaluate the submissions. Check this site on June 1 for full details, judging criteria and to register a team.

“Mayor Booker is extremely excited to have this kind of competition in Newark to help shape Newark for the long term,” said Seth Wainer, senior technology policy adviser to the Office of the Mayor. “This is just where the city of Newark wants to be, on the cutting edge of technology.”

Audible, which has been instrumental in encouraging the Newark tech community, is putting up much of the prize purse for the event. Brick City Development Corp. is a sponsor.

“This competition came about because the city was interested in redoing the website and incorporating some new ideas that are available in a modern website. We thought that instead of going through more traditional ways of putting out bids to typical vendors who serve municipalities, we might do something different.” Wainer told NJTechWeekly.com.

Newark had wanted to follow the lead of what the federal government and some other cities have done for app development, awarding prizes for the best app. The city thought a contest would be a great way to “harness Newark talent and bring attention to the fact that Newark is really an interesting city to be in and is on the cutting edge of some of these initiatives,” Wainer noted.

The city is looking for a brand-new approach to its website based on how cities can better gather and share information, something that will have some longevity, he explained.

“We want this to be a meeting place and a way for folks to get information about what is going on in the city and … the broader community around them,” Wainer said.

Wainer said Newark is looking for a 100 percent creative, sustainable, unique redesign. The contest is open to everyone, whether professional designers or “high school prodigies.” The city has been in conversation with Science Park High School, should young people there be interested in participating.

“We are looking for developers who run the gamut from talented folks who might not have their own businesses yet to much more experienced design houses who might look at winning this as a feather in their cap,” noted Wainer.

Newark plans to put up sample content based on its current website but hopes designers will think beyond this, Wainer said. One of the features the city wants in the new site is a way to allow Newark’s small businesses to gain greater exposure. “Potentially, our website could display activity that is going on around Newark that folks are just talking about on their own,” Wainer said, such as Twitter feeds.

Potential sites will be judged on aesthetics, security and scalability, and guest judges at the event will have domain expertise in these areas. One expert with a lot of experience in city websites will be joining the panel: Mr. Booker himself. “The mayor will be our chief user experience tester!” Wainer noted. The communications director for the city, James Allen, will help with the final selection.

All the contending websites will remain online through June so that other interested parties can weigh in on them and Newark can their incorporate feedback into its site.

The city decided to give developers a little more time than the typical hackathon allows in order to obtain a more complete product. Added Wainer, “We can give people time to work on their own, try something first and fail and then iterate. They can bring [a] better product to the event on the ninth. We were also happy to team up with the National Day of Civic Hacking on June first, the start of our event.”

“The response [to the idea of the contest] we’ve gotten in Newark and our broader New Jersey community has been really positive,” he said. Audible matched the City’s $15,000 initial prize, bringing the prize money to $30,000. The hashtag for the event is #HackNWK.