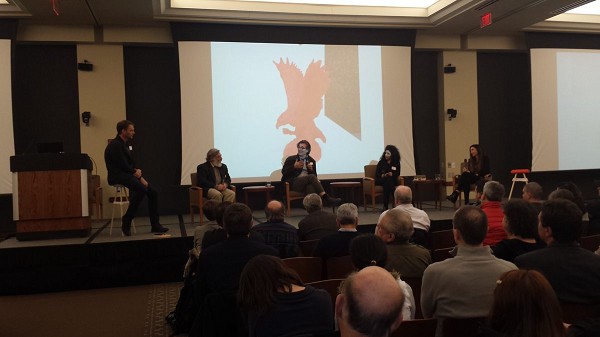 In the future, 3D printed versions of kidneys, livers and other organs made of human tissue will be used to replace failing organs, instead of today’s practice of harvesting body parts for surgical transplants. That’s only one of the predictions that were made at a presentation on Feb. 18 at Montclair State University on what lies ahead for the 3D printing industry.

Entrepreneurs involved in this disruptive technology spoke to a packed room at the Feliciano Center for Entrepreneurship, at Montclair State’s new Feliciano School of Business. They covered topics such as bio-print replacements and how the legal system will handle intellectual property issues when 3D printing goes mainstream.

The idea of printing body parts is hardly science fiction. For instance, two years ago surgeons in Wales used 3D-printed parts to successfully rebuild the face of a motorcyclist injured in an accident, and research is underway on bio-print replacements for organs that have been damaged by diseases such as cancer and arthritis.

“Half of the organs that you’ll need will be reproduced by 3D printing, with the exception of the brain,” said Ben Reytblat, founder and CEO of 3DMonstr, a Princeton Junction-based 3D printer manufacturer.

All of the speakers agreed that 3D printing, which uses various processes to create a three-dimensional object, will be used in virtually every aspect of our daily lives in the not-so-distant future. Along with its impact on medical science, this technology can be applied to food, transportation, education, construction, communications and even space exploration.

In fact, “everything you can think of will be affected by 3D printing,” said Reytblat.

Though 3D printing has been around for quite some time, this technology has lately been picking up steam, according to Michael Rees, an associate professor of sculpture and new media at William Patterson University (Wayne). “We need to open up to the fact of how big this is already,” he said.

And it’s getting bigger.

The current state of the 3D printing industry has been compared with that of the Internet back in the early ’90s, when it was a nascent technology that hadn’t yet achieved the huge commercial success it enjoys today.

Like the Internet’s early adopters, the ever-expanding 3D printing community still has much to learn about the technology. “We’re all growing with this technology together, and learning how to explore 3D printing,” said Natalie Rodriguez, a designer at MADLAB, a Montclair-based architectural and design firm

But a lot of work still needs to be done before this game-changing technology can produce a greater impact on the manufacturing process. For example, design improvements are badly needed in order for 3D printing to gain wider acceptance. “I think design is critical now and in the future,” said Reytblat. “Form is equally as important to humans as function.”

Despite its inevitable growing pains, the 3D printing industry is seen by its proponents as the next phase of how objects are manufactured, even as the advent of the third industrial revolution.

Mina Zarfsaz, an artist and designer who has an M.F.A. from Montclair State and teaches at Kean University, said that there’s a need to change perceptions of how 3D printing technology can be used to improve current manufacturing processes. “It is a necessity for a new way of thinking and making things,” she said.

Concerns about the costs of developing the technology were also expressed at the presentation. Rees criticized how some companies were shifting these costs onto users.

“It’s brilliant for the companies, but it’s frustrating for the [3D printing] community,” he said.

Another issue discussed at the presentation was the legal system’s position on thorny questions regarding intellectual property rights — such as patents, copyrights and trademarks — related to this technology.

There has been much debate about how the courts will apply these laws if individuals or groups start making 3D-printed items for personal use or for sale. Rodriguez said that there is a lot of concern about the ownership issue, but “there isn’t a solution at the moment.”

Before the presentation, nearly 300 people toured Montclair State’s MIX Lab, the first cloud-based 3D printing lab in the New York/New Jersey metropolitan area, and the ninth such center in the world.

The MIX — Making and Innovating for X (i.e., the unknown) — Lab is located at the Feliciano Center for Entrepreneurship, and includes 35 3D printers.

A group of students took the first course last year toward earning a Certificate in Entrepreneurship, Lean Manufacturing and 3D Design. They used the new technology to create a wide range of products and to work toward solving major global issues, including environmental and biomedical.

Montclair State is working with area businesses — conducting workshops, building partnerships and producing 3D-printed pieces. And it’s and developing programs with schools in the community.

“This is a lab where students come to solve problems,” said Dennis M. Bone, Director of the Feliciano Center for Entrepreneurship. “We have to come up with new ways to look at the world, to make changes, to come up with innovative ideas. That’s what innovation is all about.”

Previous: 3 N.J. towns to be among first to get super fast cell phone technology
Next: N.J satellite that fits in your hand headed to orbit