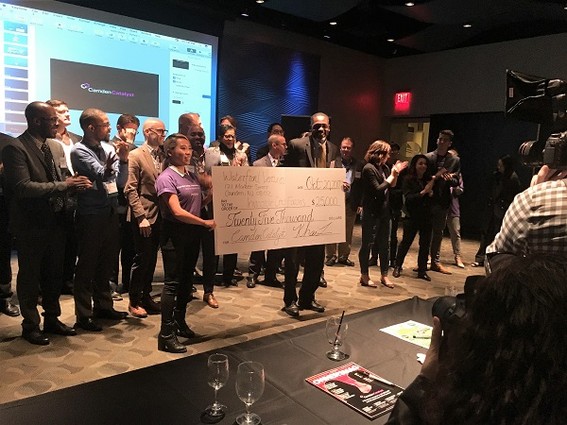 On Oct. 20, hundreds of Camden tech and entrepreneurial community supporters came to the New Jersey Adventure Aquarium to celebrate the startups that had made it to the final round of the Camden Catalyst competition.

The founders, who were competing for $25,000, were literally and figuratively surrounded by “sharks.” The winner was Fredric A. Byarm, for his startup Invincible City Farms (Camden), which aims to eliminate food deserts in Camden and elsewhere.

The significance of this day wasn’t lost on the speakers.

Khai Tran, founder of Waterfront Ventures (Camden), said, “This is the first time we’ve hosted anything like this.” Congressman Donald Norcross told the assembled, “If anyone had said five years ago that we would be sitting here in the aquarium at an entrepreneurial event picking someone who will come to Camden and change the dynamics, you would have said you were out of your mind. But we are!”

Camden County freeholder director Louis Cappelli Jr. said that the fact that people were actually competing to start and grow a business in Camden was something “phenomenal.” He added, “It’s a true reflection of the progress that has been made in this city over the past eight years.” Cappelli then spoke about multiple efforts to make Camden a safe city. “We have $3 billion in private investment taking place right now, as we speak. That could not have taken place if this weren’t a safe city.”

The competition was a two-part affair. We covered part one here. “We had 105 startups apply, 44 qualify … and, ultimately, today we had four finalists who made it to the final round,” said Tran.

Presenting first was Linked Noodle, a startup with Camden area roots that we’ve covered before. Katrina Naidas, the founder, introduced herself as a member of Waterfront Lab (Camden) who had gone to Rutgers University Camden. Her startup enables people who want to learn a skill to connect with those who can teach this skill. Potential students can “go to our site, type in ‘piano teacher,’ and it would provide a list of locals in your area.” Regarding the piano example, teachers whose grandmother taught them or who learned piano through other, unconventional means could offer their skills in the marketplace.

The second presenter, and the winner of the evening, was Byarm, of Invincible City Farms. Byarm grew up in the South Waterfront district of Camden with six sisters, became a chef and worked for many luxury resorts. He also had his own successful restaurant at the Jersey shore. Now he wants to concentrate on people who are making meals out of processed foods. “There are a lot of people in this nation that don’t get true nutrition, and yet they are asked to compete with people” who have access to it. “Why do we feed the most vulnerable in our society non-nutritious food?” he asked.

Invincible City Farms eliminates “food deserts. … We do this by a system that grows fresh organic fruits and vegetables here, inside the city. We distribute them through corner stores and bodegas that are already in the city,” said Byarm. “We use a lean process to make sure we are efficient and sustainable.” The company will install sensors so it can gauge the health of its crops growing in fields and greenhouses. And it will use a logistics system to provide efficient movement from farms to warehouses and retail outlets.

Denial Flow (Camden) is working on what founder Robert Rupp said is a “pretty big problem in the healthcare system, and that is denied claims.” Charges amounting to $3 trillion are billed [to insurance companies] every year within the hospital ecosystem, Rupp said, and as many as 10 percent of those claims are denied. This adds millions of dollars wasted in the healthcare system, and as many as 65 percent of these claims are never paid. Denial Flow is a Web-based platform that uses Microsoft tools to provide simple user interfaces such as drag-and-drop to give users access to powerful features, he said. Rupp admitted that his company is not the first in the “revenue cycle management software” area, but he hopes to focus first on ambulatory health practices.

Veniece Newton, founder and CEO of ENGAGEathon, whose website isn’t up yet, presented her software platform, which attracts, promotes, monitors and rewards community engagement, particularly student engagement. “We all like to be inspired, encouraged, empowered and engaged, and we have a population out here that needs our help. It’s our youth and it’s our future,” she told the judges. “We will provide tools to school districts, nonprofits and corporations to improve, promote, track, monitor and reward community engagement.”

The event’s main sponsor was AT&T, but also integral to the success of the event was serial tech entrepreneur Bob Moul, who founded #TEaCH, a nonprofit organization that advocates for K-12 tech education in Philly public schools and builds paths to employment in the digital economy.

According to a release, Moul understood Tran’s vision for Camden’s development after visiting Waterfront Ventures; coworking space Waterfront Lab; and Hopeworks ‘N Camden, a nonprofit that teaches technical and professional skills to at-risk youth. “I just got really inspired by everyone I met, especially the kids, so I said, ‘Let’s see what we can do with all this amazing energy,’” Moul explained.

Moul knew that Camden Catalyst was mainly about “launching a startup,” but he noted that it was “also about creating pathways to employment in the tech industry for the youth of Camden. … The guys at Waterfront Ventures were a natural partner, given their significant work in Camden.”

Dan Rhoton, executive director of Hopeworks ‘N Camden, shared Moul’s enthusiasm and saw how his organization’s involvement could benefit Camden’s youth. “Hopeworks is so excited to bring this initiative to Camden. Not only does the Catalyst bring energy and opportunity to Camden, but it also brings hope. We look forward to continuing to build Camden together!”

During the event, Tran referred to the continued support of the Philadelphia startup community. Philadelphia doesn’t see Camden as a rival city, he said, but as a place where tech startups can grow and contribute to the tech ecosystem in the area.