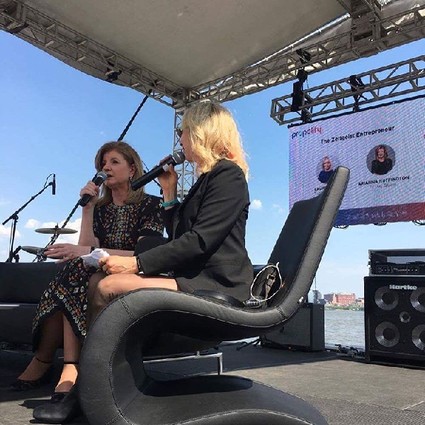 Arianna Huffington and Laura Touby at Propelify | Propelify via Instagram

We live in an age of addiction. To our phones. To being busy. Arianna Huffington aims to use our addictions to build her next mega-media/consulting/commerce company. To that end, she founded the six-month-old Thrive Global (New York).

The founder of The Huffington Post (recently renamed “HuffPost”) graced the Stage of Wisdom at the Propelify festival, on May 18 in Hoboken, where she was interviewed by entrepreneur-turned-investor Laurel Touby, who made her name and money by launching Mediabistro (New York) during the original dot.com era, then selling the company for $23 million in 2007.

“Stress is one of the biggest global epidemics,” Huffington said. “Our most precious resource is our time.”

Instead of “FOMO,” the fear of missing out, Huffington encouraged the attendees, who were baking in 90-plus degree heat, to practice “JOMO,” the joy of missing out.

Huffington aims to shift the corporate mindset by focusing on the scientific evidence showing that more sleep and things like meditation yield greater productivity and profit. One recent contribution the Thrive Global website came from Amazon founder Jeff Bezos, “Why Getting 8 Hours of Sleep a Night Is Good for Amazon Shareholders.”

Of course, this is easier said than done for the hyperactive Huffington, as she had two more appearances to make after her chat. The serial entrepreneur called this her “in the weeds” period because, as the founder of the new company, she must ensure that it reflects her vision.

In addition to providing content, Thrive Global is conducting corporate trainings at such places as Accenture (Florham Park).

Huffington said that her personal epiphany had come in 2007, when she collapsed from burnout and exhaustion, fell and hit her head, and then woke in a pool of blood.

“Being driven has to go hand-in-hand with taking care of yourself,” she said. “What do you do every day that is for your own well-being?”

Huffington led the audience through an exercise that focused on breathing, and noted that Thrive Global markets a “phone bed”charging station, which will remind users to recharge their phones outside their bedrooms each night.

Taking this idea one step further, Huffington made a request for free content: She invited everyone in the audience to practice turning off devices at a set time and keeping their phones out of their bedrooms at night, and then to write about it and email their stories directly to her at ah@thriveglobal.com.

While Touby alluded briefly to how Huffington had built a company on free blog content contributed by others, she pretty much let her off the hook.

Huffington, who sold her company to AOL in 2011 for $315 million, told the audience that she practices the principles of Rumi, who said, “Live life as though everything were rigged in your favor.”