Home » News » As Applications Roll In, What Would A Successful Newark Venture Partners Prove About The City’s Attractiveness For Startups? 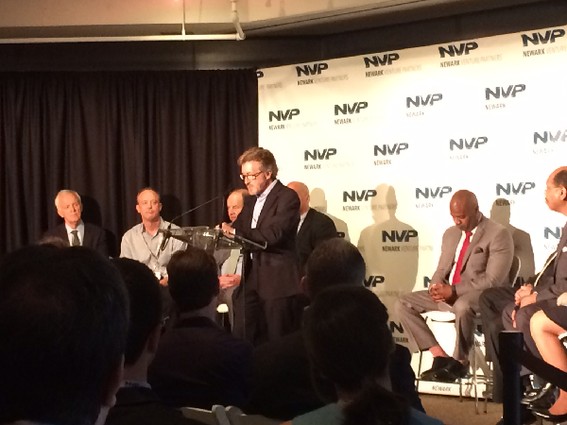 [This article by Andaiye Taylor was originally posted here, on Brick City Live.]

Earlier this summer, key stakeholders held a high-profile press conference to announce Newark Venture Partners (NVP), a $50 million social impact venture fund to be launched in Newark at One Washington Place, a few floors down from the headquarters of Audible, one of NVP’s marquee supporters.

Although fanfare quieted sharply in the days after July’s press conference, the announcement managed to generate lots of meaningful – if much quieter – activity and interest throughout the summer said Newark Venture Partners’ Director of Accelerator Operations, Dimitris Kouvaros.

“So far everything has been a go,” said Kouvaros. “We have a 25,000 square foot space that’s been built out. That’s going to be opening sometime in October,” adding that he was “super excited” to move the first cohort of startup firms into the space.

He added that applications have been rolling in steadily since the announcement — a trend Kouvaros expects to accelerate now that the bulk of summer is behind us.

“We’ve gotten well over 100 applicants with minimal marketing,” he said. “A lot of the folks have been New Jersey-based, but there’s also interest from New York and Boston, and there were even a couple [applicants] from San Francisco and the West Coast. I’m glad that Newark is attracting a good mix of everyone who sees the value in this opportunity.”

The startups that have applied have been mixed in terms of focus, and have included location-based hardware, social media platforms, and advertising technology companies, to name a few. The fund encourages a diversity of early-stage companies to apply, so long as they are technology-based and have a social impact component, Kouvaros said. Because of the broad base of sectors represented in the group of stakeholders partnering on the fund, there will be plenty of potential areas of collaboration with NVP’s partners for its resident entrepreneurs to take advantage of.

But perhaps what’s most exciting for Newark’s broader interests is what NVP might prove about the draw of Newark’s infrastructure for new business in general, and startups in particular.

It’s become common for cities and metropolitan areas to plan “tech corridors” and “tech hubs” — investments in space, education, and incentives for attracting and incubating technology companies as a way of both stimulating business and attracting and retaining talent. In this endeavor, Newark has something the vast majority of other cities don’t: a real competitive advantage in terms of endemic technical infrastructure.

“Don Katz said it on CNBC — we have the fastest internet in the world,” said Kouvaros.

That’s because of the surplus of unused fiber infrastructure located in Newark. That infrastructural wealth resulted from a collision of variables, most notably our location at the crossroads of the Northeast region, and a high concentration of utility companies located here that built an excess of fiber optic infrastructure to support their operations. It’s an advantage decades in the making — one that other cities simply can’t copy.

And Newark’s attractiveness for startup companies doesn’t end there. “We also have transportation proximity to a major media center, office rent prices are so much cheaper than New York, and it’s a college town,” Kouvaros said. “There’s so much to offer here.”

In addition to the pending announcement about which companies will comprise the first class of startups to join NVP, Kouvaros said the broader community can also look forward to engagement opportunities with the venture fund. He said he and his team will develop those ideas organically as the space opens up and firms start to fill it.

“I can see free events for the tech community and the broader community, and also General Assembly-style beginning and intermediate skills classes,” Kouvaros said, referring to the technology education company. “We’ll have to think more about exactly what we do once the space opens up. But yes, that is definitely in my pipeline to do.”