Home » News » Hack Jersey: Programmers and Journalists Work Together to Shine a Light on NJ 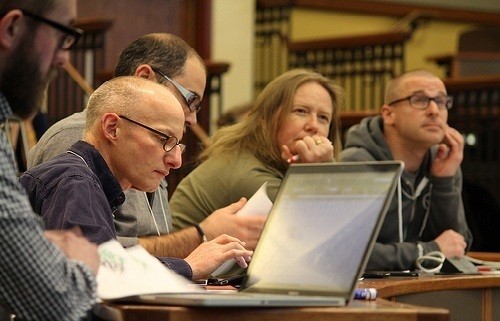 The judges listen to pitches at Hack Jersey. | Ryan Miller

Hack Jersey — which took place from Jan. 25 to Jan. 27, 2013, at Montclair State University — was a unique event to the N.J. tech scene and one that cemented Montclair State’s reputation as a cutting-edge institution at the intersection of journalism and digital information.

At this hackathon, journalists and programmers worked together on teams to develop code and scrape data from public files to further journalism in the state and shine a light on stories hidden from the public.

The overall winning team, for example, took N.J.-released traffic crash data, sorted it, tweaked it and came up with an open–code product that revealed the Garden State Parkway’s most dangerous stretches. The technique could well be applied to other state-controlled roads for which there is released data.

Another team looked at property values, tax revenue and other data for shore towns affected by Superstorm Sandy. The object: to understand how the towns’ financial health had been changed by the storm. Would their populations decrease? Would they need more or fewer services? Although this team didn’t finish the project during the weekend, it was able to demonstrate just how valuable these exercises can be. (See all the winning projects and their participants here.)

And that was the object of Hack Jersey: to use open-source code — code that can be used by others to develop their own stories — to create projects of journalistic value. It was an ambitious goal for a single weekend and an auspicious start to meeting the objectives set out by the NJ News Commons, which is a project of the School of Communication and Media at Montclair State University.

NJTechWeekly.com stopped by Hack Jersey several times during the event. We heard speeches, saw some proposed projects pitched and observed the teams hard at work defining their goals and trying to come up with manageable-sized stories. Journalists had to learn how to talk to programmers. Programmers had to listen hard to learn what journalists expected to achieve and sometimes had to modify reporters’ expectations. Although 70 participants started the journey, only 41 finished it.

At this hackathon, some teams were self-organizing but others were mashed together on the fly. Two journalists need a programmer? One programmer remains? That’s a team. And actually, that was the makeup of the team winning the overall prize mentioned above, with Brian Donohue — whose TechLaunch company, Echolocation (Brooklyn), recently graduated from that accelerator and received funding — joining up with journalists Noah Cohen (Teaneck Patch) and James Kleimann (Ridgewood Patch) to create CrashDataNJ.

Prior to the actual programming fest, participants received advice from people close to these kinds of efforts. Tom Meagher, now data editor at Digital First Media’s Project Thunderdome and a Hack Jersey organizer, discussed how he worked with newspapers and other publications throughout the state to help them build interactive web applications.

“This is an opportunity for these two crafts to come together to share ideas,” Meagher told the group. Journalists are very good at telling stories, he noted, and programmers are very good with systems and knowing how to get code and data to interact. “Together there is an amazing opportunity to build things better than we could do on our own,” he said.

Journalists, Meagher added, are far behind in using digital tools. “The only exception to that is what is called computer-assisted reporting,” he noted. Reporters with this specialty find public databases, analyze them, pull out the meaningful stories from the morass of data and publish a story in a paper or on a website. This type of reporting has evolved so that now, besides just drawing their own conclusions, journalists are putting the data online and letting people interact with it, he said.

A challenge for N.J. reporters is that much of the data they would want to use isn’t in the form of an application programming interface (API) or another easily accessible format but is locked in a PDF, Meagher noted. That makes it difficult to find and use the data.

For journalists the sweet spot, he said, would be finding projects that involve transparency in data, accountability, money and safety.

“You can never go wrong if the story comes back to ‘How is this costing you money?’ or ‘How is this endangering your family?’ ” said Meagher. He also provided the journalists practical advice from his many years’ experience, advising them not to tap programmers on the shoulder when they are “in the zone” and not to try to learn to code in a single weekend.

While Meagher presented an overview of what journalists and programmers could expect to achieve, Marc Pfeiffer, retired deputy director of the New Jersey Division of Local Government Services in the Department of Community Affairs, explained why it is so difficult to get good data from government.

Since the Hack Jersey participants were tasked with attempting to make their data accessible through visualization, Matthew Ericson, deputy graphics director at the New York Times, gave an overview of what the 30 people who work in his group there do.

(NJTechWeekly.com will have more on all of the speakers’ comments in upcoming articles.)

The Hack Jersey projects were judged by both tech and journalist luminaries, and many N.J. tech community members gave their time to help the teams. Aaron Price (NJ Tech Meetup) and Chris Ackermann (Facebook) judged, and Travis Kahn (TechLaunch) moderated the final pitches.

Besides the NJ News Commons, another premier sponsor was Knight-Mozilla OpenNews. Some of the biggest news organizations in the state were also event supporters.  (A complete list of judges and sponsors can be found here.)

Because Hack Jersey is a competition involving journalists, many media outlets have covered it. Rather than repeating what they had to say, NJTechWeekly.com offers links to event coverage, YouTube videos (the ones with high-production values were created by student volunteers), an extensive blog on the Hack Jersey website and a list of winners below.

On its website Hack Jersey states, “One of the many core missions of Hack Jersey is to create open source code that advances journalism in the state. To that end, all of our projects have hosted their source code on Github, and you can find it all here: github.com/HackJersey. Obviously, any code written in a 24-hour sprint will be far from complete, but it’s a great start.”

“I am an optimist. i try to see beauty in moments that may be really hard… We are at the beginning of the opportunity to make things really great if we work towards achieving it”

@hutchamachutch shares at the #Wisdom stage!

The Stage of Finspiration invites you to attend the #ExpertSession with Mulund Iyengar, director of the iStem program & teaching associate professor at @FollowStevens.