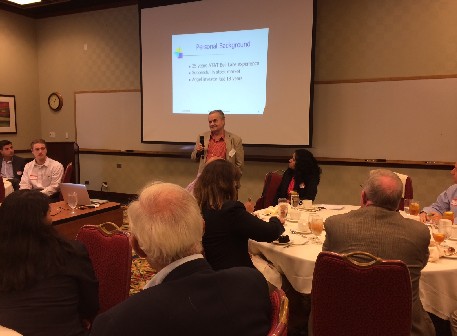 Before the discussion started, the audience heard a talk by John Ason, a prominent early-stage angel investor based in New Jersey who has had some excellent exits from local companies such as Diapers.com and LiveLook.

Ason spoke about the findings of a Columbia University study that placed VCs and angel investors into two categories, “foxes” and “hedgehogs.” Foxes were generalists, willing to take risks. Hedgehogs were investors who were vertical or industry-specific, and could do one thing extremely well.

The idea of the fox and hedgehog categories goes back to ancient Greece, where the poet Archilochus said, “The fox knows many things, but the hedgehog knows one big thing.” And it was popularized in 1953 by writer and philosopher Isaiah Berlin.

Ason said that these terms applied just as well to entrepreneurs. “Ones who create new markets or disrupt markets are foxes,” Ason said, and those who improve the functions of markets in which they specialize are hedgehogs.

Early-stage investors and micro VCs can be foxes. Micro VCs act like angels and do 50 to 60 deals a year, he said. Among the hedgehogs, according to Ason, you’ll find mostly angels, along with angel groups and companies that do follow-on financing in areas they know really well.

The Columbia study found that foxes get funded by foxes and hedgehogs get funded by hedgehogs. “There is very little crossover,” said Ason, who admonished his listeners that they’d “better target the right person from the beginning.”

If you are a fox, he said, any fox will do because we are all generalists. “If you are a hedgehog, you have to find someone in the angel world who knows your industry or your vertical.”

Series A VCs, who are hedgehogs, have decreased in number over the last several years by 50 or 60 percent, Ason noted. “One of the reasons is that it is easy to start a company and cheap to continue growing it.”

Moving on from the fox and hedgehog analogy, Ason said there really wasn’t a Series A crunch, just less demand for Series A money. Micro VCs, however, have a lot more money for very early-stage companies.

Ason also addressed the lack of female angels, saying that there are programs in New York that are now generating more of them.

He noted that one characteristic of the current investment scene is that U.S. companies are facing global competition, and U.S. startups are competing for angel attention with startups from across the globe. He mentioned that an investment conference he went to in Mexico City had attracted more than 8,000 people.

Another big change in the investment ecosystem: Angels participate in deals where they don’t necessarily know the other investors. That’s especially true for international deals.

Previous: Interview: Evan Koblentz Discusses His Book on The History of Portable Computing
Next: Sponsored Post: Is It SAFE to KISS? Should We KISS SAFEs Goodbye?