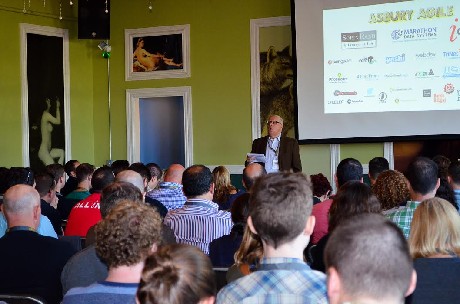 Sorin’s original firm, SorinRand, recently merged with McCarter & English, where he is now head of the Venture Capital and Early Stage and Emerging Companies practice. Here are some highlights from his talk:

“In order to build a company that will be financeable by third parties, you have to be solving a problem that the market thinks is really critical, and you have to solve that problem on a cost-efficient basis,” Sorin said.

He illustrated this point by drawing from his own legal experience. “I represented an iris-recognition technology company that thought it was going to be able to do away with fraud in financial transactions by using smart-camera technology to capture the image of the iris of your eye,” Sorin told the audience. He said that the technology worked and the concept was great, but “implementing their solution would cost more than the cost of the fraud in the financial industry sector.”

2. Decide what type of entity your company is going to be.

Sorin outlined the different forms a company could take. For instance, limited liability companies, or LLCs, allow entrepreneurs to preserve their personal assets while enjoying the benefits of pass-through taxation. This is when owners pay their business-revenue taxes on their individual tax returns.

However, Sorin added, most angel investors, venture capitalists and private equity funds do not invest in companies that are tax pass-throughs. That means that entrepreneurs looking for outside funding should form a corporation. “It isn’t to say that you can’t start as one and transition to the other, but you have to think that issue through,” he said.

Sorin also said that S corporations — closely held corporations that are taxed as pass-through entities — are another option for entrepreneurs. But there are a lot of restrictions concerning which companies can be classified as S corporations.

3. The team is critically important.

Sorin also encouraged entrepreneurs to think about whom they need to collaborate with, and whether they’d  prefer to have any employees at all or just rely on contract workers.

“If you’re going to employ people, you have a host of employment law concerns you have to deal with,” he said. In addition to wage and hour issues, business owners have to protect their business ideas from being stolen. This problem led to his next topic — intellectual property protection.

Intellectual property includes patents, trademarks, copyrights, license agreements and Software as a Service (SaaS) agreements, among other things. These arrangements may be designed to provide protection from employees, contract workers or customers, but decisions should be reached early.

5. Know how you’re going to fund your company.

Sorin suggested turning to friends and family for money, but encouraged his audience to understand the risks and complications involved. “It could be awfully uncomfortable sitting around a Thanksgiving dinner table with relatives who think they’re your business partners,” Sorin said.

He said that some entrepreneurs should turn to angel investors for funding — even if they’re running an LLC. “Some angels are very happy to invest in LLCs because they can benefit from having early tax losses” that they can use to offset other forms of income, Sorin explained.

Venture capitalists are another potential funding option. As Sorin explained, the number of early-stage venture capital funds in New York and New Jersey have “really proliferated” in the last five to 10 years.

He suggested that entrepreneurs turn to organizations like the New Jersey Economic Development Authority (EDA) or to his own law practice to find appropriate business partners who would not only “invest in the company, but also provide added value, “like helping entrepreneurs network with customers or other potential partners.”