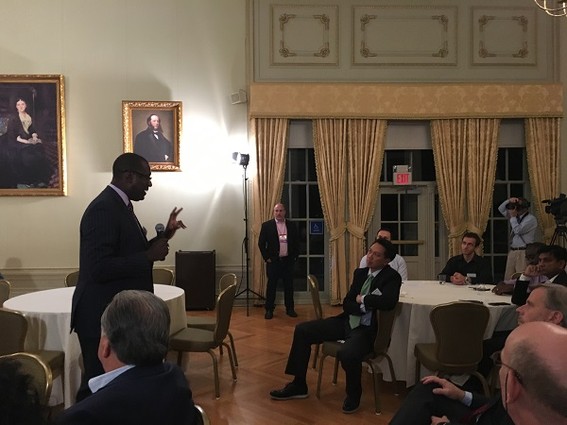 Frasier is currently entrepreneur in residence at Newark Venture Partners. Waddy is the head of Red Bank-based DIVERSANT, an IT-staffing firm offering a wide range of “IT staffing and diversity products, including IT staff augmentation, direct hire, and innovative diversity solutions.” (We’ll have Frasier’s story in a future article.)

The best part of being a successful entrepreneur, Waddy told the room, “is the ability to leverage the business as a platform to do good.” All of the things you achieve, he said, are built on the backs of your parents and grandparents, teachers and mentors, who came before you. “You have to pay that back.”

Waddy and his team at DIVERSANT mentor minority (and nonminority) business owners throughout the country, sharing experiences and best practices. Waddy is on the board of charter schools, and he counsels homeless folks to help them get back into the business world. The company also works with its Fortune 500 clients and federal government representatives to promote STEM education, diversity and job creation.

“That’s the secret of our success,” he told the group. “We try to give it away as fast as we make it.”

Waddy said that DIVERSANT is doing very well and that he plans to double the size of the business in the next five years; he also plans to expand into more industry verticals than he is serving now. “I’ll know it’s a great company when it runs without me,” he told the crowd.

Throughout his talk, Waddy was aware that there were some students in the audience. When you are in school, you think you have all the time in the world, he told them. But time is a “precious commodity in life, and if you squander it you can’t get it back.” He also advised students to keep going to events to broaden their horizons, and to get to know their professors and their administrators.

“Get to know other people,” he said.  “One of the great lessons I learned in college is the importance of diversity and being around different types of people. When I got into the work world, everybody didn’t look like me.” In his dorm at college, Waddy met someone from South Africa, another person from Manchester, England, and someone whose parents had a dry cleaning business in Brooklyn. Knowing these people was great preparation for the real world, he said.

Also, “My wealth resides in my network,” he noted. “My ability to pick up a phone and call someone is very important.”

He told the story of how his father, in particular, had pushed him to go to engineering school. His father, a wise person, was a blue collar worker who knew that engineers kept their hands clean and worked the nine-to-five shift. That’s what he wanted for his boy.

Before Waddy went to college, his father put an exclamation point on what life would be like if Waddy didn’t get that college degree. He got him an “internship” at 3M. However, the internship turned out to be a manual, repetitive night-shift job: getting the bubbles out of scotch tape before it was shipped. It was exhausting work.

His father said, “I know you are mad at me and you don’t understand, but if you think you can go to school and not work hard, and if you think you can come back here and sponge off your mother and me, we are sending you a signal. This [kind of job] is the best you can hope for.” At college, Waddy worked hard for his engineering degree.

Unfortunately, when he graduated, engineers were not in demand, and he had to pivot, working for a PC repair warehouse. After that, he worked for an IT recruiter for nine years before he was downsized. “That was the best thing that ever happened to me. I had had no thoughts of starting my own business,” but when they dismissed him, he was forced to rely on himself and take the time to figure out what he wanted to do.

He advised fellow entrepreneurs that when starting a new business, they should not to listen to negativity. “I started to surround myself with positive people who were already a success.” With tools like LinkedIn, you can literally connect with a CEO of a company and ask them for five minutes of advice, he noted.