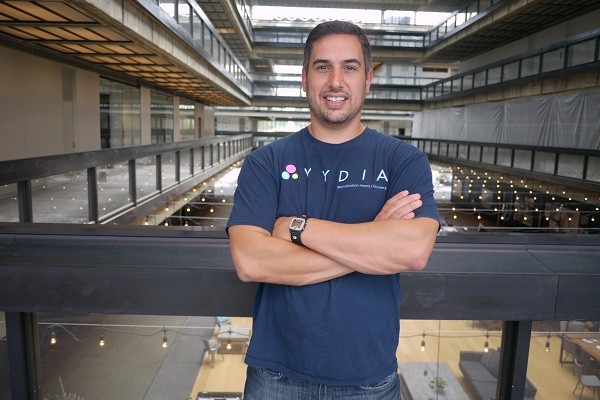 On October 4, Vydia, a New Jersey-based video monetization and distribution startup that had been based entirely in Holmdel at Bell Works, announced that it had received $1.15 million in funding, which was in addition to $750,000 previously acquired in convertible debt.

The round was led by New York-based Connected VC (via Jay Bhatti at Bell Works) with participation from Newark Venture Partners, Pasadena Angel Group and other strategic individual investors. As a result of this round, Joe Sparacio, former financial executive at IMAX, and Bhatti, cofounder of spock.com, will join Vydia’s board of directors.

NJTechWeekly.com has been following Vydia for several years, so we contacted Roy LaManna, cofounder and CEO, and asked him to drill down on what he believes he’ll be able to accomplish with the $1.1 million.

“Fifty percent of our users are using our product through responsive Web design on mobile devices,” he told us. “So we are putting a lot of time and resources in putting out native phone apps for iOS and Android. That will give them a better experience.”

In addition, Vydia users are based in 140 countries, with the majority outside the U.S. “We are just in English right now, so we are trying to expand our offerings in various different languages,” he said. “We also just hired multilingual customer service representatives” to better serve the international customers.

Vydia has been concentrating mainly on how people are using the product and what they like best about it. “Our focus is not on always giving users something new. It’s more on how can we make sure users are using everything and getting the most value out of the platform.”

Until recently, the company hadn’t focused on user growth at all, although it had experienced organic user growth, LaManna noted. “Instead, we focused on the amount of revenue per paying user, and KPIs [key performance indicators] to illustrate that the users were happy using the platform and were telling their friends about it.”

“We’ve grown 130 percent year-over-year recently,” La Manna said. For this reason, he anticipates needing more employees. “Our goal is to go to 50 employees in the next 12 months; then the goal is to scale up to 100 employees.”

Vydia is currently in the Vi Coworking Hub, at Bell Works, but, “We literally have people on top of each other,” so the startup is building out 7,500 square feet on the second floor. “We won’t be using the whole space,” only about 75 percent, so Vydia will be letting Vi use the rest because LaManna feels that what Vi is doing is important to the central New Jersey tech ecosystem. “We want to help them get people out of their home offices and into the coworking space.”

Now that it has funding, Vydia wants to expand its user base. The company was founded as a way to help music video creators monetize, promote and distribute their content, but it can be used for other purposes. The company boasts over 100,000 users, including Grammy Award-winning artists like Jimmy Buffett, Joss Stone and Def Leppard, as well as breakout discoveries like Andy Grammer, Fetty Wap and AJR.

“Right now, we are primarily within the music space, but video is a huge market. We plan to expand outside of music and go to video creators in general.”

Vydia also plans to enhance its marketing. LaManna characterizes the company’s market presence as “quasi-stealth mode, of sorts,” but the influx of funds will help Vydia market itself more effectively. In particular, LaManna says that SXSW [South by Southwest] is a great place to meet the Vydia user base.

“We will also be cosponsoring more events. We also launched a show on YouTube called ‘Vydia University’ and another called ‘Ask Vydia,’ which shows how video works and how to manage intellectual property rights on video.”

The company is part of BrandNewJ , a nonprofit member-based organization still in its formative stages that is working to foster collaboration among New Jersey tech companies so they can elevate each other. “We partnered with Brian Smiga [of Alpha Venture Partners and founder of TEDxNavesink] By & Large [Red Bank]; Chris Mulvaney, from CMDS [Colts Neck]; and Jay Bhatti, from Connected VC,” said LaManna.

“We are pooling our collective rolodexes and resources to help grow technology in New Jersey. What’s important about that is that New Jersey is a lot of small pockets of technology. … It’s all spread out. We have to work together, share resources, share our Rolodexes, share opportunities to work as a collective to build New Jersey, with the idea that rising waters raise all ships.”

This initiative has been influential in Vydia’s growth, LaManna noted. “Brian has been instrumental; Jay led the round.”

The startup is also bringing new hires from Manhattan to Newark through its relationship with Newark Venture Partners. Also, “Anyone we had hired previously from New York, we basically convinced them to do the reverse commute.” The idea is they will live in New York and work in New Jersey, which will also benefit the state, he said.

A company is all about the talent, he added. “We plan to put up posters for new hires at Seastreak and other commuter hubs, so if you live in New Jersey and work in technology in New York, you are probably going to hear from us.” And the startup is hiring at the junior level from the Rutgers Bootcamp.

“We are also partnering with the magnet school program at Freehold Borough High School, with the idea that we will be helping their vocational students have mentorships. They are teaching high school kids at Freehold Borough computer science, and getting them ready to go into some of the top schools.”

For example, Vydia worked with a girl who went to Freehold Borough High School’s Computer Science Academy, and is now attending Carnegie Melon. But, like every teenage kid, she was working at a retail shop. “We said she should work with us, and we’ll teach her.” She worked with Vydia for a summer and had a great experience, and now the program is being expanded.

Vydia is also working with many other local schools — for instance, as a participant in the mentorship program at Communications High School, in Wall. Moreover, the company is involved with Monmouth University (Long Branch), and has hired several alumni.