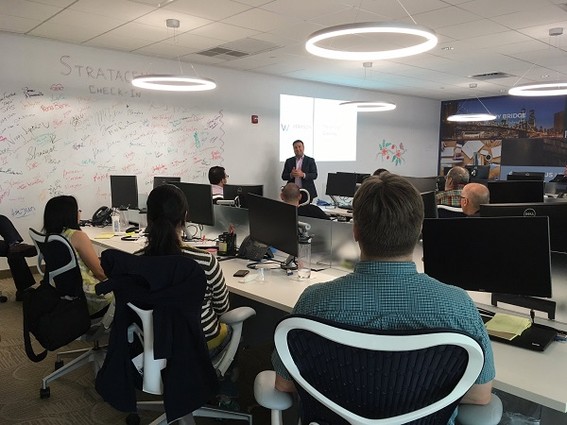 Online retailers received a better understanding of how to compete with mega e-commerce site Amazon at the Jersey City Tech Meetup in August. The meetup took place at the headquarters of Jersey City-based software company Stratacent with Jim Barrood, president and CEO of the New Jersey Tech Council, acting as the MC.

SuitableYou is aimed at young professional women who wish to build an inexpensive fashionable wardrobe with clothes for the daytime, evenings and weekends. Unlike other style box services, SuitableYou ships a minimum of two pieces, and every box helps to build a wardrobe, Brown said. The first shipment comes with five pieces. Customers have four days to try on the clothes and return them without shipping or restocking charges.

Customers start by taking a detailed style survey, and are then connected with an algorithm-based stylist portal. New shipments include pieces that go with previously shipped pieces. Customers build a “virtual closet,” which their stylist uses to comment on how to coordinate the pieces.

According to Brown, SuitableYou is geared to working and college women, while its competitors are not. The latter either ship high-end products or random, uncoordinated clothes.

Born of a personal need that was shared by friends, SuitableYou is a 100 percent family-funded business, Brown noted.  A soft launch took place in October 2016 to test shipping and fulfillment. There are now 170 members, with new members joining each week. The startup is planning to launch a private label, and is now seeking funds for expansion.

Brown noted that SuitableYou has a social component, making contributions to nonprofits such as STRIVE International (New York) and giving free workshops on how to dress.

Following Brown’s presentation, Kasbo spoke about what he called “the Amazon dilemma,” which many retailers face: while consumers enjoy the convenience of the Amazon platform, retailers worry about the effect of Amazon on their own brands. He described how Amazon is dominating the marketplace, and gave some hints on how to compete with the e-commerce behemoth.

Kasbo displayed slides from Visual Capitalist (Vancouver, Canada) showing that Amazon’s market share is larger than the shares of Walmart, Target, Sears and several other retailers combined. In addition, he said that Amazon has private labels and is entering a diverse range of industries, including healthcare.

He began by pointing out the reasons for Amazon’s success. For example, it’s easy for customers to deal with Amazon, the service and products are predictable, and the experience is reproducible.  Customers can reorder the same product, with the same ease, and know that it will be delivered.

Kasbo then explained Amazon’s philosophy. The company acts like a startup: aiming to win, but accepting of failure. When it does fail, Amazon steps back, rethinks and retries.  It’s willing to innovate and willing to lose. Kasbo noted that Amazon’s first attempt to sell videos was a failure. However, the company pulled back, rethought its position and retried with success.

How do other large brands differ from Amazon? he asked.  They don’t learn from others’ failures. Kasbo gave the example of the newspaper industry, which had the customers, but did not adapt to changing circumstances in order to keep those customers. Internal politics and silos in large corporations create a climate of fear, which is not conducive to change and adaptation, he noted.

Kasbo pointed out that anyone who is selling has to be on the Amazon platform and abide by Amazon’s rules. And he agreed with members of the audience that those with a niche market or who can somehow provide a personalized or customized service can compete, especially in the area of clothes, particularly high-end fashion.