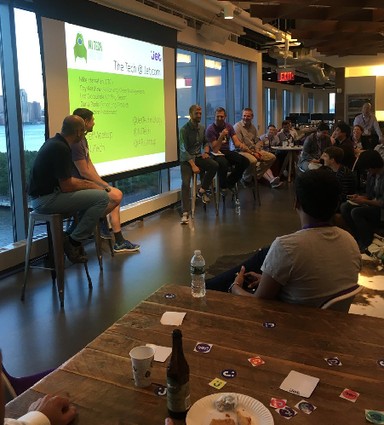 The program at the June NJ Tech Meetup included a Q & A discussion with leading technologists from Jet.com, the Hoboken e-commerce startup that is trying to take on Amazon.

The “fireside chat,” moderated by NJ Tech Meetup organizer Aaron Price, included Mike Hanrahan, cofounder and CTO of Jet.com; Lev Gorodinski, vice president of engineering, who is responsible for building and indexing Jet’s product catalog; Troy Kershaw, senior engineer, who is responsible for building the order-management system; and Dana Peele, a senior software engineer. Hanrahan, Gorodinski and Kershaw came from overseas to work at Jet: Hanrahan from Ireland, Gorodinski from Latvia and Kershaw from Australia. Peele is a New Jersey native.

Jet was started two years ago by Marc Lore, formerly of Quidsi (Jersey City), who had sold his startup to Amazon. Jet has another e-commerce site, Heyneedle.com (Omaha, Neb.), which is for home and garden products. Jet’s goal is to provide products to consumers at the least expensive price points. It also offers fast delivery — often in one day, two days max.

The startup’s engineers began writing the software behind Jet two years ago. The platform took 16 months to build and was launched in July 2015. The system was designed from the beginning to scale big. Now, in full production mode, the platform handles up to 300,000 searches per second. There are 10 times as many searches after a Jet ad appears on TV, and 20 times as many searches after the Super Bowl, panelists said. In addition, when the system is working to determine the best way to ship an order, it can calculate 100 million permutations.

The technologists said that one of the biggest problems facing e-commerce websites is the consolidation of product sources. Many e-commerce sites either sell their own products or a specific number of fixed brands. The catalog is typically curated in house, including the photography, design and production.

Jet, on the other hand, uses data feeds from vendors to create an online catalog. Jet employees never even see the product, the technologists revealed. This is very different from Amazon, where third-party vendors are constantly uploading items and pictures. The Jet engineers asserted that, while Amazon has hundreds of engineers reviewing products to normalize the catalog, they have just five guys.

Jet’s catalog is huge, with 12 million live products, an additional 40 million products that are not currently available (due to they’re being out of stock or other situations) and 300 million products in their knowledge base.

Other software engineering issues discussed by the panel included search relevance and confidence. A search should display the item that the customer wants in the first or second place, they said. To achieve the company’s two-day shipping goal, a product and fulfillment check is initiated within four hours of receipt of an order. And Jet’s “smart cart” feature bundled purchases.

Security is a big issue for Jet. Panelists noted that about two percent of the orders are fraudulent. Jet initially raised over $80 million in funding, then sought an additional $600 million in funding and is still seeking more investment. That money has also been a target for hackers, who spear phish Jet employees and try to buy Jet credentials on the Dark Web. Jet recently experienced downtime due to a payment-processing glitch. The company keeps live, evolving run books that document procedures on how to solve such problems.

Hanrahan discussed the reasons why Jet chose to use Microsoft Azure and F#. Azure’s ability to scale was at the top of the list. Microsoft’s offering of technical support in the form of sending engineers to Jet’s physical location if necessary was another factor. Also, the ability of Microsoft’s cloud to provide stateless machines was important. Stateless machines are more accurate, especially in a cloud environment, he said.

The team chose F#, Hanrahan said, because F# is a functional language, immutable and stateless, which is important for a cloud environment. Also, F# is easy to debug and easier to “reason with,” he said.  The decision to go with F# did raise the question of where to find F# programmers. However, Jet found a local community of F# enthusiasts to tap.

That Marc Lore is a New Jersey native was not the only reason for situating Jet in the state. Originally in Montclair, and now headquartered in Hoboken, Jet is in close proximity to (and an easy commute for) many talented engineers, programmers and other employees, the panelists said.

Price asked the panel how each one of them came to work for Jet, and how those looking to apply to Jet should go about it.

Kershaw responded with a story. He was a tech evangelist, and when preparing to do a podcast on F#, he asked to interview a Jet employee for the podcast. That was how he connected with Jet, and he was later offered a job. Kershaw added, “The resume alone doesn’t do it. You have to stand out. There is no artificial way to stand out.”

Previous: ToolMuse, GuidePal and FlexTraPower Pitch at New Jersey Tech Meetup
Next: Newark Pushes Initiatives to Teach its Citizens How to Program, Give Families Access to Tech

1743 More posts in News category
Recommended for you 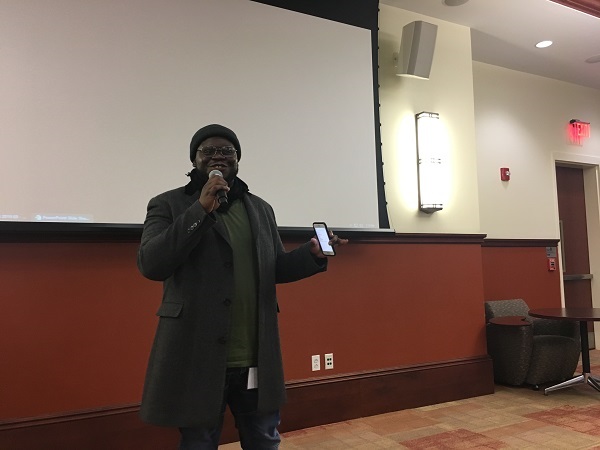 Four of the New NVP Labs Companies Come from New Jersey, with Two from Newark

So, who are the seven startups that form the NVP Labs accelerator class during the...

The Drones Were Ready for This Moment https://buff.ly/3bQt2es

Four of the New NVP Labs Companies Come from New Jersey, with Two from Newark https://buff.ly/2X1fRmL