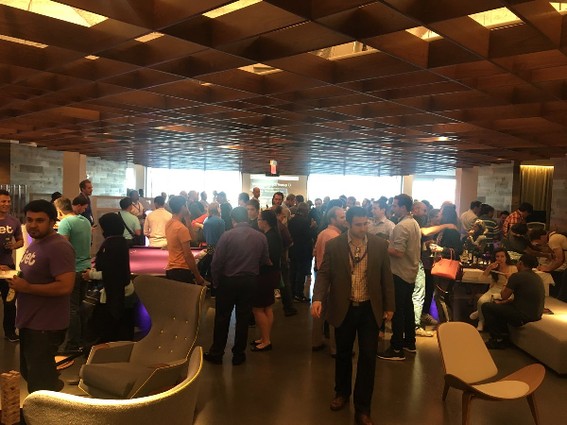 It was standing room only when the NJ Tech Meetup held its monthly meeting last week at Jet.com, in Hoboken. In keeping with the format of these meetings, three startups presented to an audience of several hundred people.

ToolMuse is a website that provides trusted content about tools and applications that entrepreneurs need and use, such as Slack and InVision, according to Thurlow. All the featured tools are rated and “up voted” by entrepreneurs who have registered at the site. Participating entrepreneurs can also make comments and give tips on how to use a tool to solve a particular problem; and they can respond to the question, “What is it good for?” When entrepreneurs stop using a particular tool, they can explain why and tell the other entrepreneurs on the site what replacement tool they selected.

ToolMuse uses LinkedIn for verification, so having a LinkedIn account is mandatory for establishing authenticity: Thurlow said that all businesses participating on the site are verified. Individual users have profiles that can be browsed. In addition, the site has a section for recommended books and podcasts that provide information on how to manage, grow or work at a startup.

The website is in beta and not yet monetized. It is and always will be crowdsourced, Thurlow said. She intends to monetize the site by providing data analytics to vendors and having vendors offer additional content, such as webinars. She noted that ToolMuse is a bootstrapped, single-founder startup.

Mattias Borg presented his website and app, GuidePal, which “connects explorers with destinations” in 170 countries. The website’s users include travelers as well as locals seeking restaurants and entertainment, he said.

Borg said that his goal was to provide trusted information, so the venues discussed on the site are not allowed to provide content. Instead, the content is provided by verified users such as local bloggers, photographers and journalists. Borg said that this approach increases the users’ confidence in the truthfulness of the content, which is especially important considering that the level of trust in crowdsourced content is generally low. GuidePal also solves the users’ problem of having to trawl through large amounts of data to find any content of interest.

Borg has been in the publishing and travel business for several years, and he recognized the need for such an online service. Travel magazines in Scandinavia have attempted to develop similar platforms, but without success, and Borg was able to take them over. GuidePal also sells its technology to other publishers, which presents no conflict of interest, Borg explained, because his startup has a technology platform that other publishers simply do not.

GuidePal is monetized through data analytics, advertisements and commissions on bookings. It started with $2 million in angel funding and is currently seeking more investors.

Linh Le presented his startup, FlexTraPower, which provides technology such as sensors and apps for smart clothing. The sensors are of Le’s own design, and are made of graphene, a very flexible nanomaterial that can be printed on cloth with an inkjet printer.

Le is a Ph.D. candidate in chemical engineering at Stevens Institute of Technology. He has obtained a patent on this technology, and has become affiliated with accelerators and incubators in New York. FlexTraPower is family funded.

As is the custom,  Eleanor Handley, of GK Training + Communications (Brooklyn, N.Y.), provided  feedback on the presentations. She said that the “great white whale of communications is confidence.” The audience agreed that you can look and sound confident without actually being confident, simply by standing tall and saying your message in a loud, clear voice. Use evenly space words and phrases, along with a resonant tone, she suggested.

“We should not be in presentation mode too much,” said Handley. Repetition can be boring, especially in speech, she noted, while variety is natural and can be matched with the emotion. If someone is panicking, we try to calm them with a soothing tone. When reacting to a dangerous situation, we automatically raise our voices and gesticulate.