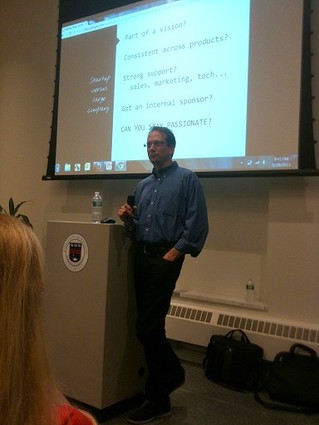 Jonathan Rochelle explained how his startup XL2Web came to be acquired by Google. | Esther Surden

Saying that he thinks it’s his responsibility to share the story about how XL2Web wound up at Google, N.J. resident Jonathan Rochelle — who is sometimes called the “father of Google Docs” —told how his little startup had become part of the search giant. Rochelle spoke at the Madison Tech Meetup at  Fairleigh Dickinson University on May 20, 2013.

The meeting attracted some 75 startup entrepreneurs, developers and others.

Rochelle put the group at ease by commenting, “I know what it’s like up at the podium giving a pitch. I’m so glad I’m not pitching right now, and I’m so glad I don’t have to wear a suit and can wear what I want to wear.”

Rochelle started out as a programmer at J.P. Morgan (New York) after graduating from the State University of New York at Albany. “I stayed at Morgan for 16 years,” he noted.

Rochelle said he had many ideas and created a lot of small startups part-time, but it wasn’t until he was ready to go out on his own that things began to happen. He began a consulting firm and a tech startup at the same time. Rochelle and his partner bootstrapped both companies and took a good idea that they had for a product and funded it themselves.

The idea for XL2Web started at J.P. Morgan, Rochelle said. “It was an idea that was meant to fill a tremendous hole that was developing in banking.” Bankers wanted to share complex financial models with their customers. When the Web came along, they could do that, but not easily.

“I had a team of programmers, and when they [the bankers] would come to us with an incredibly complex model for, say, Argentinian bonds or a credit and loan swap … [the bankers] would say, ‘I need it on the Web so my customers can try scenarios with this thing.’ ” It would sometimes take six months to get something they wanted developed on the Web. “It was very complex,” he stated.

Rochelle’s cofounder — Farzad “Fuzzy” Khosrowshahi — came up with the idea to convert those models to Web apps. The concept was “incredible in terms of usefulness and ROI [return on investment],” but the technology wasn’t ready. However, that idea was the foundation for the company XL2Web Technologies. Its tagline was “XL2Web in 60 seconds.”

Said Rochelle, “It was really enterprise software, but we knew we were on to something big when we talked to a trader back at J.P. Morgan and before he even knew the price of it, he said, ‘You just saved my job.’ ”

Trying to sell to the enterprise is no fun, Rochelle told the group. You often have to go through purchasing organizations, and you don’t get to talk directly to the customer. You speak to people who don’t know about the value propositions, he said. However, he and his partner kept trying.

The real reason his firm was bought by Google, Rochelle said, can be attributed to networking. “We created some contacts when we were at J.P. Morgan,” and one of them happened to be Adam Bosworth, the creator of Quattro, a spreadsheet application that later became part of WordPerfect. Bosworth was at BEA Systems (acquired by Oracle in 2008) when Rochelle knew him. He gave the team advice on architecture, telling Rochelle that though the idea was awesome, the architecture wasn’t.

“We called him back in 2004 and asked him to give us [additional] advice” on funding, the business model and the architecture. “We thought we had the right architecture now,” said Rochelle, but they wanted Bosworth’s opinion. Bosworth was no longer at BEA. He was now at Google.

“The message there is to keep those contacts,” Rochelle said.

Bosworth said it was OK for them to talk to him, but if they were there because they thought Google was interested, they should think again. Rochelle told him they were approaching him for advice only.

“We showed him a prototype that my partner in crime had developed just a couple of days before,” which was a simple front end built on a powerful back end. When Bosworth saw it, “he pulled the machine away from us and started typing an incredibly complex formula” that he obviously thought the software couldn’t handle. He was amazed that it worked.

“He said, ‘I changed my mind. Google is interested in this!’ He immediately went into sell mode and he started saying, ‘So, what do you guys think about the startup world? How do you like it? What’s your goal?’ ” Rochelle remembered.

Some six months later — in mid-2005 — the company was acquired, and XL2Web became Google Spreadsheets. When the product was released in Google’s experimental Labs setting, called Google Labs Spreadsheets, a lot of people hated it, Rochelle said.

“We had a good back end, but we had to build the front end, and that was not so easy.” Google then acquired a small Silicon Valley startup called Upstartle, which had created the program Writely, and it also became part of Google Docs.

Later, Google took the products out of Labs and became serious about making it a Web-based productivity app. “We were still very much under the radar,” Rochelle said, until, in 2007, the company launched Google Apps for Business, which “put us in a much different place.” That’s when demand for more features like presentations came along. “We acquired two two-person companies for the talent in the presentation space,” he noted.

The rest is history. Google Docs continues to evolve at Google, Rochelle said. Rochelle is project management director for collaborative Web products there.

A video of the presentation is available here.