Home » News » At NJ Tech Meetup, Lore Talks About Jet’s Value Proposition, Massive Market, and What Keeps Him Up at Night 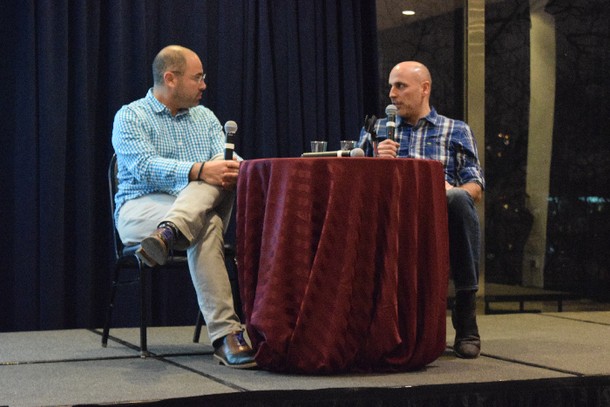 At the March 10 NJ Tech Meetup, Jet.com founder Marc Lore provided his rationale for raising $240 million for his e-commerce startup, which will soon be moving from Montclair to Hoboken.

In a “fireside chat” with meetup organizer Aaron Price, Lore said that he was trying to build a business that would achieve $1 billion in revenues in the first year.

Asked why he wanted to raise so much money, Lore answered, “The amount of capital is proportional to the size of the opportunity.” As with any startup, “we wanted to raise our seed round that would bridge us to our next round of financing. … Typically, you want to give yourselves 12 to 18 months to get to that next proof point, where there will be a much bigger step up in valuation and then a bigger round of financing. We are like any other startup in that respect.

“We raised the amount of money we think we need over the next 12 months. …It just happens to be a really large number because we are going after a massive market with a broad value proposition that appeals to nearly every American.”

That value proposition is to offer prices between 7 and 12 percent less than anywhere else on the Web. The company is following a Costco-meets-Amazon model: excellent prices and an unlimited assortment of products. All of Jet’s profits would be made from the $50 membership fees, with no profits coming from selling the merchandise.

Lore said that about $100 million of the $240 million Jet raised would be used just for marketing, to build public awareness of Jet.

When Price asked him about spending $100 million to acquire users, Lore said that “the key is to have a really solid model on the unit economics of the business.” An entrepreneur needs to prove to investors that the cost of acquiring a customer will be a small enough fraction of the expected lifetime profit from that customer to make the risk worthwhile.

In response to another question, Lore said he didn’t think that Jet was in danger of being quashed by Amazon, which would have to lower its prices to compete with the new e-commerce company.

“This is the great thing about being a startup,” and beginning with a clean slate, he said. “You have this honeymoon period where you don’t have any customers you are subsidizing, but you are able to carry an ‘at-scale value prop’” at a low cost that incumbents in the market can’t touch. For Amazon, it would cost an estimated $12.5 billion a year to match Jet pricing, he said, something that wouldn’t make sense for Amazon to do.

Lore admitted that his e-commerce site does not use the Lean model. “I’m just a big believer that when you start a startup, you have to represent it at the scale value proposition on the day you launch. For some businesses it doesn’t cost that much to represent it at scale.” However, for Jet, where the business proposition is to “sell anything online at crazy prices, that just requires tens of thousands of hours of programming to do everything,” he said. “To get to that value proposition on day one (launch day) requires a ton of money. And then to carry it over the next twelve months requires a lot of capital. It’s a capital-intensive business.”

He advised other startups to follow his lead, based on the lessons he learned from his first startup, The Pit. “If you want a startup to succeed, manufacture the startup proposition from day one … manufacture it so that the customers love it, and you’ll never have a better value proposition,” he said.

Lore said that he had heard from a lot of entrepreneurs who showed him their models. “And I ask, ‘Is this the best the customer is ever going to get?’ They say, ‘No, of course not. I just can’t afford it.’” Lore then tells them, “If you are in the startup game, you can afford it. You just have to convince investors to give you the money. That’s the game.”

Lore said that at Quidsi, which was acquired by Amazon, he learned the importance of building the right culture from the beginning. In the beginning, he would bring people on board just because of their résumés. But then he discovered that companies need to come up with a core set of values from the beginning, and to figure out who they are. “If you think about that too late, you get into situations with people pulling in opposite directions.”

Finally, Price asked Lore what keeps him up at night. “Execution keeps me up, knowing that when we launch there are really high expectations,” Lore answered. “We are not the typical startup. When we launch, there will be upwards of a million people checking out the site. We are not going to have the opportunity to disappoint people. So, coming out of the gate we need [satisfaction] scores of 9 or 10 from everyone who shops. A lot of startups have two or three years to work out the kinks.”

Some people are already shopping on the site, and Jet is working out the bugs in its software and trying to solve the problems that have arisen so far. However, “we are going to launch in a couple of months, so it doesn’t give us much time to work everything out and try to get to a billion dollars in revenue in 12 months.”