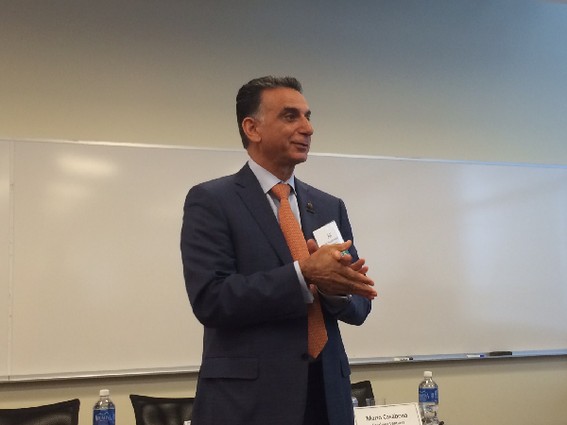 At a New Jersey Tech Council meeting on April 14, Dr. Ali A. Houshmand, president of Rowan University (Glassboro), joked that every time he saw people from what he called the “real world,” it pleased him.

That’s because the challenges facing higher education in this country require more interaction with people outside academia, especially those in the tech industry, he told the audience at the meeting, called “Growing the Technology Economy in New Jersey.” The event, part of New Jersey Technology & Entrepreneurship Network Industry Week, also included a panel discussion on the topic.

Houshmand sees higher education today as broken, and believes that restructuring it will require public–private partnerships on a scale, and of a kind, that has never been tried before.

“I really believe that it’s absolutely essential for the people from the real world … to get involved, not only in collaborative ventures after we have educated the students, but right at the beginning, in the areas of curriculum development and curriculum delivery. We should set up a farm system [as in baseball]. Recruit the students in the areas you need, and we will educate them to meet your needs when they become your employees. This, to me, should be the future of our education.

“Instead of industry hiring R&D people and spending tons of money to do research, and colleges hiring research faculty and paying them money to do research that ends up being papers and dissertations, how about hiring people that are on two payrolls? How about hiring a person that can do your R&D, your proprietary research, but at the same time can be a teacher?” he asked.

Houshmand said that industry could sponsor schools such as — and this is a fictional example — the “AT&T School of Information Technology” at Rowan University. “I believe that should be the new way of educating people because if you do it, you will do it efficiently, you will do it right-sized.

“If you look at how higher education is operating in this country, really not much has happened since the agrarian age,” he told the group. The structure is still based on the semester system, books are expensive, and faculty members lecture “like the sage on the stage.”

Students are expected to be productive once they graduate, “except that’s not what actually happens,” he said. Industry still has to invest a substantial amount of resources to train their new recruits. Companies have told Houshmand that the engineers coming out of college are not ready for the real world, and that it takes four or five years before they are really productive.

There is a huge disconnect between higher education and the real world, he said. “Higher education is producing too many graduates that are not ready, or they are not fit, for the areas where there are needs, and not enough people for the areas where there is need.” This problem is especially acute in the area of technology, he said. Everyone is looking for specific talents. Rowan University is looking for specific talents as well, he said. But tech companies and others have to import people with H1B visas to work in certain specialties.

Houshmand also believes that universities need to be more efficient. They have become like little self-contained towns or cities. Rowan University, for example serves all the meals, generates the electricity, cuts the grass, repairs the cars, and does all the building maintenance on campus — you name it, they do it. “Yet our core mission is education,  to create knowledge and impart knowledge. We do everything else. …We should not be in the business of repairing cars or managing a fleet of 150 cars.” The university is doing all that at a massive cost.

“Every activity that is not part of the core mission should be done by people from the real world,” said Houshmand. “They’ll do it more efficiently, better, and it will create jobs and spur economic development,” he added.

Previous: At TEDx Navesink, Audible’s Katz Talks about Newark, Reveals Planned Accelerator and Venture Fund
Next: At NJ Tech Meetup, Lore Talks About Jet’s Value Proposition, Massive Market, and What Keeps Him Up at Night