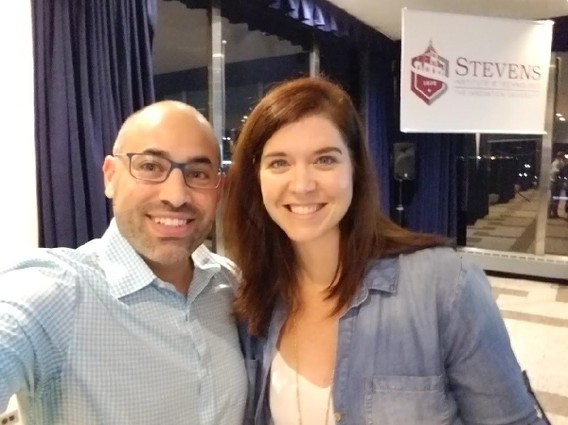 Christina Wallace, guest of honor at the NJ Tech Meetup on August 10, has quite a robust resume, which made for a lively, fast-paced fireside conversation with meetup host Aaron Price. Here is just a sampling of her accomplishments.

An opening anecdote about her first job as a newly minted graduate from Emory University went a long way toward educating the attendees about Wallace’s passionate drive and ambition.

Many would characterize a position at the famed Met Opera as a dream opportunity, especially for a young person fresh out of college. Wallace was so determined about making procedural improvements — which had apparently come across during the interviewing process — that she was cautioned before commencing her first day on the job that the strict terms of her employment included keeping quiet about any changes … at least during the first year.

For a beloved world-famous arts institution founded back in 1880, who was she to walk through their doors and tell them how to run their organization?

So, although she dutifully agreed to toe the line and keep quiet, Wallace was independently assembling a list of changes she sincerely believed would help The Met once she was permitted to share it.

Unfortunately, when she attempted to bring her proposed changes to light, the reaction of her superiors higher up the food chain was, unsurprisingly, further stonewalling. Undaunted, she opted at that point for a change of scenery, enrolling in Harvard’s prestigious MBA program.

Her candid thoughts about a completed Ivy League master’s degree led to an interesting revelation: “An MBA skill set is not necessarily the right background for building business growth,” she said, adding, “Successful growing businesses need the right combination of entrepreneurship and venture capital. Additionally, most founding entrepreneurs depart after their earn-out period, if not before.”

Following B-school, Wallace faced a very difficult economy, given the financial crisis, which made Wall Street seem like an unlikely option at that point. Unfazed and anxious to pivot, she and another young woman tried their hand at raising a round of venture capital. The main pain point they intended to solve was helping tall women (like themselves) find an assortment of attractive outfits that were available for purchase off-the-rack.

Although she and her partner successfully raised a $1 million VC investment for their company, Quincy Apparel, Wallace learned several valuable lessons along the way that she was happy to share with the meetup audience. First, success in the clothing industry is often tied to well-run inventory management. The startup’s initial war chest seemed like a sufficient level of capital for undertaking such an endeavor, but the company ultimately carried too many SKUs, which caused it to run out of money as a result of having too much unsold merchandise.

She noted another valuable lesson learned: ensuring that you have complementary, nonoverlapping skills with your cofounder. As it turned out this was not the case. Also, neither possessed the requisite fashion design, supply chain or management abilities to make their business a long-term success.

In retrospect, the founders also accepted money from the wrong VC fund, a firm which did not share their goals. Unfortunately, it had been their only offer on the table so options were limited.

The investors insisted on delivering their checks in tranches, linking the timing of the capital allocations to the team’s hitting certain sales milestones. This ultimately helped doom the business due to inventory challenges that tied up too much of their overall capital.

Looking back with mixed feelings about this experience, Wallace said that she believes the right decision would have been to start the business on the side, while maintaining a day job generating sufficient income, and perhaps self-funding the apparel company. In the end, she vowed to never again enter the fashion space.

Today, Wallace says she is very happy with her current career, which she indicated does not feel like work to her, even though she typically clocks in at seven-day work weeks. At the end of the year, she will have a number of different 1099s to report on her taxes, which come from an array of “side hustles,” as she calls them.

Her advice to employers was to embrace job candidates with multiple skills, and to avoid “siloing” them, as they could contribute on various fronts to the well-being of a successful organization.

As often happens at NJ Tech Meetup events, the fireside chat concluded with Price asking the featured speaker how the audience members could be of assistance. Wallace’s response was that, although she couldn’t think of any ways in which the attendees could help her individually, her honest hope was that people would “find someone who doesn’t look like you, or remind you of yourself, and help them.”