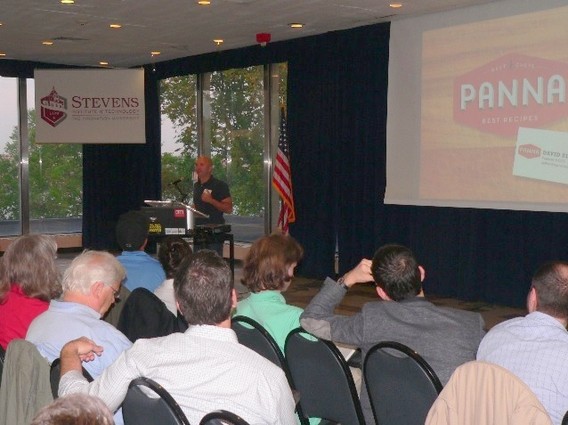 David Ellner of Panna spoke about his cooking video magazine startup at the NJ Tech Meetup in May. | Courtesy of Victor Olex, founder SlashDB

Three very different startups presented at NJ Tech Meetup on May 15, 2013. One pitched a mouthwatering, subscription-based, how-to-cook video magazine app, the second an innovative e-commerce site and the third an app for professional DJs.

As always, the meeting took place on the beautiful Stevens Institute of Technology Hoboken campus and featured networking to spark connections and inspire ideas.

NJ Tech Meetup gatherings are regularly attended by at least 160 tech developers, startup entrepreneurs, investors, consultants and other friends of the N.J. tech community. The group has nearly 3,000 members.

After the meeting convened and participants were given the opportunity to ask for help from other audience members (in finding a developer, a technical cofounder, a marketer, specialists and website testers), three startups pitched.

First up, and the winner of the Audience Choice award for the evening, was David Ellner, CEO and founder of Hoboken-based Panna, who was substituting for a presenter who became ill. “Panna is a New Jersey company and we will always be in New Jersey, and I’m proud of that,” he told the audience. Ellner and his employees are based at the coworking space Mission Fifty (Hoboken), which he said is a great place to work.

Ellner started Panna to solve a personal pain point — he likes to cook at home using cookbooks by famous chefs, but “I found myself consistently wondering if I am doing this right,” he said. When the iPad came out, it was clear to Ellner that there was an opportunity to present recipes along with video to transform how cooks follow recipes. “I left my job, followed my passion and not one day has felt like work,” he told the group.

Launched in November 2012, Panna is an iOS-based cooking video magazine app featuring well-known chefs. It offers a unique experience to support users while they cook. Because it is difficult to prepare food and watch a video at the same time, Ellner said, his videos provide a deep dive so users can see the texture of a sauce or the exact angle of a knife cut, for example. The company has signed a number of acclaimed and master chefs to create the videos.

There are 13 recipes in each of the six issues published per year. Cooks can buy a single issue ($5) or a subscription ($15 a year), Ellner said.

Apple had picked the iPad version of the launch as an editor’s choice, which created some buzz for the app in the store. In addition, when the iPhone app launched in December 2012, Apple chose to feature it, Ellner said. The app has also appeared on a number of top 10 lists. It has had more than a half million downloads, Ellner told the NJ Tech Meetup crowd.

Ellner said he closed a Series A round for the app in early May after having bootstrapped the business, raised funds from friends and family and launched a Kickstarter campaign. NJTechWeekly.com later learned that the $1.35 million round was led by Anthem Ventures. Other investors include Lerer Ventures, Crosslink Ventures, Howard Schultz’s Maveron and Shari Redstone’s Advancit Capital, according to Peter Kafka in AllThingsD.com.

Next up at the podium was N.Y.-based Howndog founder and Warren, N.J. native Benjamin Zimmerman, a Founder Institute graduate. His website, which marries how-to with e-commerce, will feature user-submitted how-to videos curated by a community of experts, then allow users to purchase the products used in the videos.

To illustrate the value of his site, Zimmerman contrasted it with the example of a Web video that teaches viewers about fishing. “Most of the people who watch a how-to video on fishing want to look like the guys in the video,” he told the group. “If all you are offering is a how-to video, you are convincing a viewer they need a fishing pole without giving them the capability to purchase it,” he said. You are leaving value on the table, he asserted.

As NJTechWeekly.com was preparing this story in June 2013, we reached out to Zimmerman, who told us via email that he had pretty much shut down the Howndog operation. “Google launched a YouTube service that closely resembled what I was trying to put together,” he said. As a result, he “figured it was best to stay out of their way and move on to the next project.”

The final presenter of the evening was Hungarian entrepreneur Gábor Szántó, who had come to N.J. two weeks earlier to determine how to bring Hungarian companies to the area because “going global starts here,” he said.

Szántó is CTO of Imect, the maker of the app DJ Player, which is designed for professional DJs. “Four years ago I decided to bring the professional DJ experience to mobile devices,” he said. The app store was full of toylike DJ apps, but nothing out there was for the DJs who work at bars, private parties and other venues.

“We developed a unique core technology that delivers desktop performance on a mobile device,” Szántó told the group. The app can be used on any ARM-based device. Its tech doesn’t drain the handheld device’s battery, he said. DJ Player has had 160,000 downloads so far, he noted, so it is quite strong in the DJ business.

Szántó said the core technology can accelerate both audio and image processing and be used for voice recognition.

Previous: The Week that Was! Dennis Bone, Vidyo, Three Meetups, and TEDxHoboken
Next: Digital Billboards: Growing interest around NJ in 8-second ads