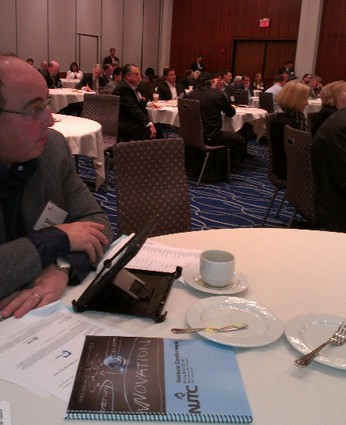 *ARCHIVED POST–This week we are reposting some of our best received posts in 2013. This post was first published in March, 2013.

New Jersey companies took home roughly half the awards presented at the conference, which drew participants from as far as California. Angels and VC investors who attended last year told NJTechWeekly.com this year’s event had better energy even with the smaller setting at its new location in the Hyatt Regency.

Some were repeat winners.

Most innovative product/service company winner was ProServices of Trenton, N.J., a company which has been in business for more than 15 years, is profitable and offers independent software security and quality assessment services to Fortune 1000 companies and the Federal government.

HATCHEDit of Westfield, one of two winners with women at the helm, took best early stage company honors for its social network for the future that streamlines personal communication for creating shared calendars and making plans with your inner circle.

Company Most Likely to Have an IPO was Pervasive Group of Clifton, which has developed MMGuardian for parents to control their kids’ texting and smart device use remotely. The app has had 53,000 downloads since January. Echolocation, which came out of the TechLaunch (Montclair) accelerator along with Pervasive, was Judges Choice.

Wrapping up the awards presentations as a 2012 success story was Lyndhurst-based SpeechTrans, which offers a universal language translator. The company was last year’s people’s choice and also voted company most likely to succeed.

Co-founder Yan Auerbach said the company has partnered with HP and as of April 20 its translator will be installed as an API in every HP product shipping with Windows 8.

Auerbach’s advice: Be patient and persistent at achieving your goals and while publicity is nice, your ultimate goal should be revenue.