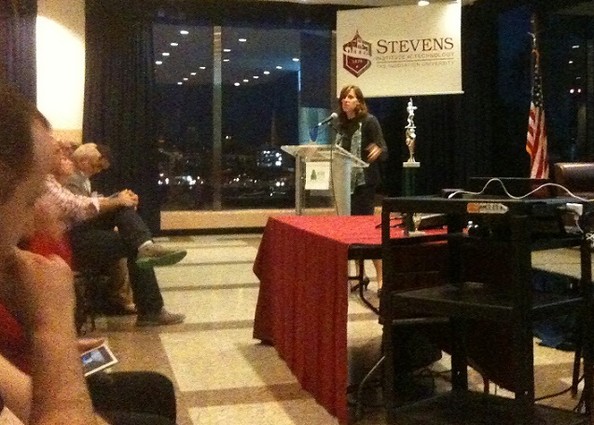 Mayor Zimmer backed a grassroots effort by members of the New Jersey Tech Meetup to develop a mesh network to keep communications up and running during natural disasters like Sandy. | Esther Surden

“We want to be your laboratory,” Hoboken Mayor Dawn Zimmer told the NJ Tech Meetup (NJTM) on Sept. 16, 2013. She meant that Hoboken — which had been ravaged by Superstorm Sandy — is open to piloting new tech initiatives to make itself more livable and better able to withstand natural disasters.

NJTM takes place once a month on the beautiful Stevens Institute of Technology (Hoboken) campus. The group, whose motto is “Sparking connections; inspiring ideas,” is a place for tech startup founders, developers and those serving these groups to mingle and network.

Each meeting includes several startup presentations and a speaker or panel discussion. Occasionally a political figure addresses the group, which regularly draws nearly 200 people and numbers more than 3,100 members.

Mayor Zimmer, a fairly frequent attendee, has supported ideas first brought to her through the meetup. One example: after Zimmer attended the July 2012, meetup and watched a presentation by Social Bicycles (New York), Hoboken agreed to host a pilot bike-sharing program.

“I am proud to say we had a very successful pilot program that we started at the beginning of the summer that has been extremely successful, and that program will be going citywide next year,” she said at the September meetup.

Zimmer also threw her weight behind MileMesh, an initiative begun by some meetup group members in reaction to the lack of communication during Sandy.

When implemented, it is expected to help Hoboken residents shelter in place using an Internet communication system that functions during emergencies.

Matthew Wade, the CEO of Gameplan who helped assemble the MileMesh team, put it this way:  “MileMesh is a grassroots effort, built by the people, funded by the people, for the people.  And this is why it is resonating so strongly and the reason why it will ultimately be successful, not only here in Hoboken but when replicated in municipalities both domestic and international.”

On Wade’s LinkedIn page, he said: “In the week after Hurricane Sandy we all experienced hardship and leaned on each other for help. FEMA, PSE&G and other institutions eventually reached the city to restore basic services. But our telecommunications companies were overwhelmed and unable to respond effectively in the face of unprecedented infrastructure failures. As a result, Hoboken residents and businesses had a very difficult time communicating with each other, with our local government, and with friends and family outside our community.

“MileMesh will prevent Hoboken from going off the grid like this again. We aren’t waiting for Verizon or Cablevision to harden their systems. Despite repeated calls from Congress and the Federal Communications Commission, the telecommunications industry is resisting new requirements for backup power for cell sites and other critical communications facilities. Because of this, my team is focused on solving this problem ourselves so that our community is prepared for the next big crisis.”

According to Townsend, who presented the MileMesh project to the meetup attendees, “Basically what we are doing is taking a new generation of wireless technology, cheap, powerful routers and radios, open-source mesh networking software, to cover the city in a cloud of free wireless Internet.”

Townsend described mesh networking as a “bucket brigade” that will route the packets from radio to radio until it finds one with a wired connection to the Internet. Mesh networks can be built quickly over a large area, he said.

“We want to put big pieces of this on solar power so even if there is an extended power outage in Hoboken … it will still stay up,” said Townsend.

This is citizen- and community-driven, he added. It’s not about asking Verizon or AT&T to come in and fix the problem. “To host a node, the equipment is less than $100, and we are asking people to participate. What is needed are community members with a good view out their window, people with access to a rooftop and permission to put equipment there or people who overlook a public space like a park or the waterfront.

“As we get more pieces of this mesh system up and more people participating, the radios will autodetect each other” and the real magic will begin to happen. “You’ll be able to buy a radio, put it in your window and be connected to the Internet,”  Townsend said.

Zimmer replied that Hoboken is “more than willing to tie this in to the upgrade in generators” that the city is implementing. “We also have a partnership with the BPU [Board of Public Utilities], PSE&G and the Department of Energy, working on a microgrid system. I think the MileMesh program could also tie in to that,” she said.

Zimmer said Hoboken is partnering with the developers to make MileMesh part of an application to the Rockefeller Foundation 100 Resilient Cities Centennial Challenge.

Besides looking for volunteers to place the radios in strategic locations, the MileMesh team is seeking those who want to help it build out the system. “Then you can learn about mesh technology and community network organizing and take it back to your town. We see this as something that can spread throughout the region, with municipalities becoming each other’s backups,” said Townsend.