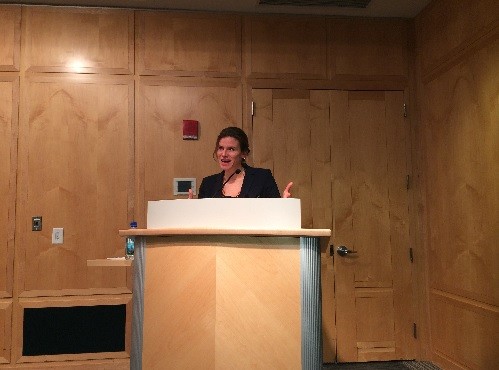 More than 100 Princeton Tech Meetup members and an equal number from the greater Princeton community listened to a fascinating talk by economist Mariana Mazzucato on Dec. 30, 2013.

That talk, entitled “The Entrepreneurial State: Debunking Public vs. Private Myths in Risk and Innovation,” was based on Mazzucato’s book with a similar title.

Princeton Tech Meetup is the state’s second-largest tech meetup group,  with more than 2,100 members. The group gathers monthly at the Princeton Public Library, in the heart of town.

Mazzucato, who was named by the New Republic as one of the “most important thinkers about innovation you need to know,” said her talk was meant to be provocative, and it was.

A compelling speaker, Mazzucato lobbied for the idea that government funding is an appropriate way to spur innovation. She stated that most industries now fueling the economy had been built through government financing or policy in one way or another.

And, Mazzucato said, while Silicon Valley VCs and innovators are very smart, they essentially surfed a “wave” of publicly funded money.

“We have to change the story, the way the narrative is related,” Mazzucato told the group. If the state continues to reduce funding based on the idea that innovation only happens when the state gets out of private sector’s way, she said, there will be few waves for future generations to surf.

“Tesla Motors received a $500,000 guaranteed loan from Obama’s administration, the same amount Solyndra received,” Mazzucato pointed out. Tesla is a darling of Silicon Valley, and Solyndra failed. The Obama Administration was told to get out of the business of picking winners. That’s the wrong way to view this, she said, adding that the state must be willing to take these kinds of risks.

In return for the state taking such risks, companies that are successful should give back, Mazzucato argued. Google’s algorithm was funded by the National Science Foundation (NSF), she noted, but nothing was given back to the NSF.

Perhaps it’s time to change that, she said, suggesting that the state issue income-dependent loans to large companies. That way, if things go well, some money would go back to the state, and if they don’t, the loans would be forgiven.

In her book, Mazzucato notes that while conventional wisdom says we have a dynamic, creative, innovative private sector, and all government needs to do to spawn innovative new industries is get out of the way, that is really not the case. Nor is government a big, bureaucratic dinosaur only there to correct market failures, the book contends.

“I look[ed] at Silicon Valley and … asked, ‘What is it that the state has done there? Did it only fund education, infrastructure and basic research?’ The answer is no. It did much, much more,” she said.

What the state did, according to Mazzucato, was fund most of the basic research behind the commercial products we use all the time and a lot of the applied research. It also provided much of the early-stage seed finance, she said.

“It was actually a key public venture capitalist,” she contended. “The state was a lead risk taker.” While most attempts at innovation fail, Mazzucato pointed out, the state entered different emerging-technology sectors at the early stage, when there is very high technology risk and market risk.

The Small Business Innovation Research Program (SPIR) gave Intel and Compaq early-stage money before those companies were able to get public venture capital money, noted Mazzucato. The Small Business Investment Company program gave Apple $500,000 in its very early stages, something you don’t hear about, she added. .

All the iPhone’s fundamental capabilities owe their existence to government underpinnings, Mazzucato argued. This sometimes appeared in the form of grants, sometimes in NSF funding and in some cases it took the form of government labs doing research alongside the private sector. Speaking about the reduction of the capital gains tax, which fell in the early 1980s from 40 percent to 20 percent, Mazzucato said, “There is no evidence at all that those kinds of tax reductions have ever affected investment.”

Similarly, she said she doesn’t know any innovation economist able to prove that R&D tax credits actually stimulate R&D or demonstrate that it wouldn’t have taken place anyway.

Mazzucato said she was happy to speak at the library because she had spent so many hours there as a child. She noted that reading about Chile in the library had sparked her interest in politics.