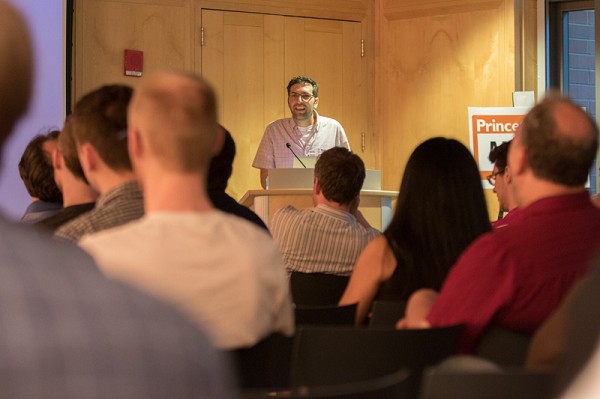 Well-known Your Daily Lex podcaster Lex Friedman, a serial entrepreneur and former Macworld writer, deconstructed Apple’s “mistakes” in a talk that was both funny and informative, providing lessons for entrepreneurs.

Some of Apple’s mistakes, according to Friedman:

The lesson: Don’t love your children too much. With products you create, if everybody hates it, maybe it means that they are right and you are not.

The lesson: The customers aren’t always right, but they think they are always right. Apple added back the capability because doing so would please the customers. “I call this a pity feature.” Sometimes adding something back isn’t a sign of defeat. It’s OK to take pity on the customer, Friedman said.

The lesson: Tough love is hard. Sometimes you have to drag your customers along kicking and screaming. When the company came out with the MacBook Air, they ditched the DVD drive and encouraged users to buy an external optical drive. Apple was saying, “We don’t think the world is done with optical media, we’re just saying we are done with it. …We don’t think everyone has to abandon this drive completely, but we think you can make do a lot of the time without it.” Sometimes you have to hold your customer’s hand a little and say, we’re going to get through this together, Friedman said.

The lesson: Sometimes you have to hold the customer’s hand for a long time. Apple said, in effect, “This is a really significant change, so we’ll let you hang onto the old version for a while longer.” The company also did this when iTunes came out with a new layout, taking away the sidebar. However, they included a button that said “show sidebar,” to help out users who had trouble with the change.

The lesson: Let people know you are listening to them. It’s a mistake to ask people to keep beta testing something for you. It’s better to acknowledge your mistakes than ignore them. Cook gets credit for doing this, Friedman said. Not a lot of companies can afford to direct people to their competitors, but Apple was in a unique place. Friedman also talked about his own experiences at The Daily Plate (now myplate). He said that, in one case, it took him only a day to implement a feature that people were asking for, but other times features were hard to implement, and it could be hard to tell what was really wrong with the site. “Just letting the customer know that we heard them and listened to them, even if it can’t be fixed or we don’t like the idea, gives you a lot of credibility with customers. …You don’t have to recommend they use another site. Just letting them know you listened to them is enough.”

The lesson: Give it the old college try. Remember that sometimes you might want to fix your mistakes and move forward, but you shouldn’t judge yourself too quickly. It might take time to see that a new feature is not catching on. “Also, you can take your old mistakes and develop new ideas,” just as Apple did with Ping, he concluded.

A podcast of Friedman’s talk by Matthew Passy is available on Soundcloud.

For another take on Friedman’s talk, see this blog post by Marc Weinstein, CEO of Ascent Communications.