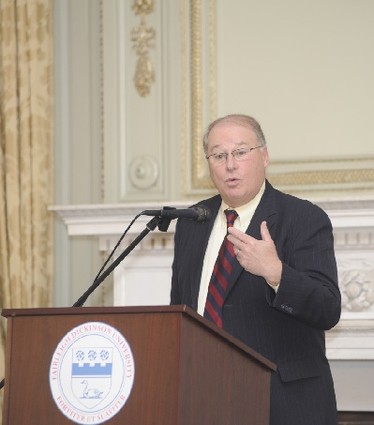 Outgoing Educational Testing Service (ETS) head Kurt Landgraf has predicted that half of U.S. colleges could go bankrupt within the next five years.

Landgraf spoke at the Fairleigh Dickinson University Rothman Institute of Entrepreneurship (Madison) CEO Innovation Lecture on Nov. 20, 2013. His remarks suggest that the rise of online learning opportunities, including those at DeVry University and the University of Phoenix, is part of a higher-education revolution not seen since the Renaissance.

Landgraf also spoke about the challenges of taking over the top job at Princeton-based ETS in 2000. A former classmate of his who was a board member at the company approached him to consider rejoining ETS, where Landgraf had been an associate director of marketing many years earlier.

Landgraf took the position. At his first board of directors meeting, he was informed that the company had only six months before it would shut its doors unless it was turned around, he said.

On Landgraf’s first day on the job, the company’s largest client, The College Board (New York), notified him one year in advance, as required by the contract, that it would be canceling its contract with ETS. And his chief financial officer informed him that there was no money to make payroll that week, he continued.

Landgraf survived those initial days, replaced most of the senior staff and began an R&D program to add new products and expand into new markets.

One area ETS investigated was taking advantage of new technologies, resulting in computer- and Internet-based testing.

Another step was to acquire 10 companies, eight of which turned out to be failures. However, one, Prometric (Baltimore), was a great addition, Landgraf said.

ETS began to take market share away from its competitor offering the Graduate Management Admission Test (GMAT) with its Graduate Record Examination (GRE) and expanding its business internationally through its Test of English as a Foreign Language (TOEFL). Plus, it has added a K–12 product to reach a new market.

Testing has been and continues to be a primary market for the College Board. ETS offers a testing service used by colleges and universities to assist them with their admissions process.

In its next major step, ETS is looking at testing for workforce certification. This would be aimed atemployers who want to learn more about their potential hires. The company is now in much better shape than it was upon his arrival, Landgraf said.

Joseph L. Rosenberg is a certified public accountant and a certified QuickBooks professional adviser with an accounting and tax practice in Florham Park. Contact him at  http://www.cpajoe.net  or 973-443-4432.