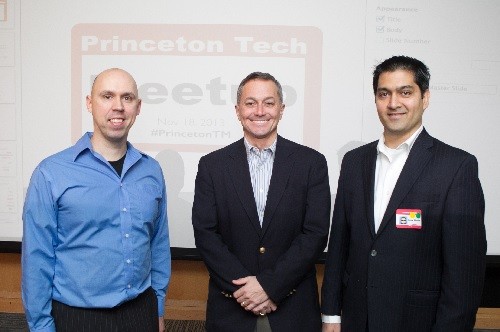 Chris Kuenne, founder and CEO of Rosemark Capital, discussed the cornerstones that startups should live by at Princeton Tech Meetup on Nov. 18, 2013. Kuenne, the founder of Rosetta, the largest independent digital agency in the world in 2010, asked the attendees to consider what differentiates companies that grow.

The Princeton Tech Meetup is one of the largest tech meetups in the state with more than 1800 members. The group meets monthly at the Princeton Public Library.

Kuenne grew up in Princeton, and he smiled as he recalled being thrown out of the Princeton Public Library as a child for talking. He clearly relished the opportunity to speak to a rapt audience of more than 100 at that same library.

Kuenne founded Rosetta in 1998 “with exactly $0 million,” as he likes to say. Reflecting on his own start, he admitted that “entrepreneurs’ lives are tense and intense.” Initially, the business problem Rosetta set out to solve was that “consumers are overwhelmed, making marketing less effective.”

Kuenne’s venture offered a unique marketing-services solution that addressed thorny issues such as consumer “experience fragmentation” and measurement, which he said hardly any marketers talk about.

Rosetta’s invention, developed between 1999 and 2001, was Personality-Based Segmentation, a registered product similar to the Myers-Briggs Type Indicator assessment, which also measures personality. Under Kuenne’s direction, Rosetta took this core concept and applied it to consumer purchase categories.

Rosetta’s focus, said Kuenne, had been to deliver service of significant value to “marquee clients,” who would be referenceable (that is, who would recommend Rosetta to others).

The company also hired the best and the brightest. “We always overhired for the position,” he recalled.

At one point, the company “did 12 private-equity presentations and took the 13th,” Kuenne chuckled. Subsequently, Rosetta’s partners at equity firm Lindsay Goldberg expanded the company’s platform even further.

Over the following decade, Rosetta acquired digital agencies Simstar, Brulant, Wishbone, and Level Studios, reaching a net worth of $220 million in 2010. Rosetta had taken “a kernel of intellectual capital” and embedded it over time, noted Kuenne.

Each acquisition, said Kuenne, “had a catalytic effect on growth,” and each market was quite different from the preceding one. Rosetta was sold for more than $575 million to the French firm Publicis Groupe in 2011, having generated $225 million in revenue that year.

Kuenne offered this advice to those scaling a startup:

Rosetta had always stayed true to understanding the consumer, which better allowed the company to do better marketing, said Kuenne. “It’s really hard to find really good people,” he reflected. He is justifiably proud that Rosetta had been granted five patents on its proprietary Personality-Based Segmentation product.

Now at the helm of Rosemark Capital (Princeton), a private equity firm, Kuenne is overseeing a large research study to refine and validate growth cornerstones in the market. A book is coming out next year. Rosemark specializes in developing digital services and expert business processes and in creating new value from overlooked assets.

“Marketing is fundamentally a humanistic pursuit,” Kuenne said during the Q-and-A session. “You all know that luck plays the biggest single role in success,” he reminded the attendees. “Deliberately choosing your clients is the most important thing.”

Kuenne’s final words of advice: “Get the right customers in early. The composition of your customer base is really the key point.”

Previous: At Rothman Lecture, Landgraf Says Online Learning Will Put Colleges Out of Business
Next: Tech-related Companies on the NJBIZ 50 Fastest-growing Companies List