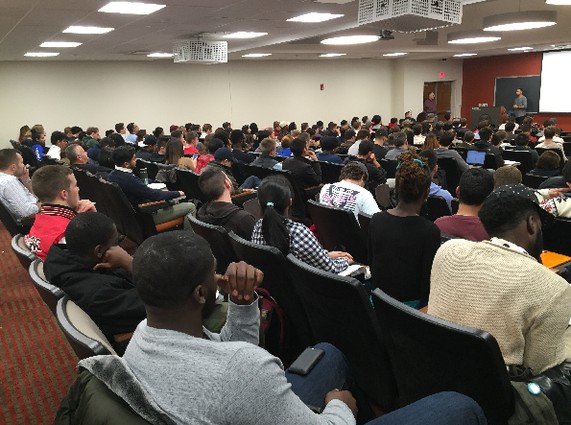 At the Scarlet Startups meetup held at the Rutgers Business School (New Brunswick) on November 30, Gerard Adams, cofounder of Elite Daily and founder/chief visionary officer of Fownders, began his talk to a hall packed with students by showing them a photograph of “the river,” a graffiti-tagged makeshift hideaway for neighborhood kids at an intersection where the small town of Belleville meets the hardcore streets of Newark.

Watching different life paths unfold in real time at the river as a kid, said Adams, forced him to confront the difficult choices, something that he is now grateful for.

It felt “surreal” for the 31-year-old Belleville native to be given the microphone at Rutgers. The entrepreneur and community activist dropped out of college after less than a year. In 2015, he sold Elite Daily for approximately $50 million.

Today, his focus is on running Fownders, a social-impact and entrepreneurship accelerator in Newark that helps underrepresented inner-city youth succeed in business by teaching them about assets like confidence and emotional intelligence, as well as other topics they aren’t learning about in school. At the same time, Fownders also provides the real-life opportunities — through startup competitions, mentorship, seed investments and more — that the tech world is known for.

Early on in his career, Adams was motivated to succeed so that he could give back to his parents. His mother had worked seven days a week at a local grocery store, and his father would hide handwritten quotes about leadership around the house from the likes of John F. Kennedy and Dr. Martin Luther King Jr.

He told the Rutgers students that entrepreneurship is not about the money, but about making a difference by creating value that aligns with your own values.

A pivotal educational experience for Adams, who became a multimillionaire in his early twenties by launching a successful digital marketing agency, was when he “learned about ego” after essentially losing everything he had in the Great Recession, which hit him hard in 2008.

He then relayed a story to the audience about his mother. At fifteen years old, her family’s apartment was destroyed in a fire. She had to go to work to help support her parents and siblings, and take classes at night to avoid dropping out of high school.

After he took that into consideration, it wasn’t long before the gears started turning again. Hearing this story of serious adversity “was the only motivation I needed to get back out there and do it again,” said Adams.

Perhaps as a creative outlet for curbing the post-traumatic stress he was experiencing after his  business had hit bottom, Adams began making compelling video documentaries. One documentary examined the harrowing student loan crisis that the recession had exposed, and the academic and financial establishment that knowingly enabled this broken system, which was failing so many of his careful, qualified and well-intentioned peers.

“My friends were coming to me for jobs,” said Adams, “and I couldn’t help them.”

His sixth and final documentary went viral on YouTube, which is when he both realized his passion for creating provocative content and saw a huge opportunity to create a business around it.

In the period before sites like BuzzFeed had really taken off, Adams was frustrated that there were no media outlets telling stories through the voices of Millennials, so he and a friend created Elite Daily to offer what they couldn’t find — and wanted to see — in the market.

Being bought out was never expected, said Adams, since they didn’t build the company to sell it. The key to their success, he added, was a great company culture made up of employees who also believe in their mission and values.

Today, for an older and wiser Adams, making money is not nearly as interesting as leadership development, social good, helping people succeed and making a positive impact in his community through Fownders.

He has learned about the Silicon Valley scene, incubators and accelerators, and wondered, “Why are we not seeing more of these ecosystems in our inner cities?” Fownders was created to help solve this problem.

After the high-profile Elite Daily sale, Adams started thinking about his legacy, and what impact he will leave behind when his journey is over.

“My heart is where my roots are,” he concluded.

What is Adams’ ultimate advice for aspiring entrepreneurs?

“Money doesn’t lead; it follows. And if you don’t have confidence, it’s because you’re not taking risks,” he told the students.