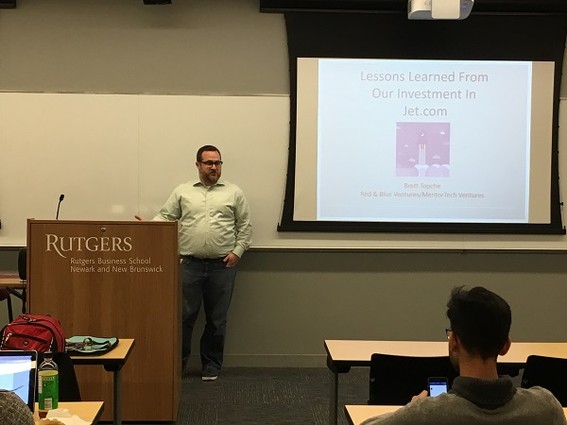 Undeniably, the biggest startup story in New Jersey in 2016 happened in August, when Walmart agreed to acquire Jet, the Hoboken-based e-commerce site, for $3.3 billion. It may have been the biggest e-commerce exit in history, according to Brett Topche, whose firm, Mentor Tech Ventures (Philadelphia), now known as Red and Blue Ventures, had invested in the deal.

Topche came to Scarlet Startups at Rutgers Business School in Piscataway in October to share with students and other interested folks his experience with Jet. Topche has been a venture capitalist for 15 years and got his start with the New Jersey Tech Council Venture Fund. He moved on to Mentor Tech, which invests in companies associated with the University of Pennsylvania. And that is how the venture capitalists at Mentor Tech became acquainted with Jet CEO Marc Lore.

At that time, Lore, who was in the executive MBA program at UPenn, had an idea for an e-commerce company, 1-800-Diapers, which later became Quisdi, whose brands included Soap.com and Diapers.com. One of Lore’s professors told him that he ought to talk to “this venture firm that is right here on campus. A lot of that goes to the power of networking and students taking advantage of the network around them. You have brilliant professors and brilliant alumni that can really help you out,” Topche said. “That’s how we got involved in Quisdi and how we started working with Marc.”

Mentor Tech wrote Quisdi a check. Not only did Mentor Tech establish a relationship with Lore, they worked closely with him.

“We helped him out with some key initiatives when he was working on private labeling, making their own branded consumables,” Topche said.

Particularly, Mentor Tech managing partner Michael B. Aronson was able to get him some key introductions, including folks at the state level who were able to help him get low cost financing when Quisdi was building out its distribution center.

“We were pretty close advisors to the management team and as a result of that relationship we were invited back,” he said. Quisdi was bought by Amazon.com for $545 million, making Mentor Tech’s investors happy, Topche said.

When the opportunity to invest in Jet came along, Topche said, Mentor Tech had to take a look at it. At this point in his presentation, Topche put up a slide showing an angry mob with torches and pitchforks.

“We were pretty confident that this would have been what our investors would have looked like if we had passed on a deal with a founder that had made them so much money,” he said with tongue in cheek. Of course the venture capitalists had to do due diligence, he said.

Topche noted that e-commerce was a massive market — $263 billion and growing in 2014 — and the team that Lore assembled had a lot of insight into the market because most of them came from Quidsi. Also, he said, there are a lot of traditional retailers that are getting bested by e-retailers because they are having a hard time doing e-commerce. Jet was coming to the market with a business model that might help them fight back.

“Ultimately venture capital is about people,” Topche said. Investors know that business plans change. “When you write a business plan, you are making assumptions about what’s going to happen in your company and in the market in the next couple of years. You can’t possibly know that,” he said.

Companies that succeed, he said, take feedback from the market place, know where they’ve been wrong and understand how they can change. They incorporate that change and move forward.Lore had the characteristics of a leader who could do this, he said, but more importantly, he was coming back in the same sector.

“We knew he had a lot of experience and he also paid attention to detail,” Topche said. “Behind the scenes there was a lot of operational and logistics stuff that allowed Jet to work. Marc knew all that cold. He also knew where the hidden costs were in the business.”

The Ability to Raise a War Chest

Also Lore was able to “get the band back together,” Topche said. No founder does it alone, so the fact that the chief financial officer, chief operating officer, chief revenue officer and others all came from Quidsi made a difference. They all had worked together and trusted each other. They knew how to disagree in ways that ended up with a better decision.

“I’ve seen so many companies undermined by cofounder issues or by team issues. If you have a team that works together and trusts each other there’s an enormous reduction of risk for the investor,” he said.

Competing with Amazon was a risk that Mentor Tech had to evaluate. Jeff Bezos is a formidable opponent, Topche said, noting that before he came to Amazon he was on Wall Street and the “biggest shark in the tank … We were really concerned about what Amazon’s response would be.” Mentor Tech spent a lot of time, almost like an exercise in game theory, trying to figure out what they would do and how Jet could respond, he said.

Mentor Tech decided to make the investment of course.

Taking the Heat for Changing the Business Model

So, three months after it launched, Jet changed its business model, taking considerable heat from the press and analysts.

“This is where it comes back to picking the right team. They could have tried to save face and stuck with the model that they didn’t think would work in the long term, but they said ‘no, we’ll take the embarrassment and the heat and we will change.’ ”

Topche said that Jet’s investor group — especially those on the board– essentially told Jet that they hadn’t backed the business model; they backed Jet as an e-commerce play. He said they would let Jet’s smart people figure it out.

“Once they changed the model and took the barrier away from people using it, it took off,” he said. Jet became the fastest growing e-commerce company in history, Topche said.

While Mentor Tech had no formal say in Jet’s exit negotiations with Walmart which were closely held and confidential, Topche gave some opinions about why he believed the deal worked and why it made sense.

For example, Jet’s model had a flaw. In order to succeed, Jet had to have the lowest cost out there before they got to scale. However, they didn’t have the volume yet to support that. Walmart has the lowest cost of sales in the industry because they buy more of everything, he said.

“If you take Walmart and layer on Jet, Jet’s model gets profitable really quickly,” he said.

Walmart’s CEO, Topche said, was also trying to figure out how to leverage its assets for e-commerce.

“In a world where overnight shipping and fulfillment has become vitally important, they had mini distribution centers (stores) everywhere. Layering on Jet’s technology, which allows you to optimize which distribution centers you will ship from” would be helpful, Topche said.

Also, Jet helped solve a brand challenge for Walmart. Jet could attract a customer base that Walmart couldn’t touch because that customer wouldn’t think to walk into a Walmart.

“Walmart is retaining the Jet brand for exactly that reason,” he said. “They can have a Walmart that targets one demographic and Jet that targets another, and they don’t have to get in the way.”

And Jet was still going through a lot of money at a time when market conditions were tightening. Customer acquisition at this scale can be expensive, Topche said. Jet had to build a brand, spend a lot of money on TV advertisements and purchase a domain name that would help people remember the name of the company, all of which took an enormous amount of capital. In 2014, when Mentor Tech invested, “people were writing giant checks all over the place, but good times tend not to last,” he said.

Then Walmart came in to the mix with a very attractive offer, he said. If Jet hadn’t taken the Walmart deal, they were going to have to “raise at least a billion in cash and sell a good chunk of the company,” Topche said.

They were going to have to grow their valuation a while lot just to get back to the point they already were, just to make up for all the dilution they were about to take.

“When you combine the tightening market conditions with Walmart as a logical partner, then you have the transaction we wound up with,” Topche said.

After his discussion of the Jet deal, Topche took questions from the Scarlet Startups audience.

Previous: From Don Katz, CEO of Audible: Embracing the Comeback of a Great American City through Tech
Next: NJ TECH CORNER: Innodata