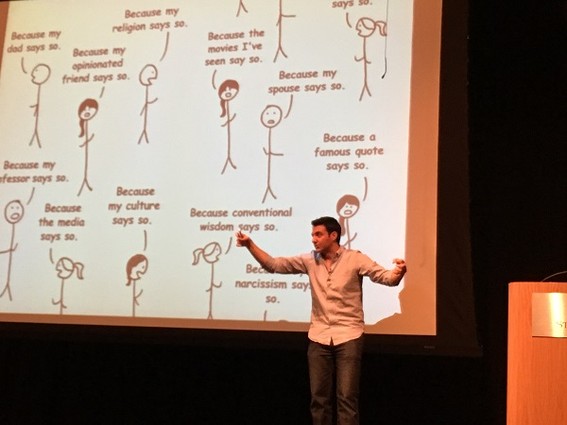 Blogger Tim Urban gave the students and faculty at Stevens Institute of Technology some insights into how renowned entrepreneur and innovator Elon Musk thinks about entrepreneurship. Urban is the author of the blog “WaitButWhy.” His talk, on May 3, was part of the Thomas H. Scholl Lecture series at Stevens.

Urban noted that his blog drew the attention of Musk, who had an assistant call and ask if Urban was interested in writing about him. “I got on the phone with him a few days later and we talked about his companies.” He asked Musk about the big picture, to understand why Musk is doing what he is doing. “I thought if you want to understand why he is building this car, and why he is building this rocket …we needed to do a big, big zoom-out.”  After many encounters with Musk, Urban was able to find a pattern in the enterprises Musk develops.

“The initial goal which drives every ounce of his body is ‘how do we get an increased chance of a good future.’” Musk is thinking in terms of probabilities, Urban said. He wants to know “how do we increase the probability” that we will have a good future, and not “some sort of terrible existential problem.”

Then Musk asks, “What are some major changes in the world that would … up that probability?” Musk wants to understand the things that are endangering us, and then look to do something to change it. That “something” becomes his goal.

Musk realizes that he needs a sustainable business model, given that no one will fund innovation for innovation’s sake. So, his idea for Tesla is to create the most beautiful electric car, which everyone will want to have, and others will create look-alikes to compete with him. Suddenly, everyone will be driving beautiful electric cars, which will help get the world to a sustainable future. In the meantime, the company will be funded to find innovative solutions to problems associated with the electric car, clean energy and the environment, like battery storage.

With Space Exploration Technologies (SpaceX), Musk is turning his attention to the fact that “we have all our eggs in one planet. If something bad happens here, like an asteroid or massive world war, we can’t go anywhere, and this could be the end of humanity. … This doesn’t assure that humanity would be safe, but if we could get ourselves to multiple planets, that would seriously help,” Urban said.  Musk believes that he will be able to use reusable rockets to establish a cargo route to Mars, and that entrepreneurs will find different reasons to go and develop there. “That will lead to life insurance for the species.”

Urban said that another of Musk’s companies, Neuralink, had him confused until he zoomed out to evaluate it. “I know why he is doing this. He is doing this to ensure the possibility of a good future for mankind.” Right now artificial human/brain interfaces like cochlear implants only tap about 500 neurons, when there are actually millions of neurons in the brain, Urban said.

To make progress on this front, you need to be able to tap many more of those neurons. “You need to make the equivalent of the integrated circuit” for this brain enhancement industry. “Also, no one wants skull-opening surgery.” You need to figure out a way to implant artificial interfaces in a safe, noninvasive way.

The ultimate goal is to give humans an interface to artificial intelligence (AI). Musk believes that “if we can have a high bandwidth connection to AI, we will have an AI layer … in our minds. … If all of us can be superman, it’s OK.” We don’t want just one superman, Urban said.

Urban concluded his speech with an analysis of how Musk is able to make all this happen. He believes that Musk just doesn’t believe in conventional wisdom or “bibles,” as Urban called truisms. “If his reasoning tells him something that the bible doesn’t say, then the bible is probably wrong, or at least is worth experimenting with,” he said.