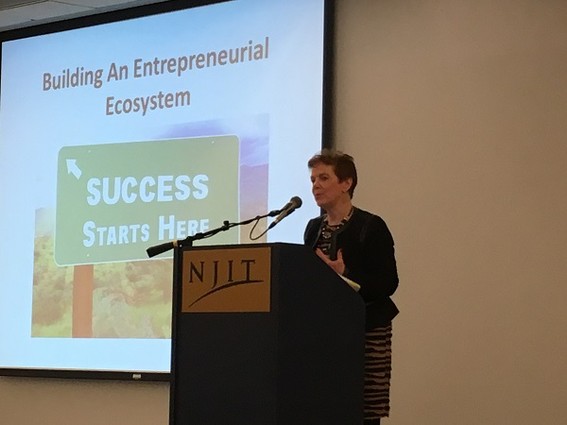 Judith Sheft was the keynote speaker at the GNEC Opportunities and Awards Breakfast. | Esther Surden

The topic of “Innovation through Collaboration” was explored at the Greater Newark Enterprises Corporation (GNEC) 2015 Opportunities and Awards Breakfast, held on Nov. 10. Steven M. Gomez, executive director of GNEC, talked about the organization’s mission to help Newark area entrepreneurs with access to capital and entrepreneurial education.

“We wouldn’t exist if the entrepreneurs didn’t exist, and it is their responsibility to hold us to task to make sure that we are providing the best service that we can,” he said.

Gomez also announced that GNEC is deepening its relationship with New Jersey Institute of Technology (NJIT) and theNew Jersey Innovation Institute (NJII), and that it will be operating out of NJIT’s Enterprise Development Center in 2016.

The audience included many representatives of the Newark ecosystem. Politicians such as U.S. Senator Cory Booker, Congressman Donald Payne Jr. and Governor Chris Christie sent messages of congratulations. GNEC’s partners and sponsors were also there.

Mike Wall, associate vice president of constituent relations at NJIT, and former executive director of GNEC, introduced Judith Sheft, associate vice president of technology and enterprise development at NJII (which is an NJIT corporation). He said that Sheft was unparalleled in her “commitment to small business, in seeing opportunities, in seeking strategic partnerships.”

Sheft said that she was providing a message on the importance of linking and leveraging resources in order to move ahead. “Think about the power of possibilities and the power of ‘yes’.”

After reviewing NJIT’s history of contributing technical talent to Newark’s industries, she said that NJIT still had a mission to support and connect with small businesses. “We aren’t only interested in technology businesses. We are interested in businesses across the entire spectrum,” she added.

Companies that operate in identifiable clusters, and take advantage of unique resources that are available to them, are going to do better than companies that try to make it on their own, Sheft told the group.

She quoted the old adage, “If you want to go fast, go alone. If you want to go far, go together.” It takes time to build these relationships, but businesses get impatient and think that if they did it themselves, they would get it done and move ahead.

“But what we have found here in Newark and in this community is that by working together, linking and leveraging resources from all of the various organizations that are participating here in the room, we are able to help our entrepreneurs, go farther together,” said Sheft.

She then referred to a Kauffman Foundation report that says that entrepreneurs are the ones who are driving economic growth and development. The report found that from 1980 to 2005, it was the young firms, those under five years old, that accounted for all the net new-job growth in the country, according to Sheft. This is thus a good time for entrepreneurship, she concluded, as there are a lot of capital resources available, talent resources that have been shed from corporate jobs, as well as infrastructure resources.

Sheft explained how linking and networking worked in one particular instance. “One of our small businesses is leveraging a sensor to figure out whether vaccines have been exposed to temperature variations.” If vaccines have been exposed to temperature fluctuations, they are not potent enough to deliver the medicine the recipient needs, she said. The fellow who is running this business is in his 80s, and you may think that he wouldn’t attract investors. After listening to what he wanted to do, NJII was able to connect him with another resource, someone who had formerly worked in Big Pharma but was looking to get into a startup situation. It was a win-win for both parties, she said.

Sheft explained that NJII implements a lot of programs throughout the New Jersey ecosystem to help entrepreneurs find capital, giving them training and support so that, when they talk to perspective funders, they can put their best foot forward.

She noted that, during the proof-of-concept stage, companies often dig into their own pockets to survive. “We like to tell them to be as small as possible. They have to think about how they can get to where they need to get to with the smallest outlay of money,” she said. NJIT is working together with GNEC on some financial training programs. “It’s a long funding cycle, from self-funding to trying to get government grants and loans”… to being able to introduce companies to angel investors. “If we can make those introductions, our companies are going to be able to do better.”

Sheft mentioned that she had read a book called Screw the Valley: A Coast-to-Coast Tour of America’s New Tech Startup Culture: New York, Boulder, Austin, Raleigh, Detroit, Las Vegas, Kansas City, by Timothy Sprinkle.“The lesson of this book is that you shouldn’t try to be the next Silicon Valley.” Rather, communities have to figure out what they need to do to build tech hubs, and then build clusters in a way that makes sense for them.

She then paid homage to Brad Feld’s rules on building a tech ecosystem. One of Feld’s observations is that communities take a long time to generate. Here in Newark, Sheft said, they have to think about how they can create sustainable companies, and it may take 10 or 15 years until they really have the genesis of an ecosystem. Diversity is also key to bringing in all the contributors to an ecosystem.

One way NJII and NJIT are helping entrepreneurs is by pulling together all of the various resources that can help entrepreneurs, she said. “We can ask them, ‘have you talked to a particular Hispanic chamber of commerce, have you talked to some of the people at Essex County,’ because maybe they will be able to help.”

Finally, she urged the audience to think calmly about what they could to do to build something sustainable in Newark.

Previous: 10 Top Stories “Around New Jersey” for 2015
Next: At AT&T Civic App Challenge, $13,000 Awarded to Military Circle of Support App