Home » News » At Waterfront Ventures, the Story of RJMetrics, a Company Started in South Jersey 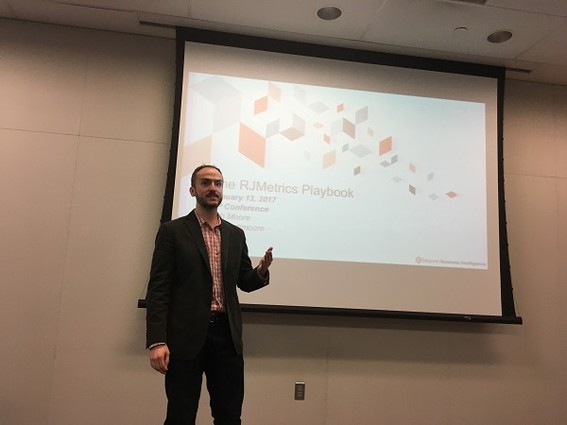 Robert J. Moore came to the UP Startup Conference, held at Waterfront Ventures (Camden) on January 14, to tell his story about the growth of his startup RJMetrics (Philadelphia), which culminated in the sale of the company’s CloudBI division to Magento Commerce.

Moore stayed on to run his business, renamed “Magento Analytics,” while his cofounder, Jake Stein, is now the CEO of Stitch (Philadelphia), which is what remains of the RJMetrics Pipeline division. Moore is also chairman of that entity.

His description of how the business (which started in an attic in Collingswood, grew at some inexpensive offices at Waterfront Ventures, and ended up in Philadelphia) progressed to the point of sale captivated the audience.

He traced the story of RJMetrics back to the lessons he learned when selling software that he had developed in college to help poker players determine the statistical odds of winning. However, the real story began at Insight Venture Partners (New York), where, after a stint cold-calling CEOs, he became more of an analyst, researching businesses that Insight wanted to fund, finding out who their best customers were and how these businesses could get more customers like them.

Moore and Stein met at Insight, and decided that they’d prefer to be at the other end of those cold calls. They wanted to become entrepreneurs themselves. While still at Insight, they spent a lot of their spare time proposing ideas for all sorts of businesses, and failing at them. This was before the days of Lean Startup, but that method was essentially the one they used to find new opportunities.

Finally, Moore realized that everyone they spoke to about their ideas said something like, “I really wish I could just know who my most valuable customers are, and how to get more like them.” Moore told the audience, “RJMetrics came from the sense of the market pull I was getting.”

The two founders quit their jobs on Friday, Sept. 13, 2008, and the very next business day Lehman Brothers declared bankruptcy. The country went into a deep recession. Cash had dried up, but they were going to have to make their business work, anyway.

At this point, they realized that they could continue to live in New York and have a business for six weeks or they could move to the greater Philadelphia area (where Moore was from and Stein had gone to school) and operate for six months. Moore moved to Collingswood and Stein to Philadelphia, and the business was started in an attic in Collingswood.

“For the next two years we did the grind,” he said. “I went into debt, but took no outside financing. Every month we added one new customer, two new customers, and just kept it going. Over the course of those two years, we got to the point where we could hire employees.” Moore recalled that the Collingswood attic had no air conditioning, so the when the company had some money it moved to Waterfront Ventures, at 200 Federal Street in Camden. “It was awesome. I think it was a great spot to actually start this business. It gave us things that made us look like a larger company.”

Moore then explained the economics of running a company like RJMetrics. He noted that at the outset of the sales cycle, it’s very expensive. There is a sales person who talks to the customer, and someone who implements a free trial, hosting fees and technology outlays. Once a customer starts paying, the company recovers that outlay and eventually makes a profit from the customer. RJMetrics was losing money on more than half its customers because it was growing so quickly, but those customers would eventually become profitable.

The startup needed outside money to finance its growth, however. “If we lost any customers, we would have missed a payroll.” RJMetrics was a 10-employee company at that time, and the thought of missing payroll was terrifying, he said.

“What was happening to us is that we were unable to grow as quickly as we wanted to because of the unit economics of our customer growth. Now was the time to think about smarter capital and financing strategies, when we knew those dollars would go to a good place. …We were able to go to our customers and talk to their customers and investors and put together a seed round north of $1.25 million.” The startup then began investing in marketing and customer success and the growth kicked in, he said.

Moore stopped contributing code to the product, and began to focus instead on “critical stuff like recruiting, culture, team building, PR, content marketing, increasing our visibility outside the Philadelphia region, business development, board relations and venture capital relations,” while still staying very much involved in product strategy.

“In 2015, the scaling broke for us,” Moore continued. “We had raised a lot of money in a short amount of time, unless you compare us to our competitors, who raised a lot more money in a short amount of time.” For example, GoodData (San Francisco) had raised more than $100 million. “The companies we were competing with were so flush in cash that they didn’t mind … spending three dollars to make one dollar.” The analytics and business intelligence market had become so hot that there was enormous pricing pressure on these companies to scale.

Moore said that for RJMetrics, the only channels that did scale were paid advertising and outbound sales; the company was doing market push instead of generating market pull. But it would have needed to raise hundreds of millions of dollars to make that approach work in the long run. “And by the time we realized this, no one wanted to put that much money into data analytics companies anymore because the market was flush and the economics didn’t make any sense,” he said.

“This is the moment when many VC backed-companies go to die. They run out of capital.”

The founders decided that, in order to survive, they had to make the company attractive to a suitor. They split their offerings into two distinct business lines, each with its own branding: RJ CloudBI and Pipeline. “We wanted it to be so if a profitable company acquired us, they wouldn’t have to worry about us making them unprofitable.”

Once they had done the preparation work, they started to talk to key partners about a merger.  “The hardest day of my professional life was when we cut headcount at RJ. We had to let 25 people go in sales and sales support that were hired on the backs of the economic model we were pulling away from.” Moore noted that everyone who was laid off found new jobs within three months, but it was still a terrible ordeal for those 25 people.

Among the candidates for a merger was Magento, which had been one of RJMetrics’ best partners. In fact, more than a third of RJMetrics’ customers were also Magento customers. But Magento was part of eBay, a mammoth organization that would be impossible to crack. Coincidentally, however, eBay restructured and spun out Magento.

“That changed everything,” Moore said. The startup made sure to get its executive team in front of Magento’s board of directors and the relevant people who could make decisions at the private equity firm that had bought that company. After a period of courtship, the RJMetrics’ CloudBI business line was acquired by Magento and the Pipeline business line was spun out and became Stitch.

“This thing that we built is in the hands of an enormous ecosystem, and people will still be using the software 10 years from now. That was important to me. And we are still swinging the bat hard on a business that has newer technology, but doesn’t have the challenges in the market that we ran into with Cloud BI,” Moore concluded.