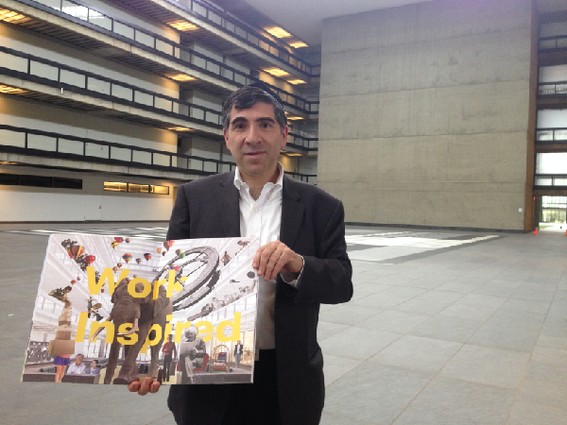 Bell Works, the restored and repurposed former Bell Labs building in Holmdel, is now open to the public. The first office tenants have already begun moving into the space, which was previously the site of some milestones in the history of science and technology.

Somerset Development, which is handling the restoration, expects to have 200,000 square feet of the 2 million-square-foot building filled with office tenants and facilities by Q2 2016. The building will also feature a hotel and conference center, as well as spaces for dining, retail and health and wellness uses. Moreover, Somerset is collaborating with Toll Brothers to develop on-site luxury residences outside of the building.

“Quality employees today don’t want to check their life at the door in the morning and pick it up at night. We’ve been liberated from our desks by the very technology that was created in this building,” said Ralph Zucker, president of Somerset, in an interview with NJTechWeekly.com.

This iconic building, designed in the 1960s by Eero Saarinen, once housed some of the best minds in science who performed fundamental work on communications systems.  “What was done at the Saarinen building was mostly the final design and development and transfer to manufacture of transmission and other systems,” Bell Labs historian A. Michael Noll told NJTechWeekly.com. There are  plans to install a dedicated museum in the future.

Somerset is making efforts to preserve the proud legacy and history of the building, basing aspects of the renovation on Saarinen’s original vision. In fact,  the site is expected to maintain its status as a historic landmark.

Bell Works also has approvals for an educational component, which will occupy a space of about 60,000 square feet. It has held some preliminary discussions with New Jersey colleges, universities and K-12 schools; and Bell Works intends to create a “small Bell Labs” within the facility:  a “2,000 to 3,000 square foot laboratory space” for students to utilize.

By taking advantage of on an on-site central power plant (with five to six chillers), which had previously been a feature of Bell Labs, Bell Works will be implementing cogeneration as the building fills up, in order to provide electricity and useful heat at the same time.

There is interest in putting solar panels on the roof of the building and over the parking lots, according to Zucker, who said that Somerset is planning a solar heating system of up to 10 megawatts.

For data storage, the office spaces have raised flooring — another feature left in place from the Bell Labs era —  in order to accommodate the occupants’ on-site servers. Bell Works’ chillers and backup generators “can handle any servers and storage that clients bring in,” said Zucker.

Access to the public areas at Bell Works is free, said Zucker. “We intend to treat this as public space.”

[This story was updated and corrected on 7/11/2015, based on new information provided.]

Previous: Some NJTC Internet of Things Competition Winners from New Jersey
Next: Panelists Give Job Hunting, Career Advice to IT Professionals at AITP NJ Meeting

704 More posts in Around New Jersey category
Recommended for you