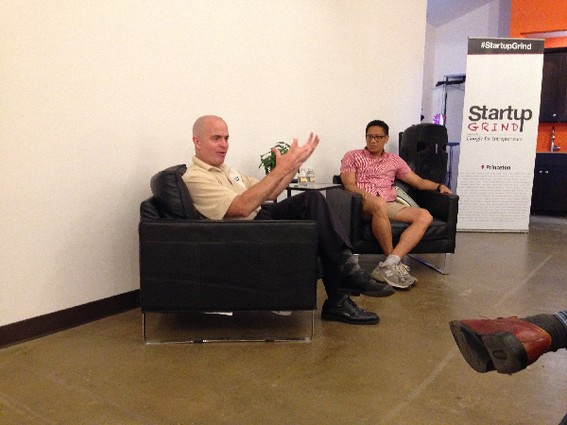 Lane, who has sold products since the age of 14, discussed his life’s story and gave entrepreneurial advice in a “fireside chat” with Tigerlabs cofounder Bert Navarrete before an audience of tech enthusiasts and entrepreneurs.

The lesson about sales was made clear to Lane when the company that acquired his first startup, Brownstone Solutions, also bought a Brownstone competitor that had worse software, but better salesmen.

“Most people know this now, but back then, we thought code was all that mattered,” he added.

As a young man, Lane expected to become a programmer, not an entrepreneur. But when he was offered a high-paying quality-assurance position early on, one that required him to review other people’s code, he turned it down. “I didn’t want to. I thought mine was better,” he reflected.

Turning down his first job offer, based on conviction and a sense of purpose, may have been his first step on the path to entrepreneurship. But this wouldn’t be the last time that a blurring of the line between choice and destiny would push Lane out of his comfort zone.

By the age of 29, he was head of development at Princeton’s Logic Works, hot on the heels of their IPO.

“Six months later, our CEO was canned and the stock tumbled,” he said.

With low expectations, Lane spontaneously approached the new CEO with a request to take over what he saw as Logic Works’ “failing” sales and marketing operations.

He got the job.

Suddenly, Lane had 125 people working for him, and had “no idea what I was doing,” he admitted. “I had to figure it out rapidly.”

Having a “can-do” attitude and enough courage and humility to try something — without any guarantee that you will succeed — is what separates successful entrepreneurs from the rest, Lane told the crowd.

In a twist of fate, Logic Works was then acquired by Platinum Technology, the same company that had previously acquired Brownstone Solutions. Not long after, Lane “became miserable” and quit Logic Works.

“Relationships with VCs change when the stuff hits the fan,” he warned.

In 1998, he started the forerunner to Billtrust, PayTrust, now an Intuit company, in his basement. This was at the height of the “dot-com gold rush,” according to Lane.

He had the idea of redirecting bills to a processing center — the first-ever service that would let customers receive and pay bills electronically — and raised $1 million in one month. Six months later, PayTrust raised $3.5 million from AT&T; and in less than two years, he raised another $30 million from SoftBank. PayTrust eventually raised a total of $75 million.

“I am not saying this to brag. Anyone could have raised money at the time,” he joked.

However, while PayTrust was a great service, it had “no business plan,” admitted Lane.

PayTrust began losing $3 million per month, and was soon two months away from bankruptcy. The company had to cut down on its losses by laying off staff, and that included the sales and marketing operations. Lane referred to this time as “emotionally brutal,” with many sleepless nights.

“I screwed up. I had to suck it up and make tough decisions.”

Even after the cuts, PayTrust was still bleeding cash. Lane accepted a gloomy “recap” deal from VCs, and ended up with “effectively zero” in company stock.

The incentive to keep running the company was lost. In April of 2001, Lane quit PayTrust.

“They washed me out, but were shocked when I quit,” he said.

He took the summer off. “I felt like a failed leader, an entrepreneur who failed.”

His reaction was to take a “safe” job as a coder, because he viewed it as what he was meant to do all along.

Again, Lane would learn that entrepreneurship is not necessarily a conscious decision.

After going through interviews and taking personality tests, he was never hired as a coder because the hiring managers weren’t pleased with his test results. It was obvious that he was cut out to be an entrepreneur.

Lane was reluctant to start another company, but because it was too difficult to get hired, he felt “forced” to start Billtrust in 2001, given that he had two children, aged five and three.

“I was never going to talk to a VC again,” he said.

This time around, he knew how to drive growth on his own. After five years, by 2006, Billtrust was raking in $4 million in revenue, without any help from VCs.

During the early days of Billtrust, Lane admitted, he felt like an impostor. “I still didn’t know what I was doing.” In hindsight, according to Lane, having that level of self-awareness was healthy, and the most important trait for success.

To this day, Lane constantly recruits new board members so that he can to learn from them.

His advice to entrepreneurs? “Educate yourself. Screw up fast, and get it over with, because it will happen. You’re going to be wrong. Get it over with. There will always be some pivots along the way. Talking to people is the most important thing,” he advised. “If you don’t have a circle of mentors, start assembling one.”

Lane believes that being too risk-averse is what hinders many aspiring entrepreneurs. They may wait too long, for perfection that will never exist, before taking the leap. “You are going to make mistakes. It’s not going to be perfect, so you might as well get started,” he said.

“It’s lonely at the top,” said Lane. “Just pick up the phone and ask for help.”