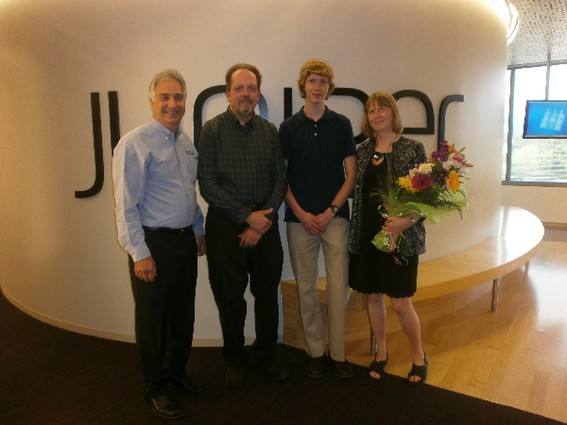 Established in 2012, the scholarship provides monetary support to New Jersey residents who intend to major in engineering at a four-year college.

A scholarship committee identifies academically talented “young leaders with the potential to take on the toughest challenges facing our communities, to connect and empower people everywhere, and make a meaningful difference,” the scholarship website states.

The applicants need to demonstrate community involvement for several years and have a high school grade point average of at least 3.5. The annual program originated in New Jersey, but has since expanded to the three other states where there are primary Juniper locations: California, Virginia, and Massachusetts. The scholarships are administered through the Silicon Valley Community Foundation.

This year scholarships went to Kevin Takacs, a graduate of Cherry Hill High School East; and Ian Lawson, a graduate of Middlesex County Academy for Science, Mathematics and Engineering Technologies.

Takacs, who will be attending Rowan University, said that his future goals are to stay in the South Jersey area and help better his local community through his work as a civil engineer. “I am very thankful for the generous Juniper Networks Engineering Scholarship, which will aid me in financing my education as a civil engineer to achieve these life goals,” he said in an email.

Lawson told NJTechWeekly.com that as a child he had had a lot of fun building with Legos. “The whole design process was fascinating to me, and I loved just sitting for hours putting pieces together and ending up with something really cool. After years of creating static models, I finally saved up enough money to get a Mindstorms robotics kit. With this I was able to actually create working robots that integrated sensors and motors through programming a CPUW.”

He noted that when the iPhone came out in 2007, he decided to see how it was built on the inside. “I found that the process I’d used to create robots with Legos was the same that the engineers had used to create the electrical systems, sensing units and physical layout of the iPhone. From that point, I decided I wanted to be an electrical and computer engineer.”

Lawson visited the Juniper Networks OpenLab (Bridgewater) with his parents during the summer, and learned more about opportunities for engineers at the company.  He will be attending the Hajim School of Engineering and Applied Sciences at the University of Rochester this fall. Takacs was unable to make the trip to OpenLab.