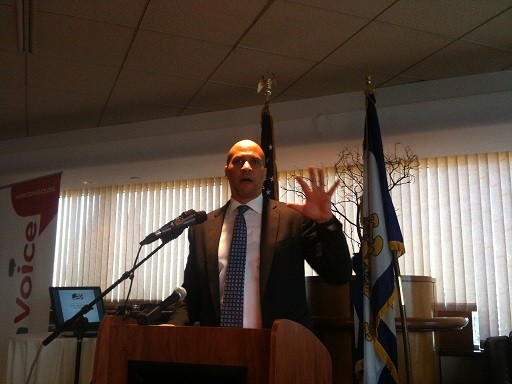 Cory Booker speaks to attendees at a TechVoice breakfast in Newark. | Esther Surden

Newark Mayor Cory Booker, who will probably be running for U.S. Senate, discussed technology at a breakfast meeting May 5, 2013, hosted by the newly formed tri-state chapter of the technology industry lobbying organization TechVoice.

Also speaking at the gathering was Robert Feldstein, head of New York Mayor Michael Bloomberg’s national Partnership for a New American Economy, who addressed the need for tech industry lobbying to ensure that innovation-friendly immigration reform is finally accomplished this year. (NJTechWeekly.com will have more on Feldstein’s remarks in an upcoming article.)

TechVoice was recently formed by IT industry association CompTIA and the Technology Councils of North America to obtain the ear of Washington on issues affecting small and medium-sized tech companies. Moderating was Elizabeth Hyman, vice president of public advocacy at CompTIA.

Booker was introduced as both a mayor and a tech entrepreneur — he is a founder of Waywire, a N.Y.-based startup that focuses on online video curation.

While his remarks touched only briefly on the goal of the meeting — to have small and midlevel tri-state tech companies’ voices heard in Washington on topics like immigration reform — Mayor Booker did speak about how to make Newark attractive to tech companies and how government initiatives using big data are transforming cities like his.

Booker said he had asked startup leaders in Silicon Valley why they are there or aren’t in N.J., the “innovation state.” He was told they liked the proliferation of bars, restaurants, galleries, sports teams and concert opportunities in Silicon Valley.

Newark, and New Jersey in general, Booker said, are becoming places that can attract tech entrepreneurs. “We have the raw material here, from great universities to an incredibly educated population. We have to focus on the cities where we have the infrastructure,” he added.

Said the mayor, “My team is in awe of the dark fiber running right through Newark …we are becoming the fastest city as far as giving innovators and entrepreneurs … high-speed connectivity.

“We believe that by having universities here like NJIT [New Jersey Institute of Technology] and Rutgers, we are going to be able to connect people with sources for the brightest minds in the globe who are coming here to study,” he proclaimed .

Booker said he believes the city has already shown it has a focus on tech innovation through spaces like the NJIT Enterprise Development Center (EDC), which is dedicated to nurturing tech startups, and “we want to expand that,” he said.

“This is the first time in 60 years that Newark’s population is growing, the first time in decades our tax base is surging, the biggest redevelopment time in Newark since the 1950s,” he asserted, adding that the Brick City is becoming a “great place” for tech entrepreneurs to live.

Booker explained that when Newark builds market-based housing, many residents who buy are “net” new residents of the state. He added that New Yorkers have told him they can go to a hip place [in Newark] with restaurants, sports events, galleries and concerts and “can also buy a house for the cost of a doorknob in New York City. And if I need to go into New York [for business, a concert, a show or dinner], I can beat my friends who live on the Upper East Side.” He said he believes Newark has the competitive advantage due to its position as a transportation hub.

The mayor had high praise for the open-government and Gov. 2.0 accomplishments of mayors Mike Bloomberg of New York, Thomas Menino of Boston and Edwin Lee of San Francisco, saying his counterparts are helping tech make government more efficient and open. Mayor Bloomberg, noted Booker, has pulled together other mayors to share ideas. “He is saying that mayors can be innovators!” he declared.

While Booker sees much that is wrong in Newark and other cities today — he cited kids with less social mobility, lower literacy rates, higher healthcare costs and fewer healthcare options — he believes “it is in the technology sector that we are going to unlock the next wave of American possibility and potential.”

Referring to Feldstein, Booker said, “The gentleman who spoke before me is one of the great innovators in making a responsive government, in creating a predictive government.”

By increasing government’s efficiency and effectiveness and helping to streamline it, technology is also helping to lighten the burden on taxpayers, said Booker. Once you remove that burden, you create an environment more conducive to business growth and business expansion, he added.

Newark has used big data and software to monitor and streamline its inspection processes, said Booker. “We’ve increased the number of inspections an inspector does in a year by 98 percent,” he noted.

Booker asserted that currently government is often merely reactive and responsive. His team is innovating to assess problems before they even become apparent, he continued. He lauded Mayor Bloomberg’s attempts to determine where ambulances should be positioned, for example, so they are in place before emergencies occur, saving transport time to the hospital, hospital costs and lives.

The mayor also referred to his own use of Twitter, saying, “we can crowdsource tens of thousands of eyes,” via social networking. “My own residents are telling me [of] problems that I find out about before my departmental directors. We are trying to figure out ways to make that more efficient,” he added.

Finally, Booker touched on the immigration debate. The quick, easy way to address the need for trained individuals who can work in tech, he said, is to increase the number of H-1B visas granted. However, he believes “we are doing it all wrong and we are not preparing our kids for a 21st-century economy.” Booker said that at a tech conference he recently attended, one company said it didn’t care whether its employees held a degree or not — it just wanted people who could code. He added that when students leave degree programs, “half the stuff they are learning is not pragmatic for market needs. We need to focus our education system on creating a pipeline of the greatest natural resource we have, the genius of our children.”