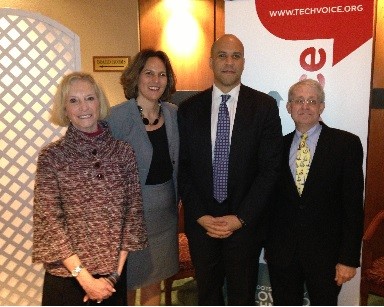 The debate over the relationship between immigration reform and innovation came to New Jersey recently as Robert Feldstein, who helps coordinate Mayor Bloomberg’s national Partnership for a New American Economy, addressed a May 7, 2013, meeting of the newly formed lobbying group TechVoice in Newark.

TechVoice was recently formed by IT industry association CompTIA and the Technology Councils of North America to obtain Washington’s attention on issues — including immigration — that affect small and medium-sized tech companies.

Said Elizabeth Hyman, vice president of public advocacy at CompTIA, “Several of the fastest-growing privately held technology companies in America reside right here in the tri-state area. The emergence of so many tech firms in the area makes it timely and valuable for TechVoice to mobilize and activate on policy issues that advance the industry nationally and in the tri-state area.”

The so-called Gang of Eight immigration bill has been introduced in the Senate and is making its journey through the Legislature, said Feldstein. He noted, “No one loves this bill, which may mean they did something right. Everyone is going to try to make changes. We are going to try to improve it as much as we can.

“We want green cards for Science, Technology, Engineering and Math [STEM] graduates; an entrepreneur visa; market-based caps for the high-skilled visas; and, in general, a reframing of the immigration system to be one that helps reflect our economic needs,” he continued.

Feldstein issued a call to action, noting that the Partnership for a New American Economy is hosting a virtual march on Washington on May 22  – May 23, 2013.

The March for Innovation aims to unite leaders, celebrities, politicians and others to create a digital blast across the social media world. It will include Twitter town halls and Google Hangouts.

March organizers hope hundreds of thousands of people will blog, tweet and use Facebook, Instagram and other social media methods “to call on Congress for measures that drive innovation, like startup entrepreneur visas and green cards for STEM workers,” said Feldstein.

This is necessary, he explained, because the economy has changed. Today’s great companies are based on access to talent, he noted, yet Americans are not pursuing a STEM education. “The number of Americans studying STEM is growing by less than 1 percent per year,” he said.

“Yes, we need to improve our education system and we need to encourage more Americans to study STEM, but it may take a generation to achieve those results,” said Feldstein.

More than 50 percent of Ph.D.s currently graduating from American universities are foreign-born, said Feldstein. When we keep STEM grads here, that creates 2.2 jobs per foreign-born worker, he added

Also, over the past 30 years, nearly all net job growth has come from startups, he asserted. In 2011, more than 28 percent of new businesses were started by immigrants, he said — both “corner-store” businesses and the cornerstones of our economy.

Yet there is no special visa for entrepreneurs, said Feldstein. Entrepreneurs are usually not highly skilled enough to apply for H-1B visas. “I know entrepreneurs who have raised from $1 million to $2 million in capital and have six or seven employees,” yet they couldn’t secure a visa, he noted. The Partnership was able to help one such entrepreneur by getting him featured on the Diane Sawyer show, but it can’t do that for everyone, he said.

H-1B visas also pose problems for their recipients. This year the visas were gone within one week, said Feldstein. If workers do get an H-1B visa and apply for permanent residency, the wait can be 10 years. They have to stay with one company during that time, he explained.

Our competitors know our system is broken, said Feldstein, noting that the U.K., China and others have all instituted visas for entrepreneurs. Chile gives entrepreneurs $40,000 to move to that country and start companies, with no obligation. China provides companies cash and lab space, and allocates spots at the best schools for entrepreneurs’ kids, in an attempt to lure foreign-trained businesspeople to return, he stated.

“If we continue to erect obstacles to people coming here, the best and the brightest will go elsewhere,” he concluded.