During the pandemic, many edtech startups were launched to cope with the problems brought on by the sudden proliferation of online learning.

One of the major problems that came to light was the inability to ensure that the person taking an exam was the intended test taker. Also, it was almost impossible to figure out if students were cheating, perhaps looking at crib notes or their phones. Another issue to be solved: how to make the test-taking experience equitable for all involved.

Many schools and test-giving organizations began looking for technologies to help them solve this problem, and several “integrity platforms” were developed.

“A lot [more] schools have adopted an integrity platform in the last two years than did in the previous 10 years. In 2019, the market was $300 million. Now the market is $1.2 billion,” said Shantanu Dev, cofounder and CEO of Beyond Exam, a Princeton-based edtech startup addressing this market.

He added that there are now about 20 players in the space, including Beyond Exam, but that his company is unique. “We are trying to democratize this particular space.”

The company was founded just before everything shut down for the pandemic two years ago, and Dev was able to assemble a team of Princeton-area execs and tech people to work on the startup part-time during those two years. In some cases, they were able to give more of their time than they normally would, he said, because of the lock-down and the lack of a commute for the team. The company also assembled an impressive board of advisers who are using their functional expertise to help the startup grow and operate successfully, he said.

Since a young company like Beyond Exam is often bootstrapped by its founders’ sweat equity, Dev thought it would be the right thing to give everyone on the founding team and the company’s advisers some ownership. “People are motivated to get things done. And it’s been working out very well,” he said.

Dev and his team spent a significant amount of time talking to multiple experts in this domain to identify the optimal set of requirements needed to create a flexible product that would fill a void in the education space. While there are many competitors in the space, this startup believes that its “stress-free design,” with flexible scheduling options for test takers and zero-touch configurations for test givers, will be successful.

During the past two years, Beyond Exam has conducted several pilots for its initial product, including one with a university, another with a learning portal and another in the recruiting space, Dev said. The company took what it learned from these pilot projects and adjusted the product to ensure that it would meet customer needs.

The company is taking its time entering the market with its unique product, Dev noted. Beyond Exam will first address small schools, those with fewer than 2,000 pupils.  “This is basically a growing market with a lot of green pasture ahead of us.” This market has been slow to embrace online assessment, and high pricing by the competition could be one of the reasons, he stated.

Another issue is the student experience. “We are trying to concentrate our value proposition more towards giving a seamless experience for our students,” said Dev. He added that he wanted a “zero-touch policy” for the students, meaning that if they must set up through Blackboard, Canvas or some other online educational software, it will be a one-time step, and then they can forget about it.

Focusing on Social Responsibility and Equity

Social responsibility will be part of the company’s DNA, Dev said. “We are working on ways that people who have the need can get the exams free of charge, so they can show their expertise and get to the job market or go to the next level of education.”

The current platforms are not very equitable. “I’ll give you a real problem I read in a newspaper. A woman of color was taking a test online. And the software was repeatedly telling her to increase the light so the software could recognize her face while taking the test. She had to increase the light so much that it was hard on her eyes to read the material. This made the test very stressful for her and probably skewed her results. We tested our product with many different demographics, so that we made sure it isn’t a problem for us.”

Also, “we’re also trying to be very focused on how to be more inclusive in our platform.” That means they are working to customize the platform, so that a person who wants to take a test, for example, but needs someone sitting next to them to read the questions, can do so. Or the platform can accommodate someone who needs extra time to take tests.

Another problem with test-taking online is accommodating test interruptions. Many of the software programs kick test-takers offline if a dog barks in the background or the phone rings, or a family member walks into the room, he said. Beyond Exam has developed artificial intelligence that won’t kick people out for minor interruptions, but will report the major interruptions to the test administrator.

The company’s first Beta version (1.10) came out in January 2022 with all the inputs from the design partners.  Later modules will include a delivery platform and deep analysis that will enable the test giver or test taker to use this assessment exercise as a stepping-stone to improved learning and to a better learning road map, Dev said.

19 More posts in EdTech category
Recommended for you 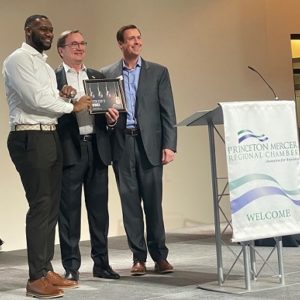 One New Jersey tech startup showed off its patented headphones that use “bone conduction technology”...