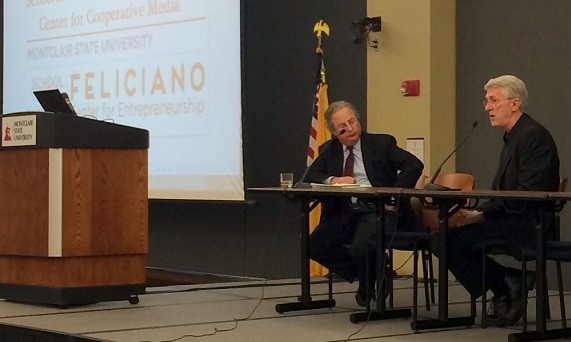 A bit of sparring between media gurus Merrill Brown and Jeff Jarvis occurred at the Montclair State Entrepreneurship Meetup March 25, 2014.

Jarvis, it seems, is all about finding sustainable business models in online journalism, while Brown thinks there is a role for supporting journalism through public-private partnerships, individuals who have enough money to take on losing propositions and philanthropies.

It was fun to watch these two important voices in media disruption take on the topic.

Before he became director of the School of Communication and Media at Montclair State University, Brown was a pioneer in online news as the first editor–in-chief at msnbc.com.

Jarvis, a recognized leader in the development of new business models for entrepreneurial journalists, writes the blog BuzzMachine.com.

Jarvis began by laying out his premise that we don’t know where media disruption is heading any more than Gutenberg had known how his invention — the printing press — would affect life and learning. We still think of the Internet’s impact on sites or publications, he said. “I think that’s limiting us greatly,” he noted, adding that people need to find opportunity in disruption, “not just whine about it.”

Brown posited that since some publications, such as TV Guide, are making a comeback, maybe there isn’t as much disruption as people had thought, and the situation could be stabilizing.

Jarvis said it’s OK to keep print publications alive if you can obtain efficiencies from them, but, he noted, “I do think that the inevitability of the Internet [means] we are going to shift to digital, and print business models are not sustainable.”

Brown noted that disruption is not yet complete at this time. Businesspeople like amazon.com founder Jeff Bezos are buying newspapers, for example.

Jarvis said he had a lot of hope for Bezos’s investment, because Bezos is the kind of investor who can disrupt business models as he had done with his other enterprises. “He sees new ways of doing things,” Jarvis said.

Responding to a question from Brown about the New Jersey news ecosystem, Jarvis said he is hopeful about what is happening in the Garden State, thanks to New Jersey News Commons, which was established at Montclair State. News Commons started the website NJ News Commons repost.us, a content-sharing network. It’s a way for large and small websites to share content and audience, he noted.

Jarvis said he hopes the news ecosystem will evolve so that news sites are able to share ad networks and, therefore, revenue in the future. News Commons already allows New Jersey sites to share training and support. Independent websites can reap the benefits of being in an ecosystem, Jarvis pointed out.

City University of New York research has shown that beat journalism is the heartbeat of journalism, Jarvis added. Independent websites can be sustainable on their own but are better when they work together. “There are 565 towns in New Jersey, all [of which are] an opportunity for an online journalist. They need a watchdog,” he said, noting that each town needs coverage and is a business opportunity. Jarvis believes there can be viable business opportunities for vertical online publications covering New Jersey’s environment or the state’s elderly, for example.

Addressing the students in the room, he added, “If you can find areas that are not adequately covered, you can use the tools and platforms that exist now for free. You can network with similar businesses and collaborate with them and share effort, technology and learning.”

Jarvis’s emphasis on business drew a little fire from Brown, who said he had found repeatedly that journalistic and news enterprises are now being funded by philanthropic and [nonprofit] foundations. He prodded Jarvis on this, saying that his sparring partner had taken a stand in his blog against philanthropy’s involvement in news.

Jarvis responded that though he isn’t against philanthropy, “there isn’t enough philanthropy to do all the journalism that must be done … I argue that we have to fight to find sustainable models for news.” He said he agreed that philanthropy has its place — for example, to create backstops for advertising, and marketing support for these sites.

“I don’t think we should give up on the sustainable model and hand it [journalism] over to charity. If we do that, we’ll be rudely shocked at what little journalism we have,” said Jarvis.

As far as TV news goes, he said, “I think that New Jersey is a blank slate. Since we don’t have a TV station here, we have an opportunity to rethink what media looks like.”

The meetup was presented by the Feliciano Center for Entrepreneurship, the School of Communication and Media and the Center for Cooperative Media, all based at Montclair State University.