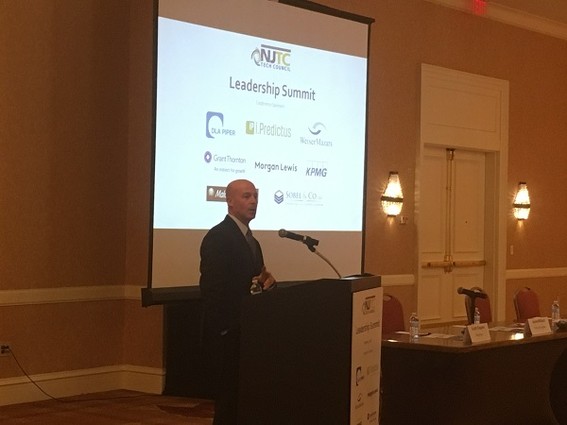 Risk-taking as a part of leadership was on the mind of Mark J. Alles, CEO of the Summit-based global pharmaceutical company Celgene, when he gave the keynote speech at the NJ Tech Council Leadership Summit on October 5.

A Journey of Risk-taking and Serendipity

Alles began by telling the group that Celgene’s story is one of a real-life journey of risk-taking and serendipity, shaped by the people involved and by a “convergence of insights in human biology and what’s happening as we learn more about the human condition, and in particular the world of cancer.”

Alles talked about the bold decisions the company’s leadership had made that transformed Celgene into the huge multinational corporation it is today.

In 2005, the company had about 300 employees. It will end this year with just under 7,000. “In 2005, we turned down term sheets from all the multinational pharmaceutical companies to license our drug Revlimid for international sales.”

The problem was that, while the licensing agreements would have rewarded shareholders “amazingly well” that first year, it wouldn’t have rewarded them over time. The company said no, and decided to go global alone. This was a risky, bold decision, he said.

Alles also discussed Celgene’s history with regard to risk-taking. Celgene started out as a chemical and environmental company. It had no vision of being a pharmaceutical company. “The business model failed from 1986 to the late 1990s.”

However, he said, Celgene’s scientists were trolling academic universities, on the lookout for medicines that companies didn’t want so that Celgene could survive by licensing a drug.

Taking a Chance on Thalidomide

Gilla Kaplan, one of Celgene’s trustees, recommended that Celgene take a tremendous risk and license Thalidomide, the drug associated with birth defects that had been given to pregnant women to prevent morning sickness.

Thalidomide had anti-inflammatory properties that Kaplan thought could work for combatting other diseases. It turned out that the drug worked well for patients who were wasting away from AIDS, which was a big problem during the 1980s AIDS epidemic.

It also turned out that Thalidomide could be used to kill blood cells that feed myeloma cancers. You know how that happened? he asked. A woman who was married to a cardiologist suffering from myeloma at age 39 did the research and connected the dots. She contacted Celgene, and  the company was able to make the medicine available to her husband and two other patients with the disease

“Two of the three patients responded beautifully. Unfortunately, her husband did not.” However, Celgene was born as a drug company. “All of a sudden, Thalidomide, this notorious drug, was a miracle drug for what had been for decades a death sentence where you would die, treatment all in, in three years.”

Celgene rebranded Thalidomide as “Thalomid.” Last year, Thalomid and its successors, Revlimid and Pomalyst, accounted for $6.97 billion in sales, or more than 75 percent of Celgene’s revenue, according to a Bloomberg news report.

Never Forget the Power of the Individual

“Never forget the power of the person,” Alles said. “Every time there has been a breakthrough in organizations I’ve been part of, you can trace it back to one person who took a risk.” That person always worked with a team that was empathetic, that was respectful. “It was all the things we say in society that teams should be, but somebody took a risk.” Without that person representing the team and taking a risk individually, “a lot gets left on the table.”

He continued, “When we hire people, we hire them one at a time. We don’t hire teams at the same time. We want to hire people who can come in and be part of teams, but we expect extraordinary things from individuals.” The power of the individual is an enormously important concept for leaders who want to build sustainable organizations.

Keeping the R&D side of the business in continuous operation is another feature of leadership that Alles considers important. “When you have success, never stop building. … If you think you are doing well, build. If you think you have an opportunity, take it.”

“You must execute a build when you are in a ‘virtuous cycle.’…We are one clinical trial away from obsolescence,” he said. “If a competitor does a study in one of these areas where we are doing all this great work that improves the standard of care, tomorrow I lose market share, I lose revenue.”

The importance of an authentic and very clear mission and vision statement can’t be underestimated, Alles continued. “The ability to galvanize people in an organization around something that they can own, that they can feel,” is important. “They come into work every day and they have a purpose.”