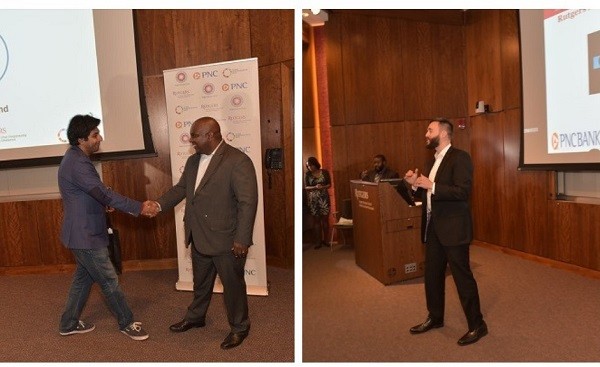 Lyneir Richardson, executive director of CUEED, was master of ceremonies. He spoke about CUEED, and pointed out that the alumni and students of the school have made a substantial impact on small businesses in New Jersey. Listing CUEED’s accomplishments, Richardson noted that the number of entrepreneurs assisted per year has increased from 100 to 400. These companies generate a total of $30 million in revenues a year, with $6 million of those revenues staying in Newark; and they’ve created 214 jobs. Moreover, CUEED has increased its business survival rate to 90 percent, which is well above the national average of 50 percent, he noted.

Following Richardson’s introduction, Michelle Abel, of PNC Bank, spoke about the tenacity, creativity and boldness of the entrepreneurs, which have contributed to social stability and unity, in general and in the current chaotic times. PNC Bank, the sole sponsor of the event, invests in entrepreneurship and in low- and medium-income businesses in the Newark area.

Next, Rebecca Rodriguez, of dirtsa studio (Somerset), who teaches in the Etsy Craft Entrepreneurship Program, spoke about how Etsy gives artists and craftsmen access to broader markets. With Etsy, artists and craftsmen don’t have to invest in advertising and marketing, as Etsy does it for them. She also mentioned that, during the depths of the recession, people realized that they could still make ends meet by selling online.

The award winners from the Etsy Craft Entrepreneurship Program were:

Debnam manufactures plus-size clothing. Rodriguez-Davis and Reyes-Storey manufacture body care products that are pure, without any chemicals. Davis’ and Reyes-Storey’s businesses were both outgrowths of their experiences caring for a sick child who needed chemical-free products. Honar and Tchorzewska sell art. When Huggins, who makes and sells dolls, accepted her award, she said that she had always liked dolls, and had been making dolls since she was teenager.

After the Etsy Program Awards, Dr. Jeffrey Robinson, associate professor at Rutgers Business School and assistant director of CUEED, introduced Kerryn Krige, of the Gordon Institute for Business Sciences (Johannesburg, South Africa), an expert on social and environmental entrepreneurship. She asked the graduates, “Now that you have graduated, what’s next? You want to effect social and economic change. How?”

Krige then discussed the economic divide between the haves and have-nots in South Africa, continuing with a story about Ashley, a street vendor to whom she gives money. She asked, “As good as that makes me feel, how does that improve the life of Ashley? Yes, he has some money in his pocket. But is he better off now than before?”

She continued, “Giving philanthropically does not develop economically. It only reinforces the divide. Benevolence has consequences. If you add profit and choice, that equalizes.” She added, “We don’t exist to change the world. We catalyze change and are rooted in the community.”

Afterwards, the following honorees were presented with CUEED awards:

Edward LaPorté, director of the New Jersey Office of Faith Based Initiatives (NJOFBI), received the Social Innovator Award for his work in promoting social entrepreneurship through NJOFBI programs and grants. He provides seed grants, and is trying to shift philanthropic giving in the direction of social entrepreneurship.

Rahul Anand, an honor student and successful business entrepreneur at The Ideas Maker, received the Rutgers Student Entrepreneurship Award. Upon receiving the award, he said, “Collaboration is the key.” He then thanked all those who had helped him out.

Clark Lagemann, a successful New Jersey entrepreneur, received the Rutgers Alumni Entrepreneurship Award. His takeaways to entrepreneurs were: It will be 10 times harder than you think. Question what you do. If you haven’t failed yet, then you haven’t been working hard enough. Also, “You must create your own opportunities.”

Marcela Andrea Zuchovicki received the Ellis Still EPI Alumni Award. The late Ellis Still was an  alumna who was very helpful to other students. Zuchovicki is an actuary by training who has helped fellow students develop their business models. Her assistance was such an asset that it was turned into a course that she now teaches.

Antonio Seabra, who was not able to attend the event, received the Impact Award. He has a successful food company, located in Newark that caters to multicultural needs and has been instrumental in revitalizing the community.