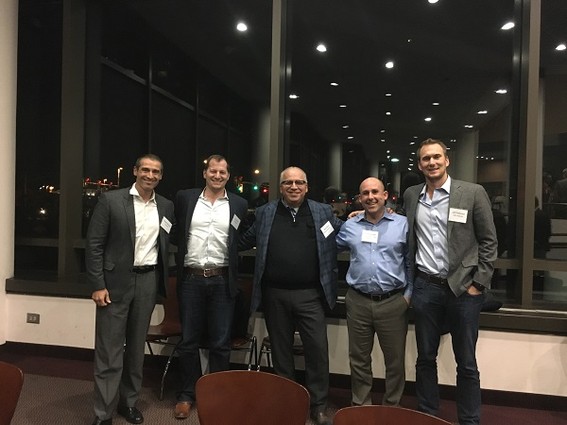 Between soaring valuations that have reached more than $1 billion for tech or tech-enabled “unicorns” and the recent volatility in the stock market, it’s a no-brainer that entrepreneurs may be confused about the issue of company valuation.

In February, a panel of venture capitalists and venture-backed tech-company CEOs addressed the issue at a teq.Konnect meeting at the East Brunswick office of the law firm McCarter & English.

They were especially interested in how to arrive at just valuations that would correctly position companies to be attractive to investors in future funding rounds.

The panel was moderated by David J. Sorin, the managing partner of McCarter’s East Brunswick office and the head of the Venture Capital & Emerging Growth Companies practice.

Are valuations too high?

After the panelists introduced themselves, Sorin addressed what he called the elephant in the room. “Everyone is talking about whether we are on the precipice of another bubble, whether valuations are too high. What do you think are the long term trends in valuation?”

KEC’s Parkinson, whose company invests at the early stage, said that he was already seeing valuations come down a little bit. “As an early-stage investor, we usually say ‘who cares what happens in the public markets?’ But at the end of the day, we are affected.” He explained that if it’s harder for companies to go public, then everyone has to be a little more careful with his money.

“There’s been nothing too drastic yet,” he added. “Our advice to our companies has been if you can raise a little bit more [capital] now, do it.” Parkinson believes that his fund will continue to invest at the same pace as before, doing 10 to 12 deals a year.

“But we’ll have to be prepared to put a little bit of extra money aside to bridge some of the companies until they can get to their next round, and see how this plays out.” They used to say that if you were a Software-as-a-Service [SaaS] business, you needed $100,000/month to go out and raise your A Round, but now it’s probably more than that, he explained.

Some growth companies can wait out a bad market

Susquehanna’s Feldman said that most of the companies his firm invests in tend to be in the growth stage. A lot of them are making money and are profitable. “Their option in a market like this is to do nothing. They sit back. They wait a year. They wait two years if they think that the market isn’t good for them to raise capital or sell a piece of their business.” But when those companies decide to wait before moving on or exiting, it can affect Susquehanna’s ability to put money into other companies. “We invest in three to four companies a year, and I think it will be hard to pull that off” if companies hang back, he said.

However, Feldman thinks that there continues to be a huge demand and movement towards automation and technology, and that there’s still a huge part of the economy that isn’t taking advantage of technology.

“Valuations will probably come down. You will see companies with big valuations and big burn rates … go away in the next six months. They will probably consolidate or go away because investors won’t be able to justify [supporting] them anymore.” He added that good companies, even ones that are losing money (but not irresponsibly), will still succeed. Some of the best investments, he reminded the group, were made during some of the worst years for the economy: 2007 to 2009.

While he is not raising capital at the moment, ShopKeep’s Olk noted that colleagues had told him that the broader market’s volatility is affecting them, depending on what pocket of the market they address. Business-to-business (B2B) companies that are generating revenue aren’t seeing a crunch in multiples, he said. However, consumer-based businesses that have to invest in customer acquisition are typically more affected by the downturn because consumers are fickle and are more expensive to acquire. “Those are the companies I worry about more in this kind of market,” he said.

Olk stated that valuations are “completely irrelevant” until he has a term sheet. When he raises capital, he said, “I work on the common denominator that nobody wants to miss out on the deal, so the deal will move as quickly as I do.”

It’s like dating, he said. “I want to be the best-looking person at the prom. I lead a process where I try to make as many friends as I can, but I can be passive-aggressive about the way I approach it, depending on how badly I’m looking for capital.”

He noted that, to be attractive, a company has to have a large addressable market, a fantastic team and a product that people like. But those factors just get you to the table. “If  I don’t have a term sheet, then I’ll be worried about the multiple that the VC is willing to play. That changes, depending on where you are in the genesis of your company.” If you are a seed- or early-stage company, it’s more about product vision; as you move on, it’s about metrics and momentum, said Olk.

Besner added, “I do think that, especially in SaaS, there is already an adjustment going on.”  He noted that many high-flying companies in his sector of human resources are contracting in valuation. “I’m feeling an immediate effect. I’m having investors contact me on the topic.”

Both Besner and Olk pointed out that there is a Series A crunch underway. The amounts deemed to be seed money are moving upward. “We are a B2B SaaS company trying to raise capital, and we worry about the Series A crunch,” Besner said. “We just raised $3 million, which was deemed seed, which would probably have been considered Series A or close to a Series A not too many investment cycles ago.”

“I do think that the best time to take capital is when people will give it to you,” he added.

Sorin then asked the CEOs on the panel how they handled the tension between trying to get the best valuation for their startup and having a valuation that positioned them for future growth. The founders had different opinions, based on their positions in the market.

When ShopKeep was in the process of raising a $60 million round, investors were more sophisticated about how they looked at the business financially, and they examined the underlying economics, said Olk. It was more about the numbers than anything else. That was because ShopKeep was in a growth stage. The numbers dictated the valuation.

“I’d rather not have a greedy valuation,” said Besner, whose company is earlier on. “I’d rather have the fuel to be able to reach the next milestone.”

Besner added that, in the last round of financing, his company received multiple term sheets, and, “We did reach a valuation that was fair.” CultureIQ’s business had doubled in the prior six months, he said, and that is exciting.

“I think it’s important to have the right valuation,” not just a valuation that makes your company look as if it’s worth more than it is, Besner said. “Some of my prior investors were willing to invest in a significantly higher valuation in this last round, but we wound up taking capital from some institutional early-stage venture funds at a valuation that was more modest.”

Besner considers it important to have the right partners, “in the sense that they could help me grow the business smarter, thinking about unit economics, thinking about the strategy and the approach and making sure that we approach each stage of our business correctly.” He noted that  angel investors had “great intentions, but they just weren’t professional investors.”

Previous: Computer problems at N.J. MVC halt driver license, ID services
Next: How a Rutgers Math Professor is Using Numbers to Fight the War on Terror