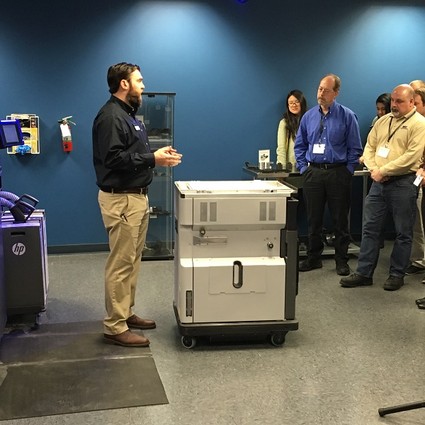 While 3D printing has been around for awhile, today’s digital economy is creating greater demand for this technology, as manufacturers increasingly use it to make products faster and at lower cost.

That was one of the messages from industry experts who discussed this topic at an event on January 17 hosted by Cimquest, a Branchburg-based provider of manufacturing products and services.

The global market for 3D printing, also known as “additive manufacturing,” is expected to grow to nearly $50 billion by 2025, according to industry statistics. Meanwhile, more companies have been providing services for this technology in recent years, with nearly 100 3D-printing equipment manufacturers in 2016, compared with half that number two years earlier.

“I’m really excited about additive manufacturing, and how it will be a significant contributor to the Fourth Industrial Revolution,” Cimquest CEO Rob Hassold told the attendees at the event, which highlighted Cimquest’s recent partnership with IT company HP Inc., in which Cimquest will sell HP 3D printers.

At the event, Cimquest and HP executives provided some details of HP’s 3D printing system, which claims to offer lower barriers of entry to additive manufacturing by providing faster build speeds and high-quality parts at a lower cost. Cimquest announced in December that it would sell the 3D printing technology in its marketing region, which encompasses the Mid-Atlantic and Northeastern states.

Over the years, there has been quite a bit of hype about the impact of 3D printing on the manufacturing sector. Much of it failed to materialize because the technology had not reached the high level of performance seen today. “The technology was not ready for prime-time at that time,” Hassold noted.

But 3D printing has grown by leaps and bounds since its early days, with the technology now being used more in the manufacturing process. For instance, 3D printing is gaining traction in the healthcare industry. Virtually all earpieces for hearing aids and a growing number of dental devices are produced with this technology.

Many companies using 3D printing have become more profitable as a result of the reduced manufacturing costs. Nearly 50 percent of companies surveyed in the third annual “State of 3D Printing” report, put out by online 3D-printing service provider Sculpteo (San Francisco, Calif), reported a greater increase in their investment in 3D printing in 2017 than in the prior year.

Brian Boyle, HP’s eastern region partner manager of 3D printing, said that the time had finally arrived for 3D printing to play a greater role in the $12 trillion-dollar global manufacturing sector. With many industries using automation to create products, Boyle noted, 3D printing is in a strong position to replace older manufacturing technologies.

“Our goal is to be disruptive,” he said of HP’s plan to become a market leader in 3D printing in the manufacturing field. “If you’re making anything, this is a great solution.”