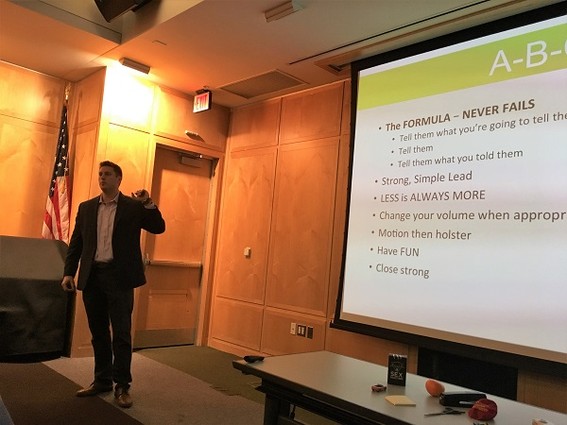 At the Princeton Tech Meetup in March, members learned communications techniques that tech entrepreneurs can use. The speaker was Sean O’Grady, a former TV journalist and online entrepreneur who overcame his own fear of making presentations.

The meeting also featured an interactive speaking exercise in which volunteers from the audience participated.

Gratitude is the best way to start a presentation

“Gratitude is the single best way that you can start any presentation,” whether you’re on TV, walking into a room filled with a small number of venture capitalists, or presenting to a large crowd, he said.

Once you have thanked the audience, establish your own credibility, O’Grady advised. Then, as if to follow his own counsel, he described some of his professional experience. After he graduated from The College of New Jersey (TCNJ), he went to work for Time Warner, at TV stations in small markets. He next worked at New York One and CNN, and “from there I went national.” But he didn’t like “sticking a microphone is someone’s face” and saying, “How do you feel, now that your father just died?”

In 2006, he said, “I had an opportunity to create a company with a Swedish VC” called “CareerTV.com” (San Francisco, Calif.), a news site designed to help college students get jobs.  This was “a really fun time” in his career. After 2010, he went out to Sausalito to help launch Glassdoor.com. “My old CTO at CareerTV became the director of business development at Glassdoor,” where  O’Grady became employee number seven. “Talk about a ‘catch fire’ experience!” he said.  O’Grady’s role there was a mixture of biz dev and communications.

“I wound up rotating out of Glassdoor because I wanted to come back to the East Coast.” He became a communications professional at Deloitte, where his role was to create content. O’Grady became part of a team that helped prepare Deloitte consultants to go out and speak in the marketplace. After Deloitte, he was the executive producer of the 2012 Paralympic Games, in London.

A sudden change in fortune

“Then the winds of change blew: I got let go.” After a career that had skyrocketed, O’Grady was deeply affected by the sudden change in his fortunes.

“I was a person who had become accustomed to making a living by speaking, and I developed a tremor in my right hand,” and would go into interviews and get really nervous and sweat, he said. “If I had something in my hand, it would shake.”

He joined Toastmasters, and “they put this humpty dumpty back together again.”

The day before his unemployment checks ran out, he got a job with a company called “Oxford Communications,” in Lambertville. “I write, direct and produce videos.” Oxford also started leveraging him as an executive coach for corporations and nonprofits. And he is an adjunct professor of public speaking and leadership development at TCNJ.

“The purpose of what I do is to get people comfortable with being uncomfortable.

“At some point, you will be sitting in a room and someone will say, ‘what do you think?’ or ‘tell me about your business’ or maybe a really blunt ‘why should we hire you?’ Being able to answer those questions in an accurate, brief and clear fashion certainly helped me.”

When you speak, always set expectations for your audience, he said. Create a clear path as to where the conversation should go.

True to form, O’Grady set his expectations for the interactive speaking exercise, in which members of the audience would have the chance to practice his techniques.

Breathe and keep on going

“What I learned from Toastmasters is to breathe and keep on going.” Repeating that over and over again eventually allowed his tremor to disappear.

Practice makes things better, but not perfect, so don’t try to be perfect, he said. “If you try to memorize your way to being perfect, you are taking away the biggest single value that an individual can add to any meeting, and that is yourself, your humanness.”

He then presented two acronyms, ABC and SVO. ABC stands for “accurate, brief and clear.” “You will never go wrong with ABC,” he said. “If you can be the person in the room that talks the least but says the most, it is going to make a difference.”

SVO stands for “subject, verb and object.” When you need to say something fast, go with SVO, he said. Giving an example from his TV days, O’Grady said “A man shot his wife.”

For an entrepreneur, the lead might be, “We are here today because our business is growing and we need support” or “We are seeing unprecedented growth, and in order for us to meet our next metric we are seeking X thousand dollars.”

O’Grady continued, “If you get into the habit of speaking in subject–verb–object bursts, not only will you look super intelligent compared to other folks who are not speaking this way in the conference room, but if you go on TV, where you have 90 seconds to pitch your product or service, it will be incredibly helpful to speak in sound bites.”

Previous: Tech Company Execs Learn How to Sell to the Enterprise at All Things Marketing Meeting
Next: Scenes From the Show Floor at NJ-GMIS