The second episode of the new NJ Tech Council show called “Startup Showdown” featured three startups that are in the clean technology space.

Kicking off the presentations was Steinberg, who introduced his product by saying, “Our company has created drone-based 3D modeling software for solar contractors. Right now, in the solar industry, like many engineering- or contracting-focused industries, the workflow is incredibly manual. Think of people using ladders to climb on roofs,” getting dimensions and writing them down on paper.

“So, we’re trying to remove as much of the manual workflow in the solar industry” as possible. “Our software provides a lot of benefits, including reducing time on site up to 90 percent and helping minimize any change orders that occur,” he said. Scanifly focuses on the U.S., but also has customers globally. The company has been in several accelerators, and is seeking funds to expand its team and boost sales, “with the goal of reaching 200 customers and a million dollars in revenue.”

Socolof, who has known Steinberg for a while, noted that he thought inspection and planning is a great application for drones. He added that, to him, it’s more “about proving the value to the solar installers who, in my mind, are generally a fairly low-tech group of folks, and [about] getting them to really accept this and avoid getting on the roof.”

Shearman introduced his company by saying that “at Impossible Diamond, we are working to address sustainability with respect to diamond production.” For over a century we’ve been pulling diamonds from the ground, and more recently producing them in the laboratory, he said, but both approaches have negative impacts on the environment.

“We have the notion that a diamond is just crystalline carbon.”  This “beautiful little gemstone is made of the same thing that’s polluting our atmosphere. So, the company founders asked themselves, “Would it be possible to pull that out of the atmosphere and refine it into diamonds?”

Lab-grown diamonds, in general, are a step in the right direction in that they avoid the human rights concerns associated with so-called blood diamonds, Shearman said. But he noted that there are still ecological concerns related to lab-grown diamond production. “What we are doing is capturing carbon from the air,” using a patent-pending process. “The carbon isn’t good or bad, it’s just in the wrong place. We’re using atmospheric carbon collection to pull down this harmful greenhouse gas and transform it into something that’s truly beautiful.”

Shearman noted that new Federal Trade Commission (FTC) rules “no longer require you to label man-made diamonds as synthetic. In the eyes of the FTC, a diamond is a diamond is a diamond.” He added that this is a market that is really starting on its growth curve due to the keen interest of millennials in saving the environment. It is on the same adoption curve as electric vehicles, he said.

Breese told Shearman, “I think it’s a challenging market, when you’re dealing with premium items, to introduce consumers to an alternative, even though, at the end of the day, it may be the same composition.” He wondered if Shearman had considered creating the diamonds for industrial use, which is a huge market.

The final presenter was Witman, of GrowSquares, who noted that 90 percent of people have trouble growing a garden, and that many are dissatisfied with their results. Gardening is an $8.5 billion industry. “We’ve developed a gardening system that’s fun, productive and, more than anything else, incredibly easy to use,” Witman said.

In addition to shipping a personalized patch of garden, the company has an app that can determine what will grow in your garden. “All you have to do is tell us the size and shape of your particular garden.” When you place your phone on the ground, the app collects 33 different features of the environment, including sunlight levels and the taxonomy of the soil. All of that input helps the company to “inform the exact right combination of plants for your space. Not only does it tell you the right plants, however, it actually identifies what’s missing from your native soil  —  nutrients, minerals, bacteria  —  all the things that can help you grow a better, more sustainable garden.”

“We package all of those components together,” said Witman. Seeds are embedded at the center of a garden square, which is then wrapped in a nutrient-rich case. The product is biodegradable based on the exact life of every particular plant. “And all we do is kind of stack them up together, send them out to our users, where they unfurl them in the most complementary, congruent type of layout. All you do from there is water, and the process begins.” Not only does the garden app continue to identify what’s going on with your plant, but it makes very specific individualized recommendations in order to increase your yield, such as the exact amount of time to spend watering, when to thin and when to pick.

Zamsky asked him if he was experiencing repeat use of the product, and Witman responded that the company has been through two or three different growing cycles, and that about 90 percent of its customers have purchased a second time. The company is also building a community of its users, and expects to reap the benefits of a network effect as these users tell others about GrowSquares, he said. 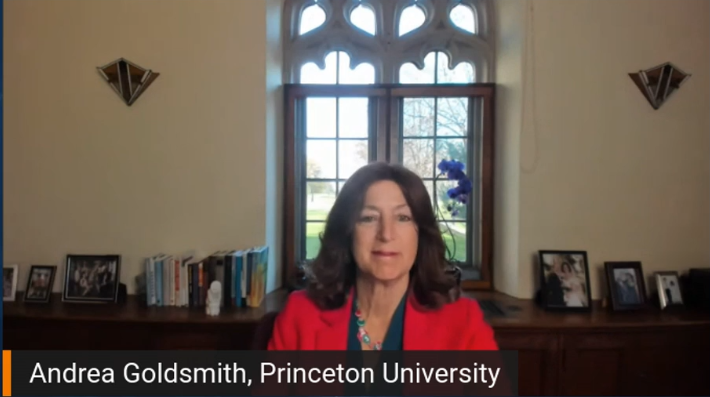