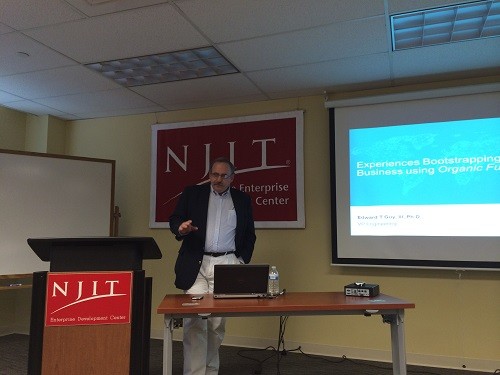 Guy discussed his N.J. startup CleverSpoke and the experiences he had had using organic funding to bootstrap it. CleverSpoke, which Guy had founded in his house, moved to  the NJIT EDC shortly after the company was started.

Guy is now vice president of engineering at Truphone’s technology center at the EDC, and it appears that the company’s fate is closely linked to that of CleverSpoke. According to Guy, Truphone grew out of the need of one of its founders — James Tagg, who lived on a farm — to use his cellphones.

When it began, Truphone used a Bluetooth connection to a PC, then sent the calls over the Internet. Guy, the author of several patents, was involved with Truphone in its early days, designing and implementing much of its early network.

Truphone received seed funding and, after several funding rounds, morphed into a 700-person company whose mission is to provide communications services for those who travel internationally.

With Truphone, telephones can support phone numbers from more than five different countries simultaneously, so users can be charged local rates when they call. The technology works by changing digital identities automatically and over the air to swap subscriber identity modules (SIMs) effectively.

Truphone also provides a mobile voice-recording solution that has become important in the U.S. for regulated industries. For example, some financial brokers must be recorded in case they are involved in future litigation.

“From an ordinary cellphone we are able to divert their call path through a recording box that goes in our data center or on the company’s network, making their compliance easier,” Guy said.

Guy established CleverSpoke in 2009. The idea came from his son, who wondered why they couldn’t receive texts on the family’s desktop Cisco VoIP phone or even on feature phones, for that matter. CleverSpoke tried to sell the idea to the carriers but met some resistance.

So the company developed a product for smartphones for use in cars. A text came in, the product read it to the driver and he or she responded to it.

Recalled Guy, “Now a car is a very noisy environment [in which] to be doing voice recognition. In order to improve this … we built a personal phrase book. If you put ‘hockey’ in your phrase book, you’ll have a better success rate when you are talking about picking up a child at a hockey game …. We had a program that basically converted your texts into interactive voice calls. In addition to reading your texts to you, the system listened to and made sense of your responses, guided by the combined system and caller’s personal phrase book … all the person had to do when getting a text was hit the answer button on the steering wheel.”

CleverSpoke arrived at the point at which it needed to grow, and instead of raising money, Guy and his colleagues decided on organic growth, he said. The company suspended its activities and took on a short consulting gig, which brought in enough money to let it go forward.

Some advantages of this approach, according to Guy, were that he and his cofounders controlled the business — they didn’t have to answer to anybody. On the downside, however, not having a board to keep them focused could be a problem. They did have great advisers who helped them tremendously, though they didn’t have any skin in the game, he said.

The result of that arrangement, Guy said, was that:

·       The company could only spend what it had. The founders would hire students, making sure they could fund them for one semester. The contract allowed CleverSpoke to cut them off at any time, but the expectation was that they could hire them for at least a semester.

·       The founders tried to drive sales via partnerships. They used integrators. They knocked on a lot of doors and tried to push their original product. However, as they were doing that, they were asked to change the product. One customer asked them to write a completely different mobile app. Most of the time, they refused. Sometimes, though, they saw that there was enough of a connection between what prospective partners wanted and CleverSpoke’s core business. In those cases, they were able to leverage their knowledge base while bringing in extra money.

·       The startup used manufacturers’ reps instead of salespeople, including a group that worked on a contingency basis. They got in a lot of doors with that approach, said Guy.

·       They looked for bargains, purchasing $15 dollar desks from Staples. They sought out discounts, closeouts and refurbished items that worked.

The other product CleverSpoke introduced was theParachute Box, a computer with as many as 32 phones on it. Truphone sent that product to 15 countries. The phones called each other to test the network. Every time Truphone deployed a new set of software, for example in Spain, it would use Parachute Boxes to ensure that it could call and text other countries to and from Spain  making sure Truphone’s data and voice network was working, Guy explained.

“One of the things about providing phone service using other people’s networks is that network settings change on a regular basis, and the carriers never tell you what will happen when. So phones and related networks need to be tested on a regular basis,” noted Guy.

While CleverSpoke still exists, Guy, his partner Chris Celiberti (who is also the CEO) and their engineering team joined Truphone in early 2012.