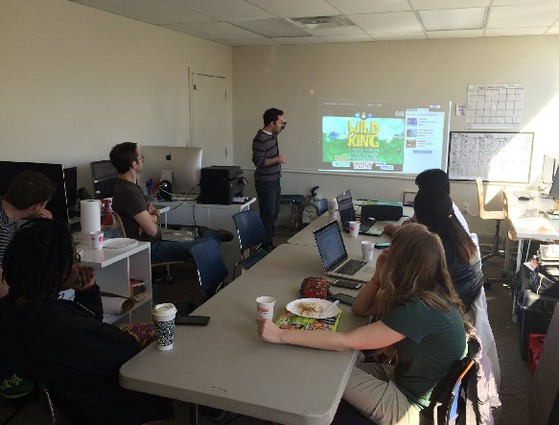 A Code for Trenton meeting | Courtesy Code For Trenton

Back in December, Code for Trenton (CfT) volunteers were alerted that many of the city’s restaurants could use a better online presence. There were enticing and unique eateries, but how could they be better found on casual internet searches? So CfT volunteers canvassed the city for the past six months, and we’ve just now essentially completed our goal.

On Yelp, CfT manually uploaded menus, and if a business didn’t have one to go, photographs of menus were taken when permitted. On Google, we tried to link a website if one existed, and if not, a Facebook or Yelp page when applicable. On both, we uploaded compelling photographs and examined details, like making sure hours and categories were accurate. Our latest automated email (pictured) from Google shows that our photographs have been viewed nearly 300,000 times since we started.

This work involved walking city streets in all types of weather to over 160 Trenton food and drink establishments. We witnessed various types of cuisine offerings, met hardworking, cordial owners and explored vibrant places that hopefully more people can discover.

Some restaurants had sleek websites and informative online menus already and some didn’t have menus at all. One interesting find was that every Chinese restaurant in Trenton had an abundance of menus along with helpful information. We later found there’s an explanation for this.

Another takeaway was branding— how being consistent with a name online can make a difference. Sometimes if a place had a “Number One” in it, it could not be found on Yelp unless we also tried a “#1,” or “No. 1.”

While some places might have been missed (there were some openings, closings and change-over during the 6 months), we hope the greater Trenton community can help adding in new places and information, while reviewing meals at establishments across the city.

CfT volunteers did not rate restaurants, however, we recognize that to better appear on searches, newly added places need to be reviewed. We hope Trentonians and others from around the country will do so. While sometimes reviewers can be brutally honest, others can be equally praising. Our group decided that making things more accessible was better in the long run.

Sites like Hidden Trenton and events like Taste Trenton continue to enhance the capital city’s reputation as a top “foodie” destination. Code for Trenton hopes that we complimented both and filled in gaps where they existed. It took many hours of walking and uploading, but CfT hopes the project is meaningful for business owners and customers alike.

The map of restaurants we covered can be located here and a database of menus is on our website.

Feel free to tell us what we missed, leave any feedback and contribute if you wish.

Previous: Interview: Phroogal Founder Jason Vitug Talks About his Book: You Only Live Once: The Roadmap to Financial Wellness and a Purposeful Life
Next: 10 Questions for Nick Groh, COO of Camden-Based RippleLocal

736 More posts in Around New Jersey category
Recommended for you

We Ask Mark Annett, “What is Side Hustle University?”